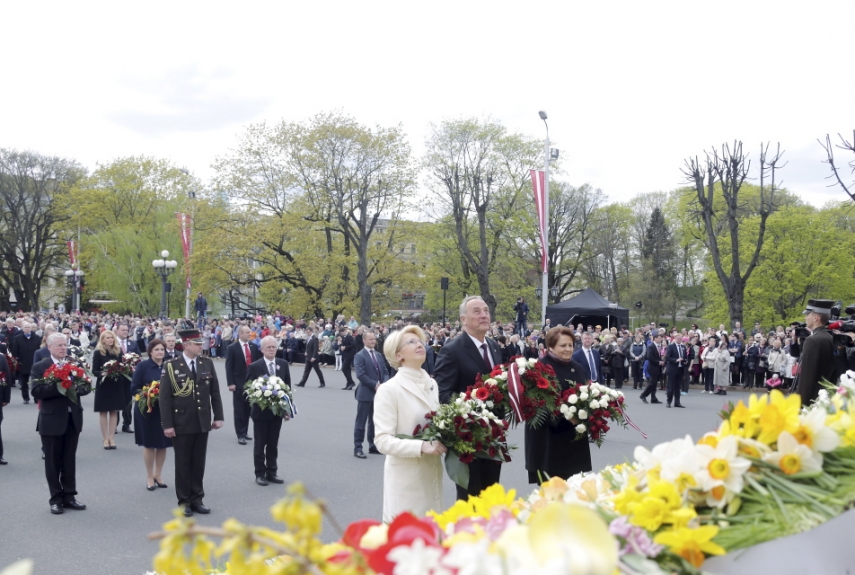 25 YEARS ON: Latvian President Andris Berzins and Latvian Prime Minister Laimdota Straujuma laid wreaths at the Freedom Monument in Riga on Monday as part of national celebrations to commemorate Latvia’s declaration of Independence from the Soviet Union on May 4, 1990.

RIGA - On May 4 Latvia marked the 25th anniversary of the restoration of its independence, with a large number of events taking place in the capital Riga and in other Latvian cities and towns.
25 years ago, on May 4, 1990, the Supreme Council of Soviet Latvia passed the declaration “On the Restoration of Independence of the Republic of Latvia”, re-instituting the Constitution of Latvia of 1922. Latvia had been part of the Soviet Union for five decades prior to that, since its forced annexation at the end of World War II.
The programme of events this year in Riga opened with an ecumenical service in Riga Cathedral, and performances by Latvian schools brass bands at the Freedom Monument began at 11 a.m.

As is traditional, state officials participated in a flower laying ceremony at the Freedom Monument, the symbol of the country’s independence in the centre of the capital, and a flower carpet was created by residents at the monument.
The atmosphere at the ceremony was for the most part festive and cheerful. But speaking to The Baltic Times in a cafe close to the Freedom Monument in Riga, a number of people were less enthusiastic.
“I don’t feel concerned about this day; I didn’t even go to the demonstration,” said Olga, a student at the University of Latvia.

“We don’t have a future, even in 25 years it will be the same. Either we will stagnate or go backwards,” Olga added.
Meanwhile, the traditional Armed Forces parade took place in the city of Jelgava, featuring more than 60 military vehicles from the U.S. Army and Latvian Armed Forces, State Border Guard, State Police, and State Fire and Rescue Service, as well as demonstration flights by Italian Eurofighter Typhoon fighter jets .

The President of Latvia, Andris Berzins, made a speech in Jelgava focusing mainly on security and Latvia’s membership of NATO: “Today is not only an important anniversary of the independence of Latvia, it is a period of trouble for Europe and the entire world. The external security situation has changed, we have had to revise our priorities and pay much more attention to bolstering our defense capacities. Latvia’s accession to NATO was, historically, the right decision, of crucial importance. During the eleven years we have been members of the Alliance, we have proved that Latvia is a reliable partner,” said Berzins.

As Berzins has decided not to run for a second presidential term — the first president since Latvia’s independence was restored not to do so — this will in all likelihood be his last independence day speech as president.
Berzins reminded listeners that the crisis in southeastern Ukraine began, NATO has boosted patrols over Latvian airspace fourfold, minesweepers have resumed patrols in the Baltic Sea, and the number of allied troops in Latvia has been increased; Latvia has also done much to enhance its defense capacity, Berzins noted, adding that the law now specifies that defense spending must reach two percent of gross domestic product by 2018.

“I wish to emphasise that Latvia is no less protected than any other NATO member state. I have been confirmed this during my meetings with our strategic partners, this was also acknowledged during the NATO Summit in Wales, and this resolve is proved by our allies’ actions ever yday,” the president concluded.
Inara Murniece, the Speaker of the Latvian Parliament (the Saeima), also made a speech in which she said that, although much had been achieved since the restoration of independence, Latvia is still some way from the nation that it dreamt of becoming 25 years ago.

“Today, we are still moving toward the future Latvia that we were dreaming of 25 years ago. Toward a Latvia ruled by the principle of fairness, with a more uniform set of values and ideas, where the people will consider themselves a capable and strong nation, where respect and kindness toward other people will be a matter of course, and where every citizen of Latvia will feel safe for him or herself and their future,” said Murniece, adding that much had been achieved already. She urged the nation not to be afraid of difficulties, as achieving the dream of Latvia will not be easy.

Still a long way to go

Latvia still has to do a lot to eliminate unacceptable defects in the principle of fairness that are commonplace in Latvia, said Murniece. The authorities have to be equally interested in the protection of the interests of both the wealthy and indigent residents, and the principles of justice and social equality have to be equal for all, which will also contribute to society’s trust in the state, said the Saeima speaker.

After the restoration of independence, Latvia, much like the other countries in Eastern Europe, experienced an unprecedented transition to a market economy, said Murniece. “While our friends in the West and we believed that the economy of Latvia would quickly and successfully adapt to the free market model of the Western democracies, the resources remained in the hands of those who had managed them in the Latvian SSR. Using the finances of the Communist Party, KGB and Komsomol, and their networks of contacts, the conformists and collaborationists of the soviet era became wealthy businessmen.”

“Today we can say that oligarchs, although not completely, have been ousted from the political administration of the country. But in the economy they continue to pose threat to the strategic interests of the state, concluding deals that are dangerous to the security of Latvia. Greed and lust for money pose the greatest threat to Latvia,” Murniece said, explaining that it was demonstrated by the influence of these persons on political parties and the government of Latvia.

However, even at the hardest times, the traditional values of the Latvian nation persevered, which is proved by the restoration of freedom following a fifty-year period of oppression and stagnation. “We were able to claim and restore our freedom,” said Murniece, adding that restoration of a national, democratic, European Latvia was supported by the majority of Latvians and ethnic minorities living in Latvia.

Other leaders Baltic leaders who could not attend chimed in with statements and letters of congratulations.
“I am glad that today, just as 25 years ago, we stand together and speak for common values such as freedom, human rights and welfare, security and peace.” reads the letter of the prime minister of Lithuania Agirdas Butkevicius..
“I am sure that our unity will continue leading our nations towards welfare and prosperity,” the letter reads.