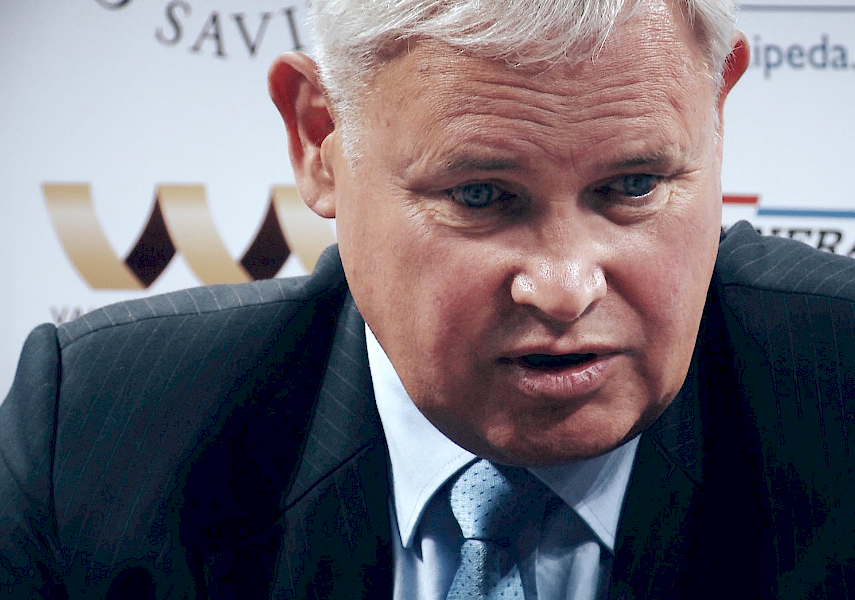 Klaipeda is the third largest city in Lithuania, but as Vytautas Grubliauskas, the city’s mayor notes, the importance of Klaipeda’s port on the Baltic coast and its impact on the country’s economic and energy interests make it arguably the most important city in Lithuania.
Besides, in summer, Klaipeda turns into a major holiday destination, with the fabulous Curonian strip accessible within ten minutes by ferry. In a recent interview, Grubliauskas kindly agreed to answer some questions for The Baltic Times.

What were the biggest projects implemented in 2015?

Every project that involves improving our residents’ quality of life is important. Without any exception, there have been a number of projects which have made the city more dynamic, innovative, and ambitious. The epithets like “ground-breaking” or “state-of-the-art” may not suit them, but their importance is of no less importance.
2015 has been a year that has made Klaipeda an even greater symbol of Lithuania’s energy security and independence. With the liquefied natural gas terminal and floating storage and re-gasification facility in their second year of operation, Klaipeda has become a major energy hub in the region, which I am very proud of. Our city is known for its lively atmosphere and thriving port. I hope that Klaipeda will remain that way in the future.

Has there been any major investment in the city’s free economic zone (LEZ)?

In terms of population size, Klaipeda is the country’s third-largest city. However, it surpasses Kaunas and Vilnius in certain key financial indicators. What are they?

It’s hard for me to submit all the statistics off the top of my head where we stand better in statistical rankings. After being on top for four consecutive years in the Lithuanian Free Market Institute’s index of municipalities, Klaipeda has dropped this year to the second place allowing Vilnius to outrank it.
It is still a very good result, though. What put Vilnius ahead of Klaipeda this year was the scope of investments and a higher number of construction permits issued in the capital.
Nevertheless, our city is on top when it comes to the collection of budget, the implementation of fiscal policies, and meeting fiscal discipline.
What is very important to the people of Klaipeda is that our municipality allots most of its budgetary resources for the public sector, and calculates it per capita. If we were to weigh Klaipeda’s impact on the country’s economy and budget, its influence on the state’s key energy issues, then our city is definitely higher than third. We are right behind Vilnius on many other issues, too.

Talking of state investments into Klaipeda county’s municipalities over the last couple of years, you have to agree that Palanga is the one to have obtained the most money per capita. What do you make of it? Is its left-leaning government always responding promptly to Klaipeda’s needs? Do you share the opinion that some of the municipalities out there are more “loved” than the others?

Speaking diplomatically, I would not use the words “loved” or “not loved.” If anyone, like you, gets this impression, there’s perhaps some groundwork to think that way. As to not be mistaken with the conclusions, the best thing to do would be to go over the facts and numbers. They show best who is being favored and who not …
I am not in the game of “being loved or hated,” to tell the truth. Believe me or not, I am more focused on the whole region, encompassing more than just Klaipeda and Palanga, but the other five municipalities, too. So from that standpoint, I am happy to see the investments coming to the region as they boost the attractiveness of the whole region.
I am convinced the more attractive the region is investment-wise, the more prosperous the municipalities will be. That is my point.
When it comes to the comparison who gets what and who does not, I like to say this: “Let’s open our windows wider instead of looking from a small window to the single municipality’s yard.”
No municipality, irrespective of the size, with the exception of Klaipeda, is more attractive than the whole region.  I can tell you honestly: I do not envy any municipality in proximity of their investments.
But frankly speaking, there is always a desire to have a bigger piece of the cake for Klaipeda. As the municipalities’ state financing is public, one can go through the numbers and see who gets what from the state coffers.
I am not willing to comment on the distribution, but let me draw your attention to Klaipeda’s Castle Museum, an object of national importance. After the allocation of state investment funds for the first stage of its construction, it has been effectively left on its own thereafter.
Although the project and its status have remained the same throughout, the burden of having it completed was put solely on the municipality’s shoulders. I’d say unfairly. Certainly, it is not a sign of “love” for our municipality, or at least the castle project. I do not feel like hitting anyone out there, although I cannot deny sometimes having a bitter feeling over the situation.

With the ongoing construction of a liquefied natural gas (LNG) terminal and awaiting the floating storage and regasification jetty (FSRU), (The Independence), Klaipeda was showered with the then-government’s promises to ramp up the seaport’s infrastructure. In fact, you were at the helm of city back then, too. Have the pledges been met? Does Klaipeda benefit from accommodating the country’s energy security guarantees — the LNG terminal and FSRU?

I don’t think it would be very ethical to calculate how much Klaipeda benefits from the terminal. Employment-wise, very few Klaipeda residents work there. Let me say this, however — there is no direct financial benefit for us from the facilities.
As you mentioned, there have been some accords with the former government on the return from the changes that Klaipeda has undergone due to its energy projects.
The compensation package includes pledges to earmark funding for the construction of the city’s southern roundabout, Klaipeda Castle Museum, the Baltija crossroad reconstruction works, and some other infrastructure.
Of the whole package, only the project of the city’s swimming pool has moved forward, securing nearly all the necessary funding. The castle museum project has, regrettably, hit a snag after the first stage of its works. As far as the Baltija crossroad project is concerned, only one of the three streets have been finished, so to wrap it up, there were a whole lot more promises and hopes from the conservative-led government than we see now.

How is the Liberal-led Klaipeda’s relationship with the Social Democrat government?

I’d say that it views the predecessor’s pledges responsibly. Relatively so, I’d add. Understandably, it must be hard for the government to 100 per cent carry out all the commitments given to our city before the LNG terminal construction.  Unfortunately, there is often lack, or absence, of continuation of the policies with the change of power in Lithuania. I am happy, however, with what has been done, but I’ve got to add that there’s a whole lot more incomplete projects. I hope a new government sworn in after the parliamentary elections next year will be more considerate to Klaipeda’s needs.

Thanks to Klaipeda, Lithuania can claim itself to be a maritime nation. Do you believe Lithuania will be able to keep this status after the demise of the Lietuvos juru laivininkyste (Lithuanian Shipping Company)? JSC Baltlanta, which operates a fishing fleet, is said to be in uncertainty, too.

I think that Klaipeda will not go off the map as a seaport any time in the future, so Lithuania will remain a maritime nation. I have no doubt about it. Needless to say, I feel bitter seeing the bankruptcy procedures against the Lithuanian Shipping Company, but Klaipeda Municipality has nothing to do with that as it is a state-run company. The bankruptcy, as any other, spells nothing good for the city.  We may see an increase in the unemployment rate as 200 seamen are expected to lose their jobs. Every single case of job loss hurts both the individual and the city.

You are about to wrap up your first year of the second term as mayor of Klaipeda. What targets have you set out for it? Did you ever give a thought to your legacy?

To begin with the last part of the question, I am the least worried about what you call the “legacy” of my time as mayor of Klaipeda. One of my proudest moments was the recent opening of the Klaipeda Drama Theatre. It looks marvelous and, I hope, it will boost the city’s cultural life. My eyes now are set on the Musical Theatre, which has just started its refurbishment. I really look forward to seeing this culture center open.
There’re also other infrastructural objects that need to be revived or built. They may not be called “visionary,” but they will definitely improve the quality of life for Klaipeda residents.
Our long-term task is to establish a business environment, which would constantly spur the city’s growth and increase the population. Then we will see not only more industrial investments coming here, but academic investments, too. I really believe that the future of Klaipeda is hinged on its youth.

In a recent ranking of Lithuanian universities, Klaipeda University sits on the very bottom with only one of its 32 study programmes recognized as the best in the country. Does city have any tools to change the performance of its university?

Well, Klaipeda Municipality is not the founder of the educational facility, which, as all the others out there, is quite autonomous. I am aware of the ranking results and I do not feel good about them. What surprises me is that some of the maritime studies-oriented programmes have not got any interest among students. This is something to think about. I reckon the quality of the studies could be desirably better. Second, we perhaps need to do some more work in explaining to our young people what career opportunities being a maritime nation and living in a seaport city gives. It will take time to understand, I believe.
Klaipeda Municipality has established city grants to motivate young scholars and talented students. We want them to focus with their theses and doctoral studies on the problems Klaipeda faces. But I have to admit that sometimes we have very few works of this kind submitted for evaluation.
The university’s potential is big, but it has to resolve to carry out some core changes.  I reckon they are inevitable in order to stay competitive among other universities. The new rector faces really big challenges, but I want him to know that the city is always ready to stretch out its helping hand.