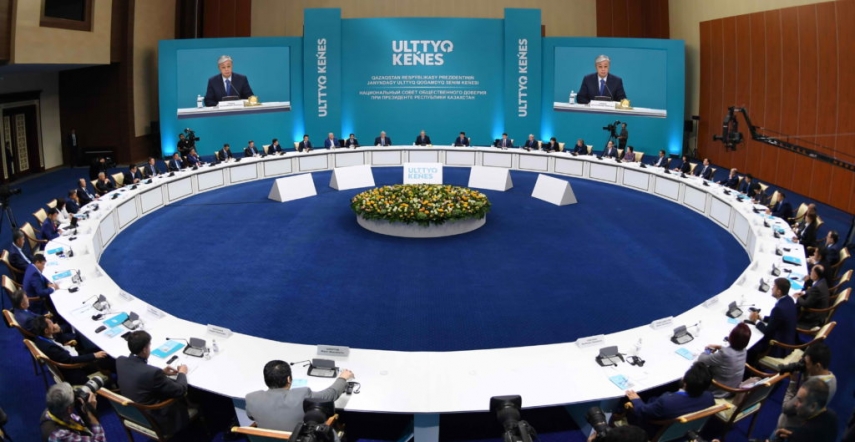 Nazarbayev's resignation was only the second time the president of a former Soviet republic has stepped down voluntarily. Russian President Boris Yeltsin was the first to do so in 1999.

In accordance with the Constitution, the then-speaker of the upper house of Parliament, Kassym-Jomart Tokayev, took powers as the interim president of the oil-rich country and later won the presidential elections by a majority decision.

For many experts, the former Director-General of the UN Office at Geneva looked as a “dark horse” but after his first two years in the post Tokayev has managed to overcome the tough challenges that popped out from nowhere.

1. Continuity – the effective continuation of the political course set by First President Nursultan Nazarbayev, and the preservation of all positive achievements.

2. Justice – equality of rights for all citizens, regardless of their social, ethnic, religious, or other affiliation.

3. Progress – social renewal in all spheres of society; the implementation of constructive changes for the benefit of people with the aim of becoming one of the leading countries of the world.

New domestic political paradigms have been proclaimed: “Hearing state”, “Various opinions – one nation”, “successful economic reforms are impossible without modernization of the socio-political life of the country”, “a strong president – an influential parliament – accountable government”.

The driving force of this paradigms is the National Council of Public Trust established in June 2019. Its main goal is to develop proposals and recommendations on issues of state policy based on a broad discussion with representatives of the public.

The first package of reforms was presented at the meeting of the National Council of Public Trust on December 20, 2019. They were implemented ahead of the parliamentary elections which took place on 10 January, 2021. They included halving the registration barrier for creating political parties; introduction of 30 percent quota for women and youth on electoral party list; formalisation of strengthening the institution of parliamentary opposition; initiation of decriminalisation of Article 130 (defamation) and the humanisation of Article 174 (inciting social discord) of the Criminal Code; preparing a new law on assemblies, which made it easier to organise and participate in rallies; Besides, Kazakhstan has joined the Second Optional Protocol of the International Covenant on Civil and Political Rights, abolishing the death penalty.

The second package of political reforms was put forward by President Tokayev on September 1, 2020, in his Address to the people of Kazakhstan. The reforms included transition to direct elections of rural akims (Mayors) from 2021; an instruction to develop a Concept for the Development of Local Self- Government and the Law On Public Control”; creating a single institution for online petitions; establishing improved legislation to combat torture, human trafficking, and protect citizens (especially children) from cyberbullying; preparation of tentative documentation to accede to the Optional Protocol to the Convention on the Rights of the Child on a Communications Procedure.

The third package of political reforms includes reducing the threshold for political parties to gain seats in the Mazhilis (lower house of parliament) from 7% to 5%; introducing the option "against all" in the ballots for all future elections; legally formalising the institution of online petitions; adopting an additional law on the Commissioner for Human Rights – the ombudsman; strengthening the Office of the Commissioner for Human Rights, including the creation of its regional offices; implementing the Youth Development Index to evaluate the efficiency of youth policy; providing measures to stimulate the activities of charities.

To closely monitor all reforms Tokayev created the Supreme Council for Reforms under the President to consider and make decisions on the implementation of new reforms. Besides he increased the responsibility of the state servants by reducing them by 25% and introducing of the factor-point scale of remuneration of civil servants.

Before and amidst the adverse circumstances of COVID-19 Tokayev carried out the timely social reforms as the repay of the debts on loans of low-income citizens in second-tier banks and microfinance organizations and introducing the opportunity for interested citizens of the country to use their pension savings to improve housing conditions and pay for medical treatment.

Tokayev made clear signals he wants to make human capital as the main resource of Kazakhstan by launching the special program "Ansagan Sabi" commencing from 2021 with the provision of 7000 quotas for In Vitro Fertilization (IVF), ensuring that by 2023 the level of wages of medical workers is 2 times higher than the average wage in the economy, determining the list of basic medicines and medical products that should be produced in Kazakhstan, providing all remote and nearest inhabited localities with medical and obstetrical stations.

He pushed forward education reforms, including two-fold rise of salaries for teachers and university lecturers, and increasing scholarships for future teachers, establishment of a single integrated online educational platform, measures to create equal opportunities for children to receive a quality education, measures to support secondary schools to bridge the gap between urban and rural education, development of the Concept of lifelong learning (continuous education) and allocation of 500 grants to provide scientists with internships in leading scientific centers of the world.

Tokayev’s economic reforms have much more complicated algorithms but they promise to promote foreign investment and give support to innovative small and medium-sized industries. For this Tokayev charges local governors (akims) with helping to recruit foreign investments to their territories, a dramatic enhancement of their duties.