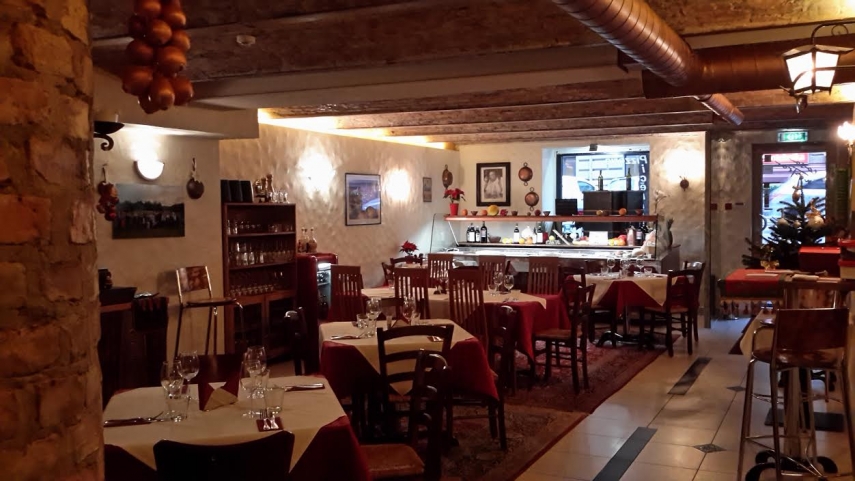 Casa Nostra is a freshly-opened Italian restaurant in central Riga, run by Adriano Carlesi and Sandra Klavina, a Latvian-Australian who has lived in Rome for 20 years. I had the good fortune to meet this charming couple during a recent trip to Sicily, the largest island in the Mediterranean.
We were there as part of a Baltic business group to promote trade relationships between Italy and Latvia, an event organised by the Sicilian Chamber of Commerce in Catania.

“The event was to showcase to Baltic food importers, the produce and products from Sicily, and the Catania region,’’ said Sandra.
In many respects, the couple see themselves as the de-facto gastronomic ambassadors of Italy to Latvia; they have as their mission the promotion of Italian cuisine, cooked by their Italian chefs, who the couple see as artists possessing a vision and a passion, and who share their mission. “We source high quality Italian ingredients and products, not only from Sicily, but throughout Italy,” says Adriano.

“We also have a developed network of Latvian companies which we support through goods they also import directly from Italy,” he adds, “providing a win-win situation for our restaurant, and the Latvian economy.”
Casa Nostra is a genuine reflection of the couple’s character and relationship, a place they have created which makes guests feel comfortable, happy, and positive.

“People come to eat and dine at Casa Nostra for the experience also,” says Adriano.
The experience begins from the moment that one enters Casa Nostra; everybody warmly greets you when you enter, and even the chef interacts with incoming diners. The restaurant prides itself on this openness and familial warmth.
“There is no need for us to say we are trying to create an authentic Italian experience. We are Italians who know our food traditions and Italy’s numerous regional cuisine cultures,” said Adriano.

In fact, when you enter the Casa Nostra restaurant, you are overcome with the feeling you are in Italy, not Latvia.
“People who visit Casa Nostra feel they are becoming part of a meaningful experience. Becoming part of our culinary movement, but also becoming part of a public discourse in Riga, through the cultural nights which we organise.”
He points out that one of the dining areas is equipped to hold business events centered around the dining experience, and various social events — like the teaching of Italian language courses.

In reviewing Casa Nostra, I came prepared as one also holding a rich Italian culinary tradition. Cooking and food was not a passion for my Italian parents; it constituted their way of life. I felt a similar spirit at Casa Nostra.
Introduced to new olive varieties, and tempted into ordering a white lasagne with walnuts interspersed between the pasta sheet layers, topped with truffles, I was also treated to one of the finest Sicilian wines I’ve consumed. Without doubt, it was one of the most exquisite Italian dining experiences I can recall.

It brought me right back to our trip to Sicily, and dining at the foot of Mount Etna.What one takes away from the city of Catania and the region, is the sense of awe and respect in which the local inhabitants speak of Mt. Etna. The 3000  Mt. Etna is spoken as ‘iddu’’ (him), in a manner which makes one think, that a family member is being spoken of.
“The volcano is venerated and yet feared. Eruptions has turned this region around Catania into one of the most richest agricultural regions of Italy in which in an extremely fertile soil vines and citrus fruits thrive,” said Sandra.

Sandra jokingly adds that she read that Mt. Etna being likened to an enormous house-cat that quietly purrs, awakening every now and then, it yawns,  stretches lazily and accidentally paw at this or that valley destroying towns, gardens, and vineyards. This is a volcano of risk and geology, but moreover, culture and myth, once stated an Italian writer.
“There are also several wines characterized by Volcanic soil from the region of Mt. Etna and Catania,” said Adriano.
“The volcanic soil of the region has high levels of potassium,  which in conducive to the wine products final quality.’’
“The grapes from the region around Mt. Etna have high potassium, hence are sugary. What potassium in the soil does is that it assists in the development of the leaves, helping to carry nutritional elements around the entire grape plant.’’
“For many wine producers in Sicily, geology is of utter importance in wine production  to obtain the prestigious DOC classification,’’ stated Adriano.

A Sicilian wine marked DOC is produced in a specific, well-defined region in Sicily, according to defined wine making rules that are designed to preserve local traditi
The rest of the menu is also devilishly tempting — including pizza; a huge and impressive Italian antipasti buffet; traditional pasta dishes such as Amatriciana and Caccio e Pepe, Lasagna, Ravioli; and main dishes such as Saltimbocca and Fiorentina and specials of the day that change regularly.

“A number of our guests have said that Chef Francesco Gallina’s tiramisu dessert is the best they have tasted. One can drop in for a quick plate of antipasti from only five euros, basket of focaccia, and a glass of wine or can choose from the a la carte menu and linger to enjoy the ambience,” said Adriano.
The values of Casa Nostra, Sandra notes, which are pinned up on the restaurant’s wall, “aim to be not only a workplace but also a meeting place. A meeting of people and of minds.”