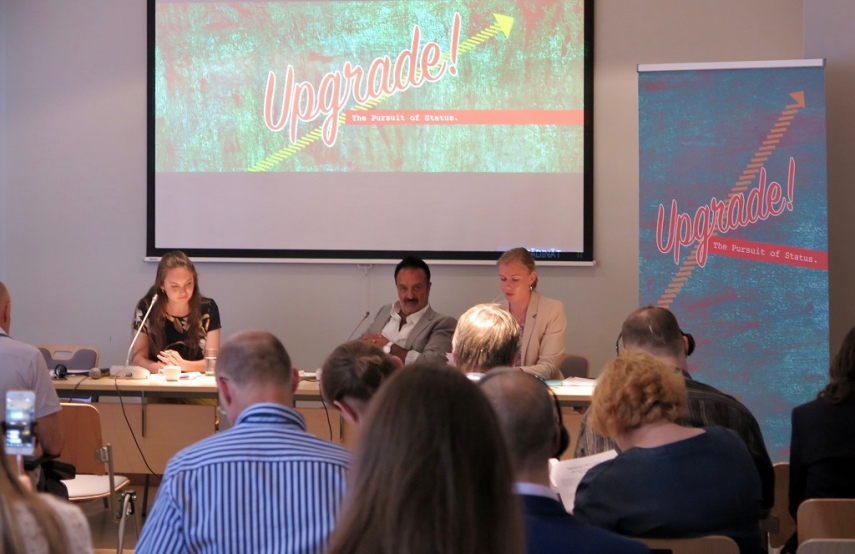 RIGA - The first Baltic UPGRADE2018! networking event in Riga, in the frames of international collaboration initiative “Upgrade2018!” provoked discussion and cooperation ideas. The event took place at the House of European Union, Riga 28-29 May, bringing together cultural and societal players within the Baltic region. The event was chaired and based on initiative by Cultural Counsellor Veijo Baltzar (Finland) and Creative Association for Arts and Culture DROM. The participants included international art professionals from Russia, Estonia, Finland and Latvia, as well as NGOs, officials and politicians from Latvia.

The event took place under the auspices of Ambassador of Finland in Latvia H.E. Olli Kantanen. Ambassador Kantanen inaugurated the Upgrade2018! meeting on Mon 28 May. He noted that culture and intercultural understanding play an evergrowing role in sustainable development also on the global level. He mentioned the Northern Dimension Partnership on Culture (NDPC), promoting people-to-people cooperation involving a wide sphere of society. The agreement of establishing NDPC’s secretariat in Latvia was signed in Riga on the very same day. Finland currently chairs the strategic committee of NDPC.

The pursuit of the cooperation initiative “Upgrade2018!”, co-founded by Nordic Cultural Point, is to identify a common foundation for international long-term cultural collaboration for the purpose of promoting Intercultural Dialogue and sustainable future of multicultural Europe. The cooperation strategy of the Baltic region, developed during the meeting was based on a discussion of 20 cross-disciplinary law initiatives by Cultural Counsellor Veijo Baltzar for renewing European Union’s policies of multiculturalism. Baltzar’s objective is to offer European societies innovative tools to build sustainable and egalitarian multicultural Europe.

Veijo Baltzar’s law initiatives were regarded as forerunners of science, art and cultural life of the future, that have potential to create space for sectors of culture and creativity that have been marginalized by organized societies.

“Veijo Baltzar’s law proposals are a topical initiative, the promotion of which in a dialogue with art-oriented projects could be a fruitful combination,” Latvian Member of Parliament Artis Gustovskis told.

“Veijo Baltzar’s law initiatives are ingenious document. We are talking about totally new direction of development of society, which is challenging, but not impossible to achieve. If Baltzar emphasized less the Roma issue, he could become a European-wide opinion and cultural leader. That kind of leader is lacking in Europe,” thinks Artūrs Avotiņš from Happy Art Museum, Latvia.

Issues related to multicultural Europe provoked discussion. It was noted that in the global context also Baltic states such as Latvia appear in a position of a minority.

Issues of status and target groups of multicultural activities were actively discussed. It was emphasized that minority cultures are often provided amateurish marginal opportunities within European societies, depriving them from societal status needed for building intercultural dialogue on an egalitarian basis. It was demanded that in promotion of multicultural art were involved highest decision-makers, leading figures and institutions of society. National minorities do not possess enough resources to survive alone: empowerment requires cooperation with majority and renewing societal structures.

”In this meeting I heard for the first time ever, and at this level, speaking out loud about losing spiritual values in modern societies. (…) The problems of hate can be solved only by methods of spiritual-intellectual solutions. It needs influential ambassadors like Veijo Baltzar who have courage to talk about these issues in order to end discrimination of art and creativity,” emphasized Oleg Shaposhnikov, Director of Daugavpils theatre.

The participants of “Upgrade” meeting reached wide consensus about the role of European multiculturality and its needs for future development, as well as about the significance of arts and culture in building intercultural dialogue and sustainable future societies. Seminar resulted in cultural initiatives for the future and a cooperation strategy among its participants, which will be publicized later.

Member of Parliament of Latvia Artis Gustovskis noted that according to EU, creative industries and innovations are an asset for future’s tourism. The mayor of Kuldiga had given a mission to Mr Gustovskis to promote these issues in his county, and according to Gustovskis, Veijo Baltzar’s and Drom Association’s activities represent them in particular. The parties agreed to establish international cooperation based on the aforementioned objectives.