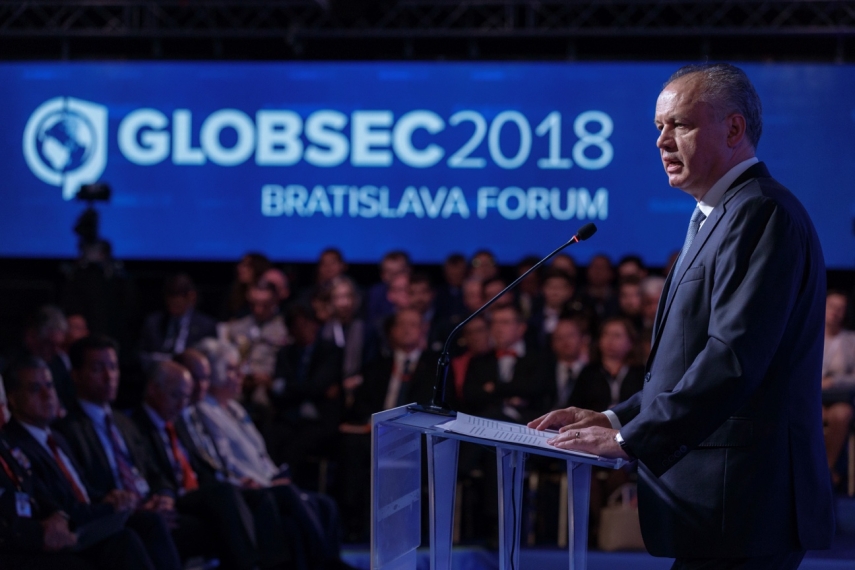 The Baltic Times provides with a transcript of the Opening Speech delivered by Andrej Kiska, President of the Slovak Republic, at GLOBSEC 2018. In the twelve years of its existence, GLOBSEC Forum has grown into one of the top strategic forums worldwide for connecting the realms of politics, academia, the non-government sector, and business. GLOBSEC Forum has become an essential meeting place for political and business leaders, visionaries and innovators.

As every year, I am glad to open this conference, which contributes many great ideas helping to solve our common problems and challenges. I am proud to see prominent politicians, experts and media representatives in Bratislava again. The special focus of this year’s program on artificial intelligence and innovations in the digital domain is well chosen.

Our security is not only the troops we are able to deploy or the tanks we have. In the world we live in, leadership in cutting-edge technologies is what makes the difference in our ability to defend ourselves. As we can see in cyber-attacks, interference in the elections in Europe and in the US, or in massive propaganda, we face, it´s not a question of some distant future.

Many of you know my affection for innovations and start-ups. But today, I will remain rather conservative and focus on one issue that I consider highly urgent and relevant. Here in Central Europe, as well as far beyond the borders of our region.

The issue of unscrupulous politics. The one that pushes us out of our traditional space, where values of freedom, democracy and dialogue rule over autocracy, aggressive enforcement of purely selfish interests, and breaches of international norms. The unscrupulous strategies, tactics and actions undermine the foundations of our democracies.  And it is often our ignorance, myopic decisions, and lack of resolve that allow such rudeness to spread.

We can certainly rely on democracy to keep the unscrupulous politics at bay. But only if we consistently uphold its fundamentals — independent media, lively civil society and strong institutions. Otherwise, people lose trust in democracy and turn to autocratic leaders who promise to deliver order and protection. Let me dwell now on the aforementioned fundamentals.

Media play an incredibly important role. Free and independent journalism is and must remain a cornerstone of our democratic societies. Journalists are true guardians of democracy, often the first to spot where politicians prefer their interest rather than public ones. They debunk corruption, where institutions turn a blind eye. They keep politicians and public officials accountable. They signal when those in power become arrogant.

Sadly, for the same reason, journalists become targets of disparagement or harassment. Confrontation, oral or even physical attacks are not rare. Without noticing, a climate of hate is being gradually created and accepted – portraying journalists as enemies of political representation or even of the nation.

They can be stigmatized as those who undermine the stability of our systems and weaken our societies by spreading doubts about elected representation.

Sadly, we see more of such behaviour in the recent years. We are witnesses of attempts to eliminate the freedom of the press, to persecute independent media, or to get them under control of private capital often linked to ruling elites.

A tragic event, a horrible murder of a journalist and his fiancé moved us all in our country. A journalist, who was threatened, who sought assistance and protection from the authorities and who was ignored. Just because we have already pushed the limits of our sensitivity too far. The price we paid was too high. As it is in every single case when journalists are oppressed by those who believe in the fake aureole of absolute immunity given by the power of positions they hold.

The tragic death of the young couple triggered a society-wide movement. Tens of thousands people went to streets for a single reason – to demand a decent country to live. What a wonderful example that one of the pillars of democracy – a lively civil society – is strong in Slovakia. And it has brought first results that give us hope things can really change, even though there is a long way to go. Active citizens play a crucial role in safeguarding democratic principles.

The movement of people was a demonstration of how fragile and how low the confidence of people in the institutions is. It was an answer to unscrupulous politics of domestic elites. It was an answer to ignorance of calls of people for a decent country. A reaction to frustration when their rights and expectations were neglected. It was their firm stance against corruption, against misuse of power and cronyism, against allegations of connections of those in power with organized crime and the lack of dedication to deal with issues such as quality education and health care and many other areas.

I can assure you, none of it makes me, as a president of this country, happy. But it also proves, that the foundations of democracy and rule of law are strong enough to resist those, who ignore it

These democratic pillars are no less important when it comes to strengthening our European project. There are many voices questioning it. In the whole region, as well as in Slovakia, we can see perplexing political signals undermining our European and Transatlantic identity, supporting the narratives of propaganda or hesitant display of solidarity with our Allies. They picture the EU and NATO as thieves of our sovereignty.

I can see a danger of unscrupulous domestic politics dragging the whole Central European region backward. Sadly, at the time, when Europe needs strength and unity to address the challenges we all face.

Every time we get criticized for it in Central Europe, we strike back that we are success stories. That we are doing economically well. The whole region does. So it means we must be right. Well, it´s common sense, but let me repeat it anyway — there would be no economic success without the EU in Central Europe.  And no economic growth can outweigh democratic deficiencies or selfish national interests endangering our European project. If there is one thing we can´t afford anymore, then it is another division of Europe. The driving forces of the European consolidation will not wait until we come back to our senses.

I am fully convinced there is no alternative to our EU and NATO membership. Almost 75% of Slovaks support our membership in the EU. This country tries hard to fulfil its commitments to NATO. We will soon send our troops to Latvia. Not just for the sake of some exercise. But to strengthen our collective defence against the existing threats. And if there is a need for a collective response one day, be sure Slovakia will be part of it. Because we are NATO. Because we are the EU.

But we don’t suffer only due to our domestic deficiencies. We face the consequences of unscrupulous, aggressive and arrogant politics in international affairs too. Although we often hear that dialogue, mutual understanding and respect for international norms are the best tools to win confidence and solve problems together, we experience just the opposite. The threat of nuclear conflict resonates today much often than we could have imagined in the past years. The use of chemical weapons against civilians in Syria by its own regime has occurred so many times unpunished. When we hear about allegations of poisoning or otherwise attacking those who are criticizing Kremlin, we are not surprised anymore. We openly speak about Russian spies active in our countries. And many politicians, my country included, turn a blind eye thereto. We face propaganda and hoaxes attacking our societies, and we do not search for its originators. Because we already know.

Unfortunately, we help make such policies efficient. The Nord Stream 2 project is an excellent example thereof. This project has serious political consequences. It is an example of purely selfish economic interests at the expense of stability and prosperity of our immediate neighbourhood. We send a signal to Russia about how short-sighted we are in our policies.

The assistance to Assad´s regime is yet another perfect example of exchanging the principles of humanity for the immediate political gains. How shameful it is to claim that peace and stability in Syria can be achieved through helping the person that ordered his own people to be tortured and attacked by chemical weapons.

All of these things happen just because we have shifted the limit of our tolerance of unacceptable far beyond what was acceptable few years ago. Just recall how strict we were about the situation of civilians in Libya, or about the chemical weapons in Syria. How decisive and prompt we were in our resolute action.

Today it seems we don´t care enough. Sometimes it seems as if we didn´t care at all. It seems like being unscrupulous in international affairs is enough to discourage us from proper and resolute actions and answers. We have bent our own values and beliefs to an aggressive policy of our opponents. To those, who attack our societies by propaganda. To those who kill their own citizens by chemical weapons for the sake of survival of a tyranny. To undemocratic regimes, pretending to be peacemakers while waging war not for peace, but for repairing a lost national pride and to regain a place among major world players. And to those, who send their troops to steal land of sovereign states.

What is the limit where we will have no option than to act with resolve against the unscrupulous politics – at home, in the region, or globally?

There is only one solution. We need to win back the space we have abandoned. All democratic forces, all politicians sharing the values of freedom and democracy must be united and strive for dialogue, understanding, respect for human lives, international norms, and principles. We need resolute collective actions which prevail over selfish national interests.

Globally in engagement in conflicts like Syria, Iraq, Yemen, in challenging undemocratic regimes and tyrannies.

In Europe by strengthening our unity and will to do things together instead of questioning the foundations of the European project. And in the region and at home by safeguarding our democracies, rule of law, fighting corruption and misuse of political power.

Because at the end of the day, the unscrupulous politics only wins when those of values and principles lose the grip or even give up on defending the space that makes our societies democratic.