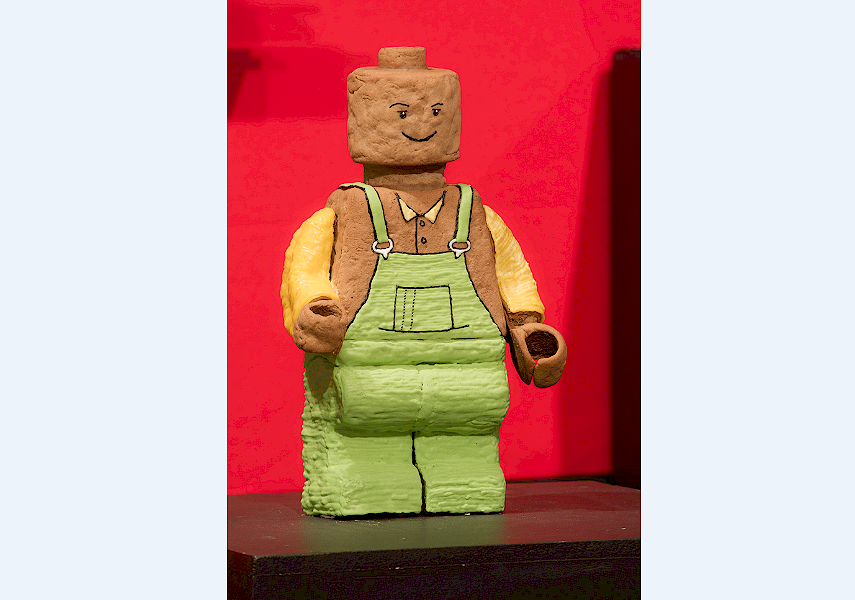 GINGERBREAD LEGO: Just a few of the delicious artworks.

TALLINN - When Mari-Liis Laanemaa was growing up in Estonia, every Christmas her artist family would make intricately designed gingerbreads. And until she went to university, she thought this was what every family did. When she realized it wasn’t, she wanted to do something to keep the tradition alive.
Now, this year, Laanemaa and partner Pelle Kalmo will hold the 10th annual Gingerbread Mania exhibition in Tallinn.
“Gingerbread has taken over our lives,” Laanemaa laughed when she spoke to the Baltic Times over coffee last month at the Design Gallery on Parnu mnt where the exhibition will be held.

Started in 2006, Laanemaa and Kalmo invited the artists, architects, and creative types they knew and held the event in a small gallery in Tallinn’s Old Town.
“The idea was that people should make a design out of gingerbread, rather than it being an exhibition of gingerbread,” Laanemaa said.
During that first exhibition there were 21 gingerbread sculptures, including a dress made of panels of biscuits, and a chandelier. This year more than 100 will take part.

There are no rules to what each person can make as long as it follows the set theme, which this year is “Holy Gingerbread.” The exhibition is not a competition, although there is a vote by visitors for the best design.
This year’s theme echoes the traditional beginnings of gingerbread, which used to be eaten only by the rich as spices were too expensive for the mass market when they were introduced to Europe in 999 A.D. by Armenian monk Gregory of Nicopolis.

Gingerbread biscuits were first documented as being sold in the 17th century to monasteries, pharmacies, and town square farmers’ markets.
In the Baltics and Scandinavian countries gingerbreads are traditionally quite thin and fragile and in Estonia they are called piparkoogid. They are associated strongly with Christmas.
For Gingerbread Mania, each exhibitor is given the same dough mixture to give everybody the same starting point and keep costs down. Ideas are submitted beforehand, but the end results are not seen until the day before the exhibition, when the show is set up.

“It is always a surprise for us to see what people bring,” said Kalmo.
And over the past decade they have gotten more and more extreme.
For 2013’s Art History themed exhibition there was a life size version of Van Gogh’s Sunflowers in a vase, and last year for Toy Shop there was a 3D rocking horse which rocked back and forth.
“It’s really funny to see how each group approaches their design,” Laanemaa laughed. “We have architects who make 3D models on the computer before they start building and we’ve even had a group of product designers who used a laser to cut their pieces.”

The first year Laanemaa and Kalmo were taken aback by how much interest there was in the exhibition from visitors and have since had to move to a bigger venue.
Last year over 16,000 people came to see the tempting treats. It’s proved so popular that one year the door broke due to being opened and closed so often.
Kalmo said visitors come from Russia, Finland, and Latvia but the exhibition is not really known internationally.
At Gingerbread Mania designs are on show without any protective cases around because Laanemaa said that one of the most important aspects is the smell.

“It is just so comforting, and we don’t want to take that away,” she said.
However, this has caused problems in the past. They now have to charge a small entrance fee to deter drunks from stumbling in. “They would try and eat and lick the displays,” Laanemaa recalled.  But children and the elderly can still visit for free.

There have also been cases of people accidentally pushing the models over, which sees the thin gingerbread crumble “into a million pieces” which Laanemaa describes as a “tragedy.”
Speaking about his love of piparkoogid, she said: “In Soviet times you couldn’t get hold of the spices in Estonia and usually people bought them from Finland.
“It was a very special thing to get good quality gingerbread dough and spices.”
The biggest casualty of their commitment to the exhibition is that Laanemaa  barely has time to bake the biscuits at home with their three children. Each year Gingerbread Mania runs for three weeks in December and Christmas gets lost in the preparation.

“It’s a bit sad really,” she said. “But there just isn’t time.”
The couple, who have been together for 15 years, think that the exhibition has also had an impact on how Estonians think about gingerbread.
“Over the years we have seen people take move an interest in it,” said Laanemaa. “I think we have helped do that.”