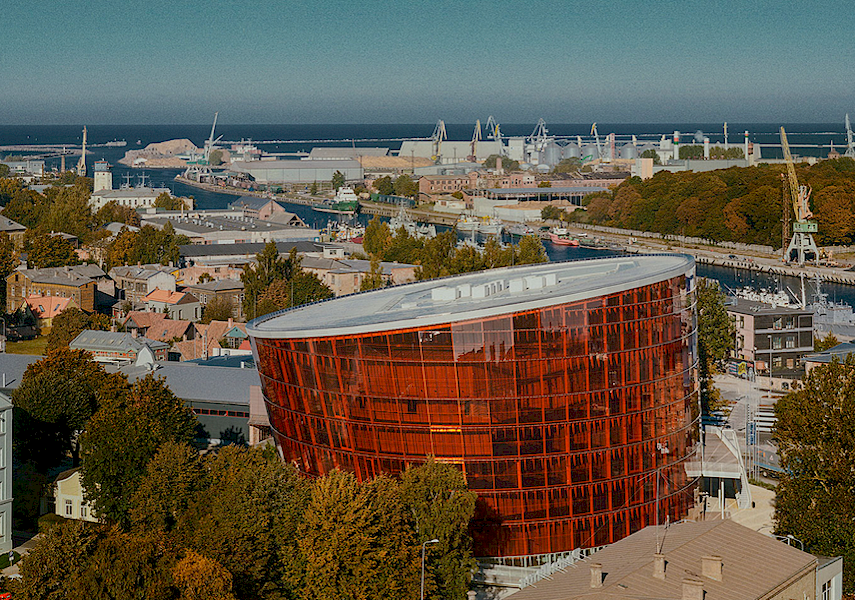 RIGA – Liepaja’s newest cultural landmark, the impressive Great Amber Concert Hall, has been officially opened. In the dark of the night its glass exterior is illuminated in orange hues, causing it to resemble a shard of amber protruding from the bowels of the Earth. The city has dreamed of constructing a grand concert hall of its own for almost a century. Liepaja’s dream has finally reached fruition.
It was at the end of the 19th century, in the year 1896, when the City Council first resolved to commence raising funds for the construction of a concert hall.

The opening concert programme featured a performance of Beethoven’s mighty “Symphony No. 9 in D Minor,” and works by two Latvian composers, both of whom have ties to Liepaja and to the new hall.
Agris Engelmanis is considered to be Liepaja’s most successful composer. His work “Music for Symphony Orchestra” was featured in the evening programme, as was the prominent Latvian composer Eriks Esenvalds’ composition “Fourth Liepaja Concert” for clarinet and orchestra, which was specially composed for the opening occasion.

The Liepaja Symphony Amber Sound Orchestra, established in 1881 as one of the first philharmonics in the Baltics, was conducted by its chief conductor Atvars Lakstigala. Lakstigala, who made a brilliant debut with the orchestra in Jan. 2010, and was  awarded the Latvian Great Music Award in 2010, conducted Beethoven’s Ninth from memory. The dynamic and confident performance was characterised by unflagging energy and piercing concentration — an impressive feat,  demonstrating his deep knowledge of Beethoven’s score.

The choir was led by the State Choir Latvija, and supplemented by the Kamer Youth Choir and two regional choirs, Intis and Ventspils.
Liepaja is the third largest city in Latvia, and the Great Amber Concert Hall now joins the Cesis Concert Hall and Rezekne Concert Hall as Latvian concert halls offering patrons a superb aural experience, although Riga currently lacks one.
Eriks Esenvalds tweeted twice about the hall, remarking on the wonderful acoustics it offered, as well as sharing his enthusiasm about the historical moment.

The architecture of the hall, designed by the Austrian architect Volker Giencke, is inspired by amber, the symbol of Liepaja and the Baltic Sea, as well as the concert hall’s function as a cultural and arts centre.
The hall’s architecture is a portrait of music, frozen in time and in amber.
Giencke is a founding member of the Graz School of Architecture and has achieved worldwide fame as the “Genius of Graz.”

The Great Amber Hall will serve as the residence of the Liepaja Symphony Orchestra, the Emils Melngailis Music Secondary School of Liepaja, and Lielais Dzintars, the concert hall’s managers and curators.

Depeche Mode to perform in Tallinn next August