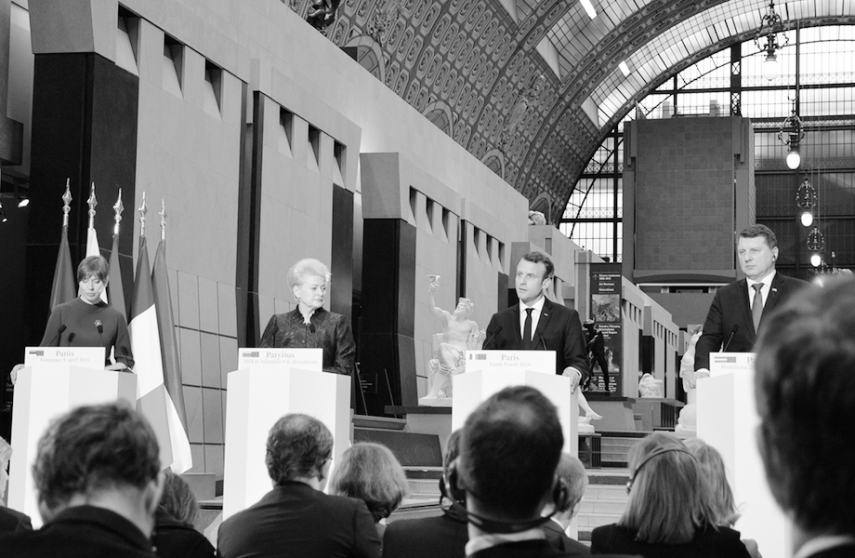 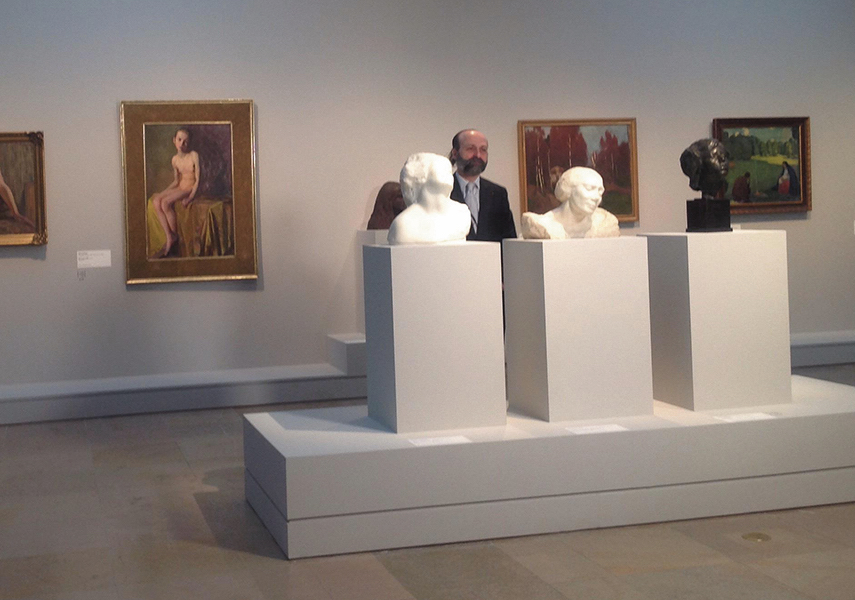 One couldn’t help noticing the heightened security arrangements in place around the Museum d’Orsay in Paris, which swarmed with heavily armed French police who’d cordoned off and surrounded the museum for the opening on Apr. 9 of the Wild Souls. Symbolism in the Baltic States exhibition. It was after the French President Emmanuel Macron had received the three Baltic presidents, Estonia’s Kersti Kaljulaid, Latvia’s Raimonds Vejonis and Lithuania’s Dalia Grybauskaite for lunch at the Elysee Palace, the 18th-century official residence of the President of France, that the Presidential motorcade departed to the museum for the official exhibition opening.

“We’re very excited and proud to have opened such a wonderful exhibition,” the Latvian Minister for Culture Dace Melbarde said to The Baltic Times at the opening, in what can be regarded as a momentous achievement in having assembled together 167 of some of the Baltic States’ most prominent works of art representing the Baltic Symbolist movement from the 1890s to the end of the 1920s,

“I’m deeply moved to see all the Latvian paintings on show in this exhibition. My personal favourite work is the Janis Rozentals’ painting Arcadia [a work of romantic dreams and an idyllic land of happiness],’’ Melbarde said.

“We expect around four million visitors to come and see this exhibition in Paris. I’m very delighted we’ve managed, that we formed such an efficient team and have further managed to build upon the good relations with our French partners.”

The exhibition which will be on show in Paris until the Jul. 15, will then travel to Tallinn where it will be displayed at the KUMU Art Museum for four months starting on Oct. 11. It will then move on to Lithuania, and end its Baltic tour in Latvia in 2020.

France’s Ambassador to Latvia, Odile Soupison, who had travelled to Paris from Riga for the opening, noted to The Baltic Times that the exhibition was the first since 1937, and serves to show the links between French and Baltic societies and their artists.

“The Baltic Symbolist painters use to work with French colleagues, and this magnificent exhibition will serve as a way to enhance the links between the Baltic region and France,” Ambassador Soupison said.

Ginta Gerharde-Upeniece from the Latvian National Museum of Art, who was one of the main curators and the head of the project stated to The Baltic States in regards to where the idea for the exhibition came from, “The Lithuanian painter, and composer Mikalojus Konstantinas Ciurlionis, considered one of the pioneers of abstract art in Europe, is well known here, and this exhibition started with Ciurlionis.”

“So as for the idea for this exhibition, you have to view the bigger picture of Baltic Symbolism, not just the one of Lithuanian, Estonian and Latvian painters and paintings, but as a concept it’s like one exhibition,” said Gerharde-Upeniece.

“The exhibition developed through a step-by-step process. Before this exhibition, if we speak about Latvian Symbolism, we’d previously organised two large exhibitions in Brussels in 2010 at the l’Hotel de Ville and the exhibition The Age of Symbolism in Latvia in Luxembourg and Poland. This current exhibition in Paris grew out of these exhibitions, as did its theme. From Latvia it started with Latvian Symbolism, which created this wider context, and the idea was put together with the renowned French art historian Rodolphe Rapetti.”

“Rapetti’s idea was to show not just Latvian Symbolism but the wider picture and value of Baltic Symbolism,” said Ginta Gerharde-Upeniece.

Rodolphe Rapetti, a vibrant and intelligent man who’s passionate about Baltic art, was the exhibition’s curator and it was he who chose all the art for the exhibition: “Thanks to the directors and curators of the Baltic art museums in Latvia, Estonia and Lithuania I had the possibility to see absolutely all the art in their collections, not only the exhibited works. I also asked to see the works in storage, and sometimes I said, pointing, “that one” to an artwork which may not have been considered an important work. Nevertheless, I took it out of storage to be part of this exhibition in Paris. As I’m a specialist on Symbolist Art, I wanted to bring in my special insight into these works,” Rapetti said to The Baltic Times in an interview in Paris at the Museum d’Orsay as he stood next to a work by Rudolfs Perle, whose art is dominated by ghostly, fantastic imagery and unreal forms, and who is considered the only true Latvian Symbolist artist.

National Romanticism, and not the term Symbolism was used by the Baltic States artists during the period. However, as Rapetti explained: “the term National Romanticism is really Symbolism, because what I chose for the exhibition in Paris are all works of art that are orientated towards the mind, soul, dreams, legends and mythology and all this is at the opposite of the major trends of the period such as observation, science, truth and intellectualism. Symbolism is an art of the mind.”

“It’s reacting to two words, the idea of naturalism and observation and the transcription of reality. Symbolism is a transcription of an inside reality, and all the works of art in this exhibition are to do with that,” Rapetti said.

When asked by The Baltic Times how Rapetti became interested in Baltic symbolism he noted that, “Perhaps it’s to do with my personality. I’ve always tried to go and explore elsewhere, so that’s what I did. I’ve given the title Terra Incognito to my essay in the exhibition catalogue concerning the Baltic States and Symbolism. I considered the region the last Terra Incognito of Symbolism, the last unexplored land of Symbolism you can find in the world.”

“People from France are starting to regularly visit the Baltic region. In Riga, they come to see the Art Nouveau. So when I now travel to Riga, I can see many people from France and hear a lot of French being spoken on the streets. This exhibition could be a good starting point in understanding how Estonia, Latvia and Lithuania have been creating themselves, not only through art, but also through poetry and literature,” Rapetti said.

“There’s also been much interest in the French press in connection with the exhibition.”

As for the narrative which Rapetti chose for the exhibition, he noted that, “I chose a thematic presentation which evolves around myths and legends, the soul, and nature.”

“In three sections which could give a mix between all the artists. It’s funny that a journalist told me that they were expecting three sections which would have been country-based, so an Estonia, Latvia, and Lithuania section. But I said that’s impossible because that wouldn’t make sense, and the interesting point is to show the differences between those Baltic artists and also what brings them together and the way they look alike.”

Rapetti considers the art represented in the exhibition to be truly great art.

“The Lithuanian artist Ciurlionis is a genius. If you imagine that one of the central ideas of Symbolism is a synaesthesia between sound and colour, because you want to hear what you see. Ciurlionis is the only symbolist who has really created with that aspect in mind because he was at the same time a composer, conductor and a painter. First he studied music, then he turned to the study of painting later in 1904,” Rapetti said.

“But when you look at a painting of Ciurlionis, for example, the painting Rex. It’s absolutely constructed as if an orchestra is performing, because we have the effects of echo and repetition of a theme. He created the idea of the King, this is the axis of the world. This is the King, this is God. But God has two aspects, one black and one white. He can be both, but the way the repetition of motifs is used is like a musical score. You have the echo of a theme with different ideas of orchestration and small spots of light that are coming in like a fugue in all his work. So for instance Ciurlionis, and the Estonian Oskar Kallis, are very important artists.”

“Another genius of the period is the [Polish-] Lithuanian painter Ferdynand Ruszczyc. His painting It Will Not Sink is an absolute digest of all late 19th-century painting. It’s an extraordinary work. It’s wonderful the way it’s painted. It’s absolutely gorgeous. You have Impressionism. You have a fairy. You have night. You have imagination. You have fantasy. The idea of painting the sea like a mountain and the boat on top of that mountain. It’s so subtle. So intelligent. And the stars look like fireworks. And it also has a Wagnerian idea inside, The Flying Dutchman. So it’s kind of a digest in the way it’s painted. It’s original and it’s fantastic. I love this painting,” Rapetti exclaims, lost in deep concentration, with his eyes gazing at a work of art, that as a French man, which was painted by a Lithuanian, both captivated and moved him, showing that great art has no national boundaries.

Wild Souls: Symbolism in Baltic Art is on show in Paris at the Museum d’Orsay until the Jul. 15. The exhibition will also be on display in Estonia, Lithuania and Latvia.