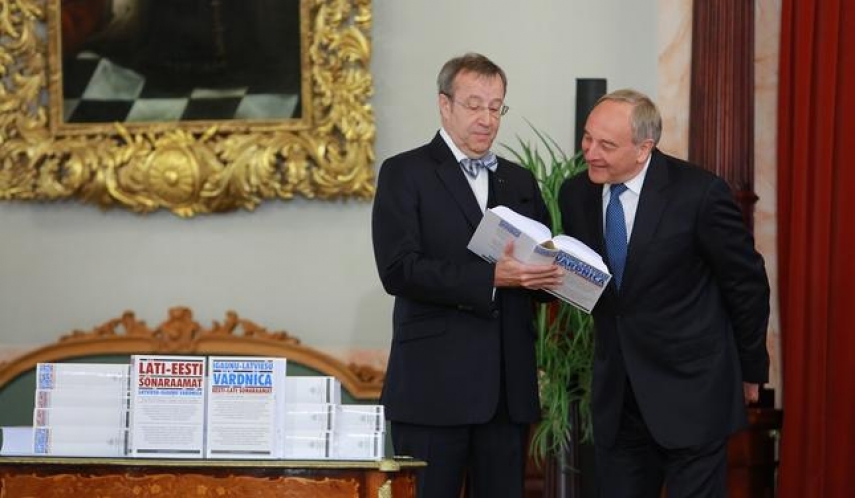 Estonian President Toomas Hendrik Ilves and Latvian President Andris Berzins have acknowledged the years of work by members of the Latvian Language Agency and the Institute of the Estonian Language that has now resulted in the completion of modern Estonian-Latvian and Latvian-Estonian dictionaries, the president's office reports.

"The Livonians did beat us to it and compiled a Livonian-Estonian-Latvian dictionary back in 2012, as we were only making plans," President Ilves said on Monday at the official presentation of the dictionaries in Riga.

The Estonian and Latvian heads of state have been strong supporters and promoters of the new, modern dictionaries.

Within the framework of Estonian-Latvian cross-border co-operation programme, the Latvian Language Agency compiled the Estonian-Latvian Dictionary and the Institute of Estonian Language the Latvian-Estonian Dictionary; both editions include more than 40,000 entries. Apart from hard copies, the Institute of Estonian Language has published electronic versions of both dictionaries; the Latvian Language Agency has also made a full electronic version of its dictionary available online; soon this will be supplemented with mobile applications for the users of the Apple iOS and Android platforms.

The Latvian-Estonian dictionary, which was complied by the Institute of Estonian Language, was based on a bilingual parallel body of text, which was created by means of a third language; this is a unique method for the compilation of a translation dictionary in Estonia. The structure, principles for compilation and automated layout were developed by Project Manager Arvi Tavast, and the translation and technology company Tilde took part in the compilation of the dictionary.

The Estonian-Latvian dictionary, which was complied at the Latvian Language Agency, was put together by Chief Editor Valts Ernstreits and Marika Muzikante and Maima Grinberga; reviews were done by Guntars Godins and Lembit Vaba. This is a substantial and modern dictionary, which includes a good set of examples and grammatical information, and will help users both to translate from Estonian into Latvian and in learning the language. The dictionary includes an abundance of vocabulary that is most commonly used for the purposes of translation; many new Latvian words are published for the first time in this dictionary.

Anyone interested in developing the Estonian-Latvian dictionary further has been encouraged to get involved, as modern technology has made the working version of the dictionary available to all. An updated version of the electronic Estonian-Latvian dictionary is now available online at www.ee-lv.lv, thanks to the Latvian Language Agency. Future plans include continuing improvement of the dictionary to enhance the quality of the translations in both Latvian and Estonian.