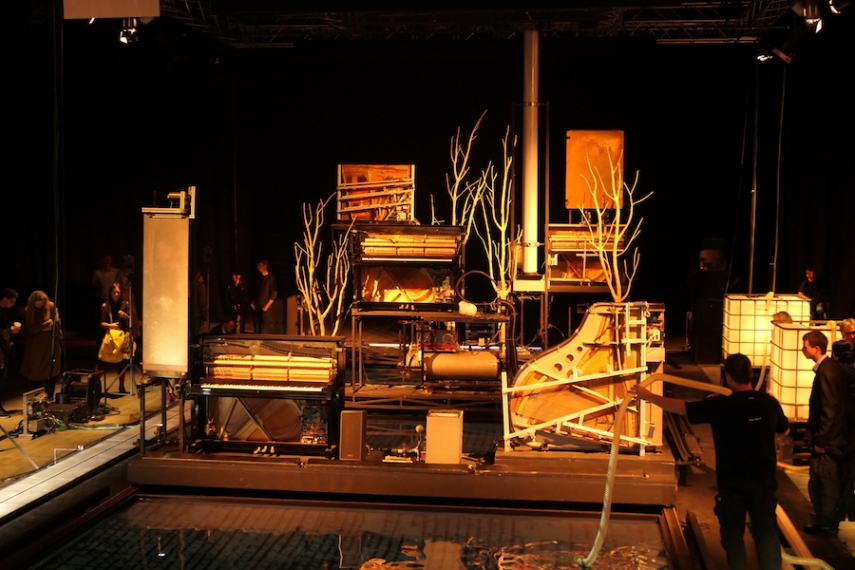 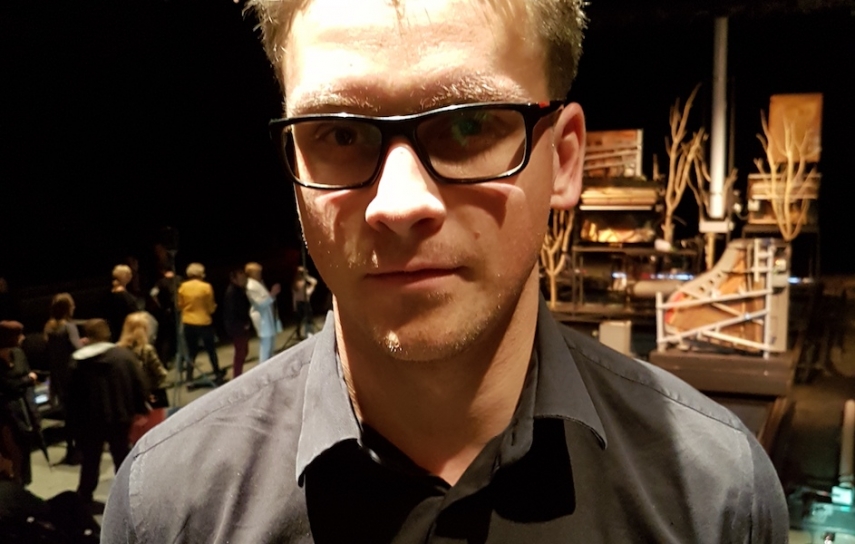 How to attune each dripping of a water droplet shimmering in the rainbow-variety rays to the peculiar musical tune? Note, one without an actor, furthermore: with the pianos playing themselves and the background voice swooshing the viewer through the centuries of human civilization history in an expedient manner?

How to build the stage no one ever has seen before was the daunting task for Klaipeda-based company ProDJ, which was entrusted with the task by the event organiser, Klaipeda’s Svyturys Arena. It was entitled to host Heiner Goebbels’ Stifters Dinge performance in this year’s Lithuanian capital of culture, Klaipeda.

The most unique creation of Heiner Goebbels presented in Svyturys Arena encompassed an array of otherworldly sounding rhythms, tones, noise, voices and texts. The author himself defines his work as a composition for five pianos with no pianists, a play without actors, a performance without artists, a kind of 'no-man show'. It refers to Bach, traditional Greek songs and melodies from New Guinea, and cites the texts of Claude Levi-Strauss, William Burroughs and Malcolm X. The work is inspired by the work of Adalbert Stifter, a 19th-century Austrian writer with a goal of documenting the sounds and visual manifestations of nature.

Most of the 150 viewers who attended the once-in-a-lifetime theatrical experience, including the author of the article, seemingly left the hall unable to comprehend what they had just been taken through.

Although the feeling of the performance’s “incompleteness” was lingering in air after the final accords of the self-playing pianos, some attendees, visibly awe-stricken, were earnestly sharing their emotions, but seemed puzzled at the end.

Isn’t it what Goebbels strived for, i.e. for a theatre falling under no classification, resisting any attempt at definition, any reduction to known and recognized codes? In other words, for a puzzle theatre that still makes the viewer fidgeting with his or her cell phone for the most of the day give a thought to what life is all about?

The live performance that Heiner Goebbels' theatre represents is let’s see and hear the world in another way, sometimes intrigues us, but never leaves us indifferent.

For Dovydas Bajoras, the director of ProDJ, a company specializing in stage lighting and assembling, as well as leasing stage and lighting equipment, the biggest challenge in his words was not the assembling of the quirky-looking lifeless-stage installations, but having them operate precisely as a Rolex watch.

“It was not easy at all to explain to my team what task we were supposed to take on and how to get it done so that the performance’s demanding managers from Switzerland and France were content.  All I received from them was a USB stick with thorough instructions. Although the performance had been shown over 300 times worldwide before its arrival in Klaipeda, we had to take it on from scratch,” he recalled for The Baltic Times.

The staging needed a lot of unusual items, like dry ice.

“We took on the piecing together step by step and, to draw a comparison, we had to work painstakingly as minesweepers. Advancing to what seemed to us successful, we’d be suddenly stopped by the performance supervisors, who’d ask us to dismantle the last round of the assembling and start it all over. Surely, I often had no idea what was wrong. No doubt it was the first experience of this type for our company, and I believe the final product was top notch. The project managers did praise us, too,” Bajoras said.

And Svyturys Arena has proved it can host any performer and performance, even as extra-terrestrial-looking and sounding like Stifters Dinge.