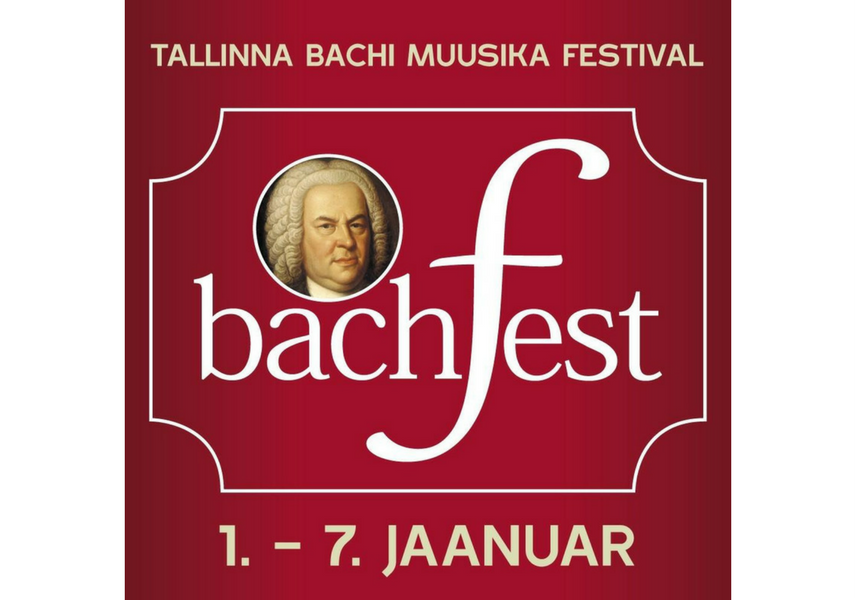 The Tartu Winter Music Festival is a celebration of classical music that offers musical fireworks with beautiful concerts during the first week of the New Year. Between Jan. 1 and 7, 2018, at Tartu’s St. John's Church, you can also hear the concerts of young musicians who are studying abroad and who are at home for the holidays. For more information and tickets, go to www.piletilevi.ee

Tallinn starts the New Year with the marvellous sounds of music by the famous German composer Johann Sebastian Bach. The festival has become a tradition and an original, warm and beautiful New Year’s greeting of Tallinn to all the inhabitants of and visitors to the Estonian capital. In addition to Bach's ingenious compositions, the concerts include many other musical gems. For more information and tickets, go to www.piletilevi.ee

SchoolJazz is a three-day camp and festival for young musicians where they can take part in workshops and discussions, enjoy concerts and finally take to the stage. To find out more, email vivamu11@gmail.com or call (+372) 566 59257.

The Estonian Arnold Schoenberg Society’s Pärnu Contemporary Music Days includes symposiums, concerts, music workshops for performers, exhibitions, performances and recitals. Initiated in 1988, the festival introduces the history of 20th-century Western music, in particular modernism and its aesthetic and philosophical principles, through a series of concerts, performances, presentations and discussions. The event will shape communications in various fields of art, literature, philosophy, theory and practice. For more information, email schoenberg@schoenberg.ee

Until Jan. 14, The Travellers: Voyage and Migration in New Art from Central and Eastern Europe, Kumu Art Museum, Tallinn

An exhibition that looks at travel in a region where freedom to travel was, until recently, a luxury available only to the very few. The revolution of 1989/1991 and the subsequent opening to the world and globalisation processes allowed citizens of the former Eastern bloc personal mobility on an unprecedented scale. The region’s new, post-socialist identity has been dictated by participation in international exchanges as much as by the new political and economic order. The Travellers showcases the enriching value of travel and simultaneously problemises the tensions that inevitably arise between the poetics of the travelling experience and the political situations that condition it. The exhibition presents mobility as the ultimate condition of today just as compulsory immobility was the defining force for the previous generations of Eastern European citizens, thus offering a reflection on the character of contemporary post-socialist identities formed at the intersection between the two. Twenty-four contemporary artists hailing from 15 countries of the former Soviet bloc and former Yugoslavia show how people, goods, and ideas flow between this part of Europe and other regions of the world. They tell the stories of holiday trips as well as distant journeys and migrations. Stories of closed European borders during the divided Cold War era as well as of the capitalist-driven acceleration of the 21st century. For more information about the exhibition, visit www.kumu.ekm.ee

The recurrent theme of the Scottish Paty is introducing Scottish culture to new audiences. Organised in partnership with the British Embassy in Tallinn, the Scottish Club (Šotimaa Sõprade Klubi), the Scottish Culture Society of Estonia and the Whiskey Club, the festival programme includes film screenings, performances of Scottish dancers and bagpipers, as well as concerts, a course on whiskey and an open championship of whiskey connoisseurs. To find out more, email info@kultuurimaja.ee or call (+372) 472 4470.

Launched in Jan. 2010, DocPoint Tallinn, organised in collaboration with the DocPoint Helsinki Documentary Film Festival, has expanded from Finland to Estonia to become a prestigious event throughout Europe. The festival’s programme includes a combination of national and international documentary films made during the last few years. For full information about the festival, visit www.docpoint.ee

Music by G.F. Handel, J.S. Bach and several Latvian composers plus some well known Christmas melodies will be performed by the brass quintet The Sparkling and organ player Ilze Reine. The musicians have created a new concert programme called Music for Him, where, similar to that of the Three Wise Men, the musicians pay homage God by playing music composed in his honour. By combining the sound of organ music with the lustrous tones of brass instruments, the concert will feature the “Hallelujah Chorus” from Handel’s Messiah, Vecumnieks’ “Ave Maria”, “Kyrie Elesison” from Zemitis’ “Mesas” alongside compositions by Kalejs and Bach’s chorale preludes. The concert starts at 4 p.m. and entrance is free.

Would you like to return to the land of your childhood? Then welcome to the Christmas fair on Livu Square! The joyful sound of children’s laughter, small bells of merry-go-rounds, fluffy snowflakes and the scent of spices, roasted nuts and almond will bring back the Christmas miracle from your childhood. Under the light of multi-coloured lanterns, Latvian craftsmen and artists will offer their artwork. Artisan jewellery, Christmas ornaments, woodwork, knitted hats and socks, ceramics, enjoy a romantic stroll and select your Christmas presents at your leisure. If your nose is freezing and your stomach is empty, it’s time for a warm drink and a honey bun! The fair’s Christmas music will put you in a good mood. Children will be treated to various surprises, Santa Claus, Christmas elves, the opportunity to sing songs, recite poems and receive presents, crafts and games! The Christmas fair on Livu Square has been filling the hearts of the locals and the city’s guests with joy for several years. This year, it will experience changes in the form of a new visual setting. Come and have some fun!

During Orthodox Christmas, the Latvian Radio Choir invites everyone to a concert featuring Russian sacral choral music from the 18th century to today. The programme has been put together by the outstanding Russian composer and conductor Sergei Yekimov who will also be conducting the choir and will show the vitality of these musical traditions and the beauty of spiritual music. Tickets are available online at www.bilesuparadize.lv.

The wizardly fingers of Nicholas Angelich conjure Beethoven’s transcendental, fragile fantasy, known as his Piano Concerto No. 4. Andris Poga builds a monumental and lively Prokofiev’s Symphony No. 5 using an architectural, far-reaching approach. The event melts away in a gleaming B flat major jubilation. Find out more and buy tickets at www.bilesuparadize.lv.

Gunars Krollis is one of the most notable masters of Latvian printmaking of the late 20th century whose works first and foremost bring to mind a perfectly refined form of artistic expression dealing with moral-aesthetic subjects that are relevant to society. The exhibition includes Krollis’ popular mid-1960s cycles of linocuts “My Riga” and “Drivers of the Plavinas HEPP” in which the interpretation of the city’s history, inter-generation relationships and the subject of work reach an outstanding level of generalisation and heroism. Meanwhile the triptych etchings “Reflections of Japan” and “Vienna Diary” from the 1970s and 1980s reveal a more poetic and nuanced representation of historical themes and characters. Large-format Indian ink and graphite drawings from recent years will also be on show. Experiences in Central Asia, Japan, Jordan, Syria, and the Lebanon have left a strong impression on the artist, creating a lasting interest and desire to view events of the ancient past in connection with current processes. For more information, see www.lnmm.lv.

With a Stradivarius in his hands, the German violinist Kolja Blacher entrances audiences with his exceptionally refined tonality and meticulously sharp interpretation. For almost 10 years he performed with Claudio Abbado as the first violin of the Berlin Philharmonic and the Lucerne Festival Orchestra. Now at his prime, Blacher enjoys the dual role of soloist and chamber musician. Beethoven and contemporary music is especially dear to both, therefore this rendezvous with Sinfonietta Riga includes an intimate contemplation on life and eternity – “Leaving” by the Russian composer Elena Firsova – as well as the dramatic Violin Concerto and bright, pastoral Symphony No. 6 by the Viennese classic. Programme. Elena Firsova, “Leaving”. Ludwig van Beethoven, Violin Concerto in D major, Op. 61, and Symphony No. 6 in F major, Op. 68 (Pastoral). For more information, see www.latvijaskoncerti.lv. For tickets, go to www.bilesuparadize.lv.

The British violinist Nigel Kennedy will perform in Riga for the first time ever with a concert programme entitled The New Four Seasons featuring music from the album My World, which is dedicated to his teachers. Kennedy isn’t just a musical genius, he’s also a revolutionary with a scandalous reputation within the academic community. He has organised a revolution within the musical word with his rock and roll attitude towards classic pieces and a classic approach towards rock music. His first album, which included interpretations of Antonio Vivaldi’s The Four Seasons, helped the artist rise to become one of the world’s top violinists. Furthermore, this album was also included in the “Guinness Book of Records” as the most sold classical music album of all time. Kennedy’s concerts are not just seen as the benchmark of classical violin music. They’re also full of passion, freedom, intelligence and are performed with precision. Tickets can be bought online at www.bilesuserviss.lv

The exhibition contains artefacts that have become part of the medal collection of the National Museum of Lithuania over the last three years that have been purchased from medallists, collectors and medal distribution companies and that were donated to the museum by public institutions, found during excavations and gifted by medal artists and their family members as well as private individuals. In this exhibition visitors can see a small part of one of the largest donated collections of the recent period, namely 715 medals, plaques and models created by the late Lithuanian artist Stasys Leonas Makaraitis (1938-2014). These works, dedicated to the events and personalities of the history of Lithuania and the architecture of Lithuanian cities, constitute almost a third of the exhibition. The largest part of the collection that became a significant addition to the museum’s medal collection is comprised of portraits of artists, writers, theatre people and other outstanding personalities, distinguished by both compositional and visual solutions. These are mainly portraits of contemporary figures that hardly ever reach museums and that are seldom shown in public. The collection was given to the museum by the artist’s daughter, the journalist and political witer Indre Makaraityte. For more information about the exhibition, see www.lnm.lt.

The Winter Screens festival will be the 13th such event organised by the French Institute in Lithuania. The event, which will take place in 11 cities in Lithuania, will introduce audiences to the engaging, cheeky, light and hard at the same time, extraordinary and unusual world of French cinema. This is a subtle art nurturing an active and intellectual spectator, and at the same time a sensitive and open dreamer in search of new emotions and excitement. For more information, see www.ziemosekranai.lt.