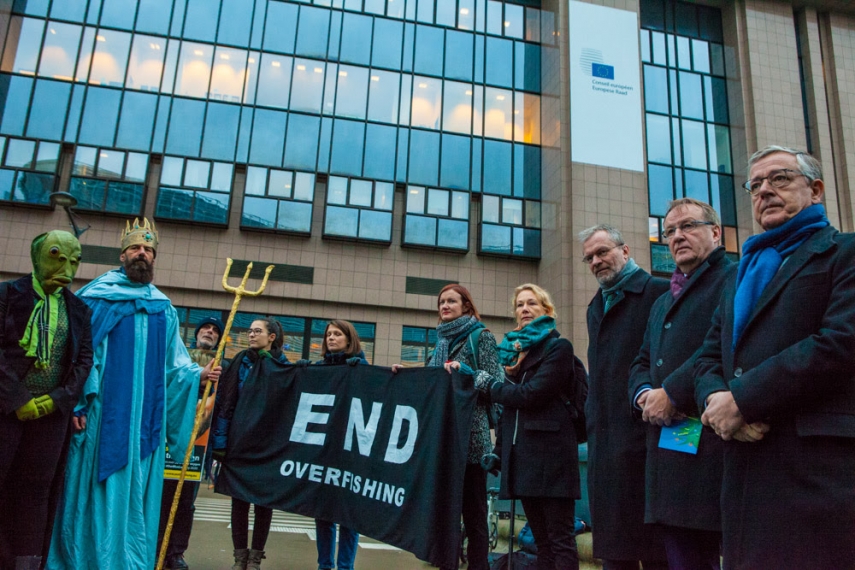 BRUSSELS - Poseidon, the well-known god of the sea, and his Minister for the Ocean, slammed EU fisheries ministers for refusing them access to the Agriculture and Fisheries Council meeting opening yesterday in Brussels.

Poseidon had earlier been introduced to Director General of DG Mare, Mr Aguiar Machado, Austrian Ambassador Thomas Oberreiter and German government fisheries representative Walter Duebner during a formal red carpet ceremony outside the Agrifish meeting venue, the Justus Lipsius building, where 12-year old Tahina Mongodin presented the officials with gifts and the signatures of over 350,000 EU citizens, with the words “this is for our future”.

“The ignominy!”, fumed Poseidon, after arriving with this minister and retinue by rickshaw as Brussels rush-hour traffic roared by the majestic Schuman roundabout. “I have travelled far, from the depths of the Atlantic Ocean, across the North Sea to the shores of Belgium to deliver a stern message on behalf of the oceans and EU citizens - Commissioner, ministers, end your overfishing, now! Yet for all their platitudes, they have refused, me, Poseidon, access to meeting where they discuss my marine kingdom, which provides bounty to EU citizens. Ministers, you made a law five years ago to end overfishing - but we worry that you will continue to ignore the word of scientists, and continue plundering my seas in pursuit of profit.”

“With just one year left until the 2020 deadline to end overfishing, fisheries ministers must pay to the message from more than 350,000 EU citizens and over 30 European and international celebrities: break the annual cycle of setting quotas above scientific advice, and deliver the healthy fish stocks you committed to”, said Rebecca Hubbard, Program Director for Our Fish.

“This year’s meeting is critical, both because it is our last chance before the 2020 deadline to end overfishing, and because the EU ban on wasting unwanted fish (the Landing Obligation), must finally be fully implemented. But concerns about ongoing discarding of overfished and vulnerable species mean that ministers must also address the need for radically increasing monitoring and control, if we are to ensure the limits and rules that are set, are respected and complied with.”

“Ending overfishing is the most practical and achievable thing EU ministers can do to help our oceans under pressure - it will ensure healthier fish stocks, which is the basis of secure incomes, thriving coastal communities, and a flourishing marine environment. There is no good reason to continue delaying action - in fact, in many cases, it is the political delays of the past that have put fish stocks in the difficult situation they are in today. Our oceans, and our current and future generations, deserve better leadership,” concluded Hubbard.

Three petitions collected since October 2017, have collected over 350,000 signatures from EU citizens in support of an end to EU overfishing. Last week, Our Fish asked supporters to write to Commissioner Karmenu Vella and EU fisheries ministers, asking them to end overfishing during the December Council meeting. Over 7,000 emails have already been sent to Commissioner Vella, and fisheries ministers in Denmark, Germany, Netherlands and Portugal.

The reform of the EU Common Fisheries Policy in 2013 included a commitment to end overfishing by 2015, or by 2020 at the latest, however the latest assessment shows that over 55% of North Sea and Atlantic fish stocks are still overfished - experts have said that at this rate, the EU will not meet the 2020 deadline. The introduction of the ban on discarding fish at sea, or throwing unwanted fish back (called the landing obligation), is also being dienied by industry interests, who for the most part have refused to change their discarding behaviour.