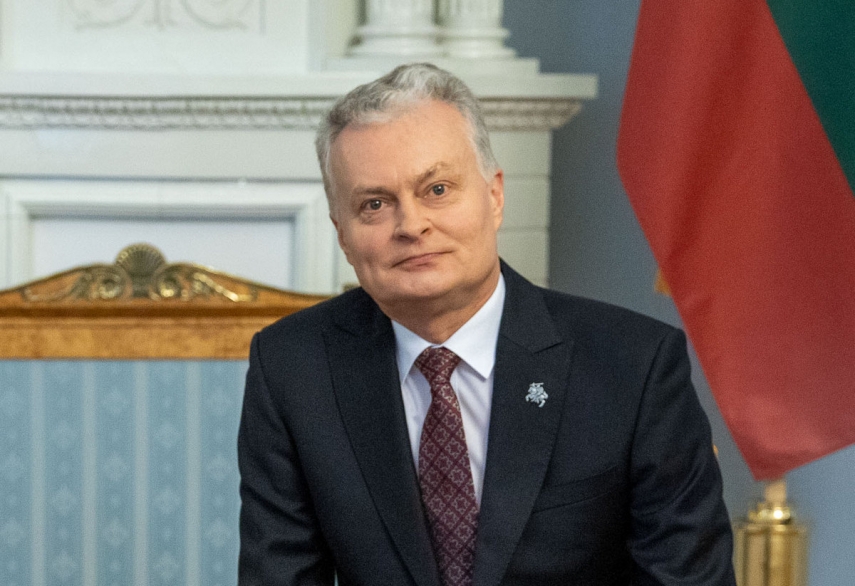 VILNIUS – "Very serious sanctions" will be discussed at the EU level if Minsk fails to release Belarusian opposition activist and blogger Raman Pratasevich who was arrested at Minsk Airport on Sunday, Lithuanian President Gitanas Nauseda said.

Nauseda said other measures could be taken against the Minsk regime, too.

"[These] include declaring Belarusian airspace an unsafe area for civil aviation, meaning, among other things, that Belavia planes would lose the right to land at EU and NATO airports," he told a news conference on Sunday evening.

The International Civil Aviation Organization must conduct a thorough investigation to "answer the question of how an act of state terrorism could have occurred in broad daylight", according to Nauseda.

The president said he would raise these issues at the European Council's meeting.

"Many EU states have now seen the true face of this regime and what threat it is posing not only to Belarusian civil society, not only to the opposition, but also to people who have nothing to do with events in Belarus," he said.

Pavel Latushka, Belarus' former culture minister and a member of the Belarusian opposition's Coordination Council, says he has information that Belarus' authorities threatened to use weapons to force the Ryanair crew to land in Minsk.

Nauseda said he had no such information, but noted that military aircraft had been scrambled.

"The safety of the flight was endangered," the president said. "The aircraft had to change course, even though it was almost in Lithuanian airspace at that time. The plane was about to land in our capital, Vilnius."

"The aircraft had to alter its flight plan, an exceptional occurrence that is absolutely incompatible with safe civil aviation," he added.

Lithuanian Foreign Minister Gabrielius Landsbergis called the forced landing of the flight” a state-initiated terrorist act against the international community."

When asked if Minsk had given any official explanation about the situation, Landsbergis said that most of the information about what was happening had come from the aircraft’s passengers.

"We kept in touch with the passengers all day," he said. "We thank them for the information they provided and for their courage."

The minister said he had asked the Prosecutor General's Office to launch an investigation "into potential aircraft hijacking by Belarus' regime".

"The investigation would answer many questions. Today we have only by a part of it," he said.

Landsbergis noted that the Lithuanian authorities' main task on Sunday was to ensure the safe return of the flight's passengers to Vilnius.

He said there would be a "strict response" to Belarus' interception of the flight.

Ryanair's Athens-to-Vilnius flight that had been diverted to Minsk and held for several hours there landed in the Lithuanian capital's airport on Sunday evening.

The flight, scheduled to arrive in Vilnius at 1 p.m. on Sunday, changed course just before crossing into Lithuanian airspace.

Ryanair said the flight made an emergency landing in Minsk after being notified by Belarus' air traffic controllers of "a potential security threat on board".

"Nothing untoward was found and authorities cleared the aircraft to depart together with passengers and crew after approximately five hours on the ground in Minsk," it said.

Belarus' opposition say that the flight was forced to land in Minsk to arrest one of its passengers, opposition activist and journalist Raman Pratasevich.

Lithuanian and Western leaders have demanded his immediate release.