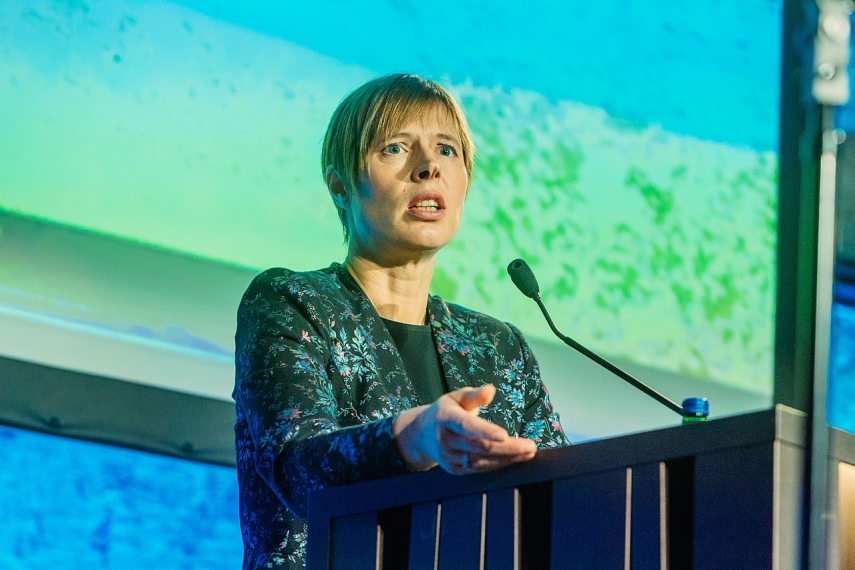 TALLINN - Estonian President Kersti Kaljulaid in her keynote address at the World Energy Congress in Abu Dhabi on Tuesday discussed the need to create favorable conditions and legal prerequisites for green energy technologies all over the world.

Kaljulaid said that the old adage -- first ones gain, last ones pay -- still holds true when it comes to going green.

"The payday will not come quickly enough for us to directly benefit, but our children will," the president said.

Kaljulaid cited examples of forces and existing technology currently in favor of green energy adaption and concluded that what is keeping us globally from going green is the same factor involved in development aid distribution.

"Transaction costs of getting such a global agreement, implementing and controlling the results in a clear feedback loop cannot be done unless we find the market forces to do so. All states who have escaped poverty and reached the ranks of developed nations -- including Estonia in the last 30 years -- have demonstrated that it can only happen if you align your societal needs, in this case going green, with the interests of the market," she said.

The president said that the European Union is getting ready to declare the need for climate neutrality by 2050, already with the objective of 80 percent carbon neutrality.

"It is the world's biggest and richest single market, and it has a political class that understands that these objectives can only be achieved if we skew market forces and force the market to adapt to our demand of no carbon dioxide emissions. This will be torturous for current energy producers and distributors, but this torture is absolutely necessary," Kaljulaid added.

"Hence the only thing what helps us is exactly what the EU does -- we skew the markets, by administrative capacity, because we have the general support of our people to do so -- to adjust to carbon free future. Yes, our societies -- yours and mine -- will bear the cost of the transformation. But in the end, technologies become cheaper and other markets will apply them for purely market reason, if green is making more economic sense than dirty energy," she said.

The president noted that it will make more economic sense to apply all green technologies globally, and if this were to happen, everyone might become users of carbon dioxide free energy users a critical five, 10 or 20 years faster.

„The planet will still heat somewhat more, the water levels will keep rising somewhat, but it might be tolerable. We, humankind, would never know ourselves how close to the brink we came, but so be it. I prefer the market forces pushed by smart policy-making and legal space-setting act quickly and save us all from knowing the alternative," the president said.

Staged every three years, the World Energy Congress provides a platform for energy leaders and experts in all aspects of the sector with representatives of over 150 states present at the event. The Estonian president is one of the key speakers at the congress while Estonian businesses Datel, Enefit, Laava Tech, Nortal and Roofit Solar Energy are also represented in the event's exhibition grounds totaling 40,000 square meters.