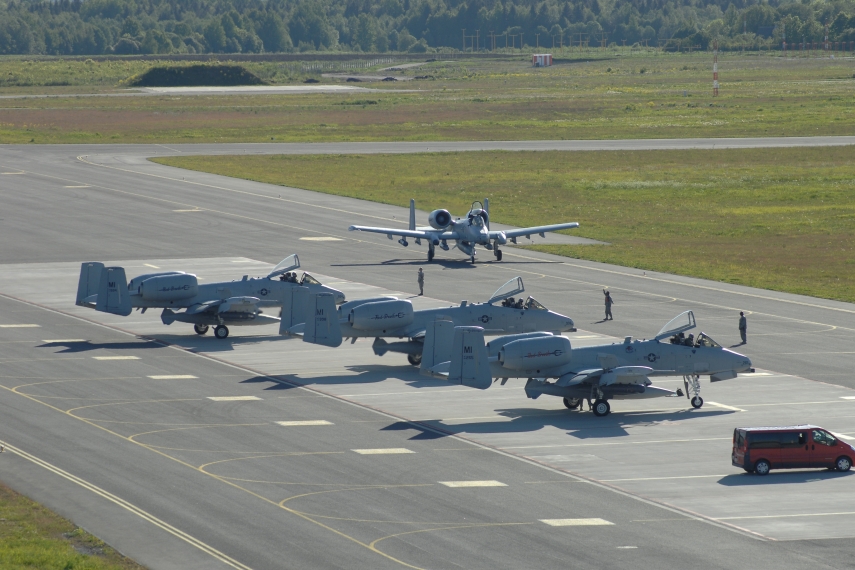 Amari air base in northern Estonia, where the US Air Force will be hosted [Image: Creative Commons]

The biggest ever joint exercise of the Estonian and United States Air Forces will begin in Estonian airspace on Friday and will last for nearly a month. Initially the U.S. fighter planes were intended to reach Estonia on Thursday, but their arrival was postponed by a day, Postimees Online reports.

Estonian Air Force Chief, Colonel Jaak Tarien said, on Kuku radio station, that 14 F16 fighter planes will arrive at Ämari Air Base from their home base in Aviano, Italy. "They come here to get their combat readiness qualifications. They very much like the training conditions offered to them by Estonian airspace. For the first time, the Defence Forces central training field will be used for dropping bombs at land targets; a lot of air combat exercises will also take place. Besides attending the exercise, the planes will have practice sessions with the Swedes and Finns. This gives a lot of added value, "said Colonel Tarien.

He said that initially the planes were scheduled to reach Ämari today but due to logistical reasons will arrive tomorrow.

Tarien said that Ämari has hosted more fighter planes at one time but has never had such a big unit practising joint exercises there.

The training exercises will focus on cooperation between Estonian and U.S. Air Forces. In addition to a large number of scheduled low-altitude flights over the Estonian Defence Forces central training grounds area in Northern Estonia, for the first time since Estonia regained independence, land targets will be fired at using on-board weapons and battle ammunition at the Defence Forces' central training ground. This will take place on 24 and 25 March.

"The upcoming exercise is the first step of implementing the promise given by allies. The US defence budget for fiscal years 2015-2016 is planned to allocate 24.7 million dollars for the expansion of Ämari air base's infrastructure, and this is a clear sign that our allies, the United States, have included a presence in Estonia in their long-term plans, and similar exercises will start taking place here on a regular basis," said Estonian Air Force Chief, Colonel Jaak Tarien.

The United States Air Force's 510th fighter plane squadron will participate in the exercises; it is based on a permanent basis in the Aviano Air Base in Italy. For the exercise period, the squadron, supplied with F-16 fighters, will relocate temporarily to the Ämari base.

Along with the fighter planes, nearly 300 US Air Force members will arrive in Estonia.