Estonia should remain among those states to talk to Russia themselves 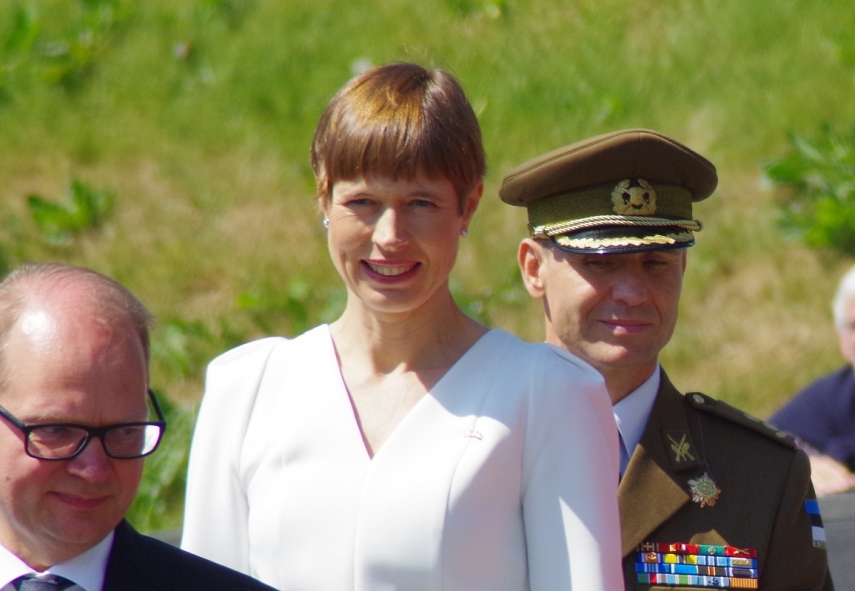 TALLINN - Estonia should remain among those countries to talk to Russia themselves and one whose opinion on issues relating to Russia other countries ask for, Estonian President Kersti Kaljulaid told the Valisilm foreign affairs program of ETV public television on Monday evening.

The head of state was asked how she feels about French President Emmanuel Macron's idea to start making up with Russia in a situation where Crimea is still annexed and the war in eastern Ukraine essentially still ongoing.

"I am continuing this line of telling all partners and allies that we cannot go along with this game -- even if we ourselves want to show so-called success, show a result --, that the Russians are doing two percent and we will then do 20, because we so enjoy pretending that, see, there is progress and there is reason to go back to the usual relations," Kaljulaid told the foreign affairs program.

"Here, we must take into account the entirety of that chain -- Georgia, Ukraine. And if we were to now give the Russians reason to calculate that after Georgia, there were three months, before the war in Ukraine already several years that there were renewed talks with Russia also about planning visa freedom, then it cannot be that five years now passed since Ukraine and then we will see what there will be next time. With this, we are giving the Russians a very clear signal. This must continue to be said," the president said.

According to Kaljulaid, it is more important for Estonia to remain among those countries to talk to Russia themselves and with whom other allies and partners discuss what to do now with the Russians or Russia, how we will move forward.

"If we were to be the country that does not communicate itself at all, we will be left in this role regarding which it is said that you do not know, you do not understand, you are leaving us the hard work of communicating with the Russians," she said.

The president said she believes she senses that having made a contribution herself to understand what is going on and what is being thought in Russia, adding that she has better access to this information and a significantly stronger position to present the country's stances, be it to the French or whoever.

When asked whether Estonia along with other Baltic countries and Poland is not threatened by being left in isolation with their concern about Russia in the European Union, Kaljulaid said that "if you have the Baltic countries, Poland and the Nordic states, this is definitely not isolation."

"Yes, we know, the approach of the Finns is tactically very different, but our risk analysis on what kind of a threat Russia is as well as what kind of a threat is a Russia that perceives the closing of its own window of opportunity because of lack of economic power, bad demography, the much faster development of other regions of the world, how dangerous this kind of a neighbor can be -- in this sense, the opinion of the Swedes, Danes, Finns, Estonians, other Baltic countries or Poles does not differ in any way. So, we are not actually alone, after all," Kaljulaid said.