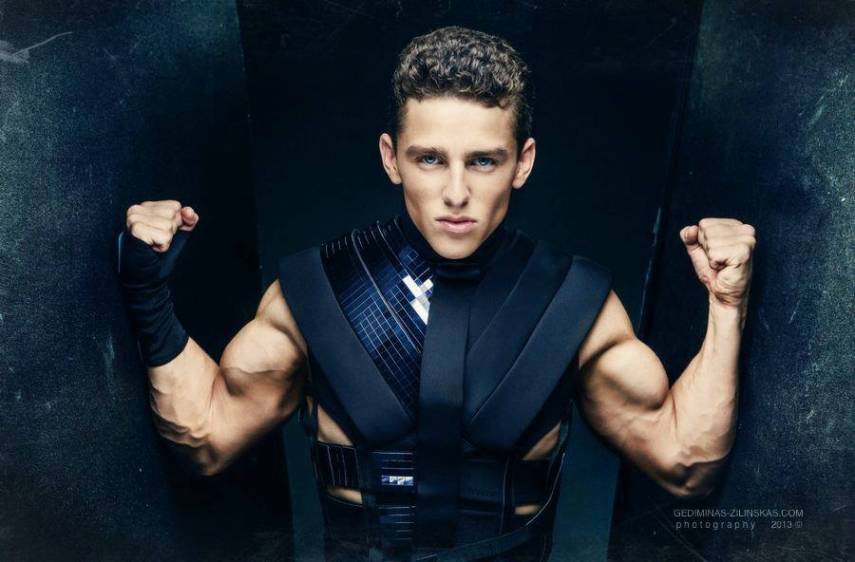 Lithuania has been waiting for this night ... could Donny Montell win the Eurovision Song Contest?

STOCKHOLM - As the end of the selection process for the artist and song to represent Lithuania in this year’s Eurovision Song Contest approaches, there is speculation as to who will be chosen to perform in the final. If LTV really wants to be successful in this big international music contest the organisers need to understand that there is only one artist right now who can give Lithuania a high placing and that is 28-year-old Donny Montell.

I must honestly say that after 12 years’ experience in the Lithuanian music business preceded by 30 years experience in the USA, Scandinavia, Ireland, and the UK, I believe that Donny Montell is the first Lithuanian artist who is capable of winning the Eurovision Song Contest. He has a unique voice with almost perfect English pronunciation. He is at this time the Baltic States’ most dynamic young entertainer, both from a visual and audio perspective and he has total disciplinary control of his stage performances — all of these are the necessary requirements for success in Eurovision. But I am sad to say, Montell is the only artist in the Lithuanian Eurovision contest who has these qualities. And this year he has what appears to be the right song, “I’ve been waiting for this night,” written especially for him by top professional Swedish songwriters Jonas Thander and Beatrice Robertsson. With a strong professional team led by his experienced Manager Martynas Tyla, Montell is dressed for success but the question is: will the the jury members and televoters understand this, and if they don’t understand it will the experienced Jury chairman, Ramunas Zilnys, try to convince them?

Many artists have performed in this year’s contest. Some of them were quite good but most of them, at least from an international perspective, were below the required standard to represent Lithuania in the international final. I really don’t mean to hurt anyone’s feelings, but the truth is that most of the really good artists in Lithuania seem to avoid Eurovision, and so the contest is infested with less professional artists, many of whom are uncoordinated and musically undisciplined.

They lack stage presence and many of them sing falsely and off key. Most of them don’t have professionally experienced producers or managers, and in trying to manage their own careers with very limited knowledge of how to do so, they often end up making catastrophic decisions. Some of these catastrophic decisions include choosing bad songs and not having the resources to organise suitable choreography. Far too many Lithuanian singers concentrate on their clothes and hairstyles instead of their voices and performances! One of this year’s artists, Aiste Pilvelyte, is a good example of this. She came on stage with a strange red wig which she threw off in the middle of the song. This together with the vampire-inspired mascara running from her eyes was a somewhat uninteresting item that destroyed her whole performance.

The real problem here is that Pilvelyte’s voice is quite good and her song is good, but she doesn’t really seem to understand that by fooling around like a clown onstage, she took the viewers’ attention away from her song and her voice. If Pilvelyte had a professional manager, he would definitely have not allowed her to do all these strange things onstage. Most Lithuanian artists don’t want to give away some percentage of their earnings to a manager and try to do everything themselves, but the result is often negative for their artistic careers. There are many good Lithuanian producers; the following are just a few noteworthy names: Martynas Tyla, Mindaugas and Gintares Bendzius, Mykolas Markauskas, Anatolijus Chudoba, and Deyvidas Zvonkus. All of these, and several others, have a lot of experience in the music business and if the artists made themselves available to them, then the whole standard of the Eurovision Song Contest could be raised considerably.

The Eurovision Contest is primarily a song contest and this year there are really only two songs in the selection process that could seriously represent Lithuania. One is Ruta Sciogolevaite’s ”United,” and the other is Donny Montell’s “I’ve been waiting for this night.” However, if the final result is to be between these two, then it should be Donny Montell who represents Lithuania. Sciogolevaite has a very good song that is spoilt by her somewhat weak stage performance, which is truly below the standard needed to win Eurovision. The song itself has a very catchy melody and singalong lyrics which, if performed correctly, could get a very high result in the Eurovision contest, but compared with Montell’s song and performance, Sciogolevaite really doesn’t have much chance of winning. Besides, ”United” is a song that needs to be performed by a group of people in close formation, like ABBA did many years ago with their song “I have a dream.”

Sciogolevaite is singing the song with an almost ego-tripped focus on herself and in some parts of the performance it is noticeable that she wants all the attention and that she doesn’t really care about the singers dancing around her. For this type of song, the singer and her dancers and/or background vocal singers need to perform the lyrics in a collective form. The whole choreographic structure of Sciogolevaite’s performance shows that she has been away from the artistic spotlight for some time or that she doesn’t have a professional manager giving her advice.

Although I live in Stockholm, I understand the Lithuanian language and I keep myself very well informed about what is happening in Vilnius. The latest rumour I have seen appearing on the internet is that many Lithuanians are expressing doubts about sending Montell to the final, because “he has already won the contest once before” (2012 with the song “Love is blind”). This is proof that some of the jury members are not being objective. Perhaps they need to be reminded of how many artists in the past have represented their countries more than once. A few of these are Johnny Logan, who won the Eurovision Song Contest twice, in 1980 and 1987, for Ireland. Or Carola Haggkvist, who won the international Eurovision contest in 1991 and altogether represented Sweden three times. Or Charlotte (Nilsson) Perelli who won the international Eurovision for Sweden in 1999 and won the Swedish domestic finals in 2008.

Those who think that it’s time to send someone else, instead of Montell, because he has had his chance in 2012, are engaged in very negative thinking, because the main objective in choosing a song and artist to represent Lithuania in the Eurovision Song Contest is to send whoever is the best ... and the best should not be set aside just because the artist has previously performed in the contest! It’s almost like saying, “We can’t send Sabonis to the basketball finals because he has already played a previous final!”

In order to choose the best songs and artists, LRT (Lithuanian National Television) needs to pick the right people to sit in the jury. For example, I don’t really understand why Nomeda Kazlauskaite is in the jury. From her comments, it is easy to suspect that she doesn’t know very much about the pop music of 2016 and almost nothing about Eurovision. A Eurovision jury should consist of people who understand today’s popular music. The jury should consist of people similar to the jury’s chairman Zilnys, who has many years of experience and who is almost like a walking encyclopaedia about international music. Another suitable person is Darius Uzkuraites, who has several years of experience of playing pop music on the Lithuanian radio. Opera singers and dramaturgic producers, acting teachers and stylists, and the like don’t understand the popular music of Eurovision culture and it is sometimes almost funny to hear them making their judgements. As long as LRT continues to have such people on a Eurovision jury, they will always risk jeopardising their successes in the contest, because they will also risk choosing the wrong songs to represent Lithuania. This has happened so many times in the past and it is time LRT learned something from its previous mistakes.

Another thing that really drops the quality of the Lithuanian Eurovision programme is the foreign jury system. By “foreign jury,” I mean those who give points to the artists from other countries by Skype. These are almost a joke and should be replaced by bringing in key knowledgeable personalities from other countries. For example, the head of the Swedish Eurovision delegation, Christer Bjorkman, is an ex-singer who has himself once won the Swedish Eurovision finals. He would be a perfect foreign jury member and I am sure that Swedish Television would help by joining a link to Vilnius. There are such people in almost every Eurovision country, and they are more knowledgeable than some of the strange and almost funny people who I have seen sending votes to Vilnius by Skype. One of these was a man from the USA last Saturday. It was very obvious that he didn’t understand much about European music. And it seems that LTV producers don’t know that American pop music is very different from European pop music, and it is not such a good idea to allow an American, even if he is a musician, to judge songs for a big European contest.

In conclusion I wish to say that I am quite sure that if the Lithuanian people are smart enough to send Donny Montell to Stockholm in May, he will gain a very high position in the international Eurovision contest. I can’t say that he will win because I haven’t heard the other songs, but he is definitely the best from Lithuania. If, however, LTV sends someone else, they will end up, as usual, in the lower section of the final results and Lithuania will be forgotten the day after the Eurovision final. Eurovision should be taken more seriously; one thing that must be remembered is that a victory in the international Eurovision Song Contest would bring over a thousand journalists to Vilnius. Lithuania and its trade and culture would be focused upon and the country would be spotlighted all over the world, thereby increasing Lithuanian exports and highlighting the country’s achievements in basketball ... and perhaps also showing the world that Dalia Grybauskaite is perhaps the best president in the European Union and that Svyturis, the best beer in the world, is brewed in Klaipeda!

Editor’s note: William Butt works in the music industry in Sweden. He writes regularly about Eurovision.