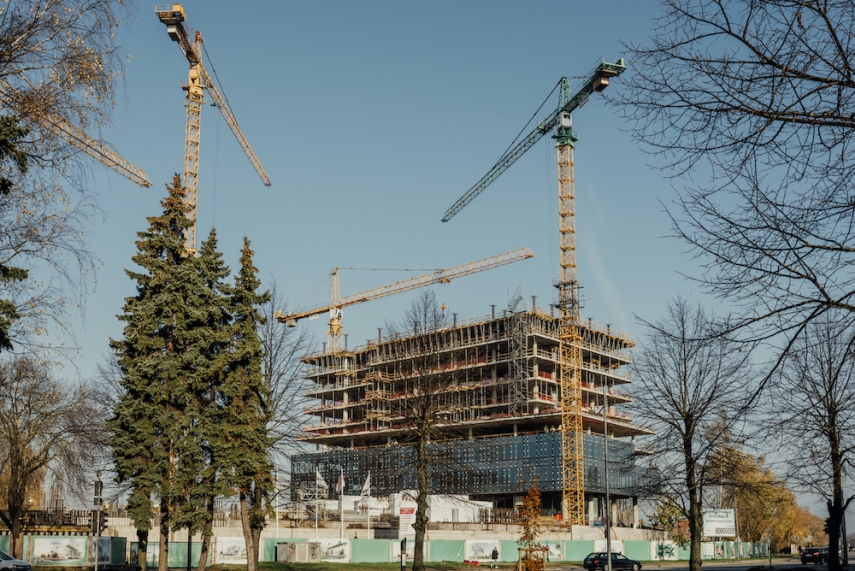 Capitalica Baltic Real Estate Fund I, which is managed by the SBA Group's investment management company Capitalica Asset Management, has successfully completed its placement of a public bond issue launched in 2020. During October, an additional 5 million euros' worth of bonds issue was placed at a yield of 5.5%, bringing the total value of the issue to 8 million euros. In total, VERDE, the greenest offices in Riga, has already raised 13 million euros through bonds and after commissioning will be one of the largest office complexes in Riga.

"The strategy to be the first on the capital market to offer the opportunity to invest in bonds tied to business centres has proven amply justified. Massive investor interest and the successful distribution of bonds is testament to trust in office complex VERDE, the greenest, new Class A office centre project in Riga. The project's clearly visible progress also drives investor demand for these securities. Nine out of ten floors of the first building have already been completed, and negotiations with a significant number of upcoming tenants have reached their final stage," says developer of VERDE, Capitalica Asset Management CEO Andrius Barštys.

Capitalica Asset Management fund will direct the funds obtained through bonds to finance the currently under development green concept office complex VERDE, located in Riga's most advanced business district – Skanste. The halfway completed class A business centre, including underground parking, will span a combined floorspace of 45 thousand m 2 and is expected to draw around 65 million euros in investment. This will be one of the largest office complexes in the Latvian capital.

The bonds dedicated to VERDE were of interest to both individual and professional institutional investors. The success of the distribution also encouraged other participants in the market to follow suit. This opens new opportunities for investors, increases developers' financing diversification, and concurrently contributes to the development of the Lithuanian capital market. The second stage of the Capitalica Baltic Real Estate Fund I bond issue was organized by AB Šiaulių Bankas.

"The vast interests in this issue proved that investors are attracted by exclusive business centre projects, which generate stable returns, and which are implemented by reliable, openly communicating developers who maintain a clear vision. The demand for real estate developers’ securities is further boosted by high inflation because funds that are not invested tend to lose value. Bonds offer possibilities to retain and grow one's capital," says AB Šiaulių Bankas Markets & Treasury Department director Tomas Varenbergas.

A EUR 22 million loan from the European Investment Bank was obtained for construction of VERDE office complex, which approved financing from the investment programme to fight climate change, as this business centre is expected to be a nearly zero energy building.

Capitalica Asset Management's fund signed a 49 million euro general contracting agreement last October with the contracting competition's winner – the Latvian construction company Velve. The first stage of construction work is expected to be completed in June 2022, while the complex should be fully completed in 2023.

Capitalica Asset Management, an SBA Group company engaged in managing commercial real estate in the Baltic States, manages Capitalica Baltic Real Estate Fund I. The fund owns the business centre 135 in Vilnius, the business centre Kauno Dokas in Kaunas and the shopping centre Luizė in Klaipėda. The controlling stake (70%) in Capitalica Asset Management, which was acquired in 2016, is held by SBA, one of the largest Lithuanian capital business groups, and another 30% is owned by A. Barštys's company Fox Holdings.

About “VERDE”
“VERDE” will be the greenest A-class office complex at the Skanstes Quarter in Riga, the place opposite the Latvian Fire Fighting Museum, where Skanstes Streets intersects with Hanza Street, and the only A-class office complex the first stage of which will be opened in the first half of 2022. The “VERDE” office complex comprises two office buildings with a total leasable area of 30000m 2 . “VERDE” has been developed in line with BREAM Excellent and the nZEB (nearly Zero Energy Building) standards. “VERDE” has been named second most-sustainable project in the competition “Sustainability in Architecture, Construction and Design 2020”.

The “green thinking” of “VERDE” is embodied in the sustainable and modern architectural solution by award-winning Latvian architects Andris Kronbergs and Jānis Zvejnieks (Arhis Architects) and brought to life by A-class energy efficiency and smart building management solutions. Superb greenery on the 600 m 2 terraces with trees and other plants on each building, as well as a green backyard with outdoor workspaces will be the special distinct feature of “VERDE”. According to the latest studies, scientists have proved that relaxing terraces, greenery, cutting-edge ventilation systems, smart lighting and layout of rooms, various amenities and other A-class services improve wellbeing and productivity.