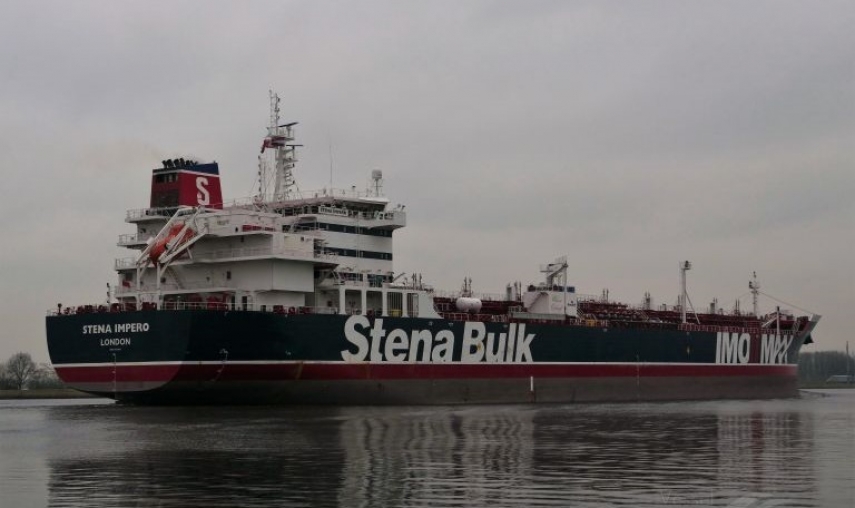 LONDON - Britain on Saturday urged Iran to de-escalate tensions in the Gulf by releasing a UK-flagged ship it said had been illegally seized in Omani waters in an "utterly unacceptable" gambit.

Tehran was defiantly ignoring mounting European appeals to free the captured oil tanker and its mostly Indian crew, but one which also includes a Latvian national.

Iran's Islamic Revolutionary Guard Corps (IRGC) said it seized the Stena Impero ship on Friday for breaking "international maritime rules" in the Strait of Hormuz, a Gulf choke point for about a third of the world's sea-borne oil.

The oil tanker was impounded off Bandar Abbas port for allegedly failing to respond to distress calls and turning off its transponder after colliding with a fishing vessel, Iranian authorities said.

It came hours after a court in the British overseas territory of Gibraltar said it would extend by 30 days the detention of the Grace 1 Iranian tanker seized by British authorities in the Mediterranean two weeks ago on allegations of breaching EU sanctions against Syria.

"They see this as a tit-for-tat situation," British Foreign Secretary Jeremy Hunt said following talks with his Iranian counterpart Mohammad Javad Zarif and a meeting of the UK's emergency response committee. "Nothing could be further from the truth."

Hunt said that while the Grace 1 had been detained legally, "the Stena Impero was seized in Omani waters in clear contravention of international law. It was then forced to sail into Iran. This is totally and utterly unacceptable."

Germany and France urged Iran to release the tanker, whose seizure Berlin called a "dangerous further aggravation of an already tense situation".

US President Donald Trump said Friday's incident "only goes to show what I'm saying about Iran: trouble. Nothing but trouble."

"It is IRAN that guarantees the security of the Persian Gulf & the Strait of Hormuz. UK must cease being an accessory to #EconomicTerrorism of the US," he tweeted.

Later on Saturday, NATO's spokesman joined calls condemning Iran's move, saying it was a "clear challenge to international freedom of navigation". It said all NATO allies were concerned by "Iran's destabilising activities".

Owned by Swedish operator Stena Bulk, the tanker's crew of 23 consists of 18 Indians, three Russians, a Latvian and a Filipino.

New Delhi, Manila and Riga said they were in touch with Tehran to seek the release of their nationals.

Stena Bulk said its insurers had been in contact with the head of marine affairs at Bandar Abbas, who reported that the crew were in "good health".

A formal request is being prepared for a visit to the crew.