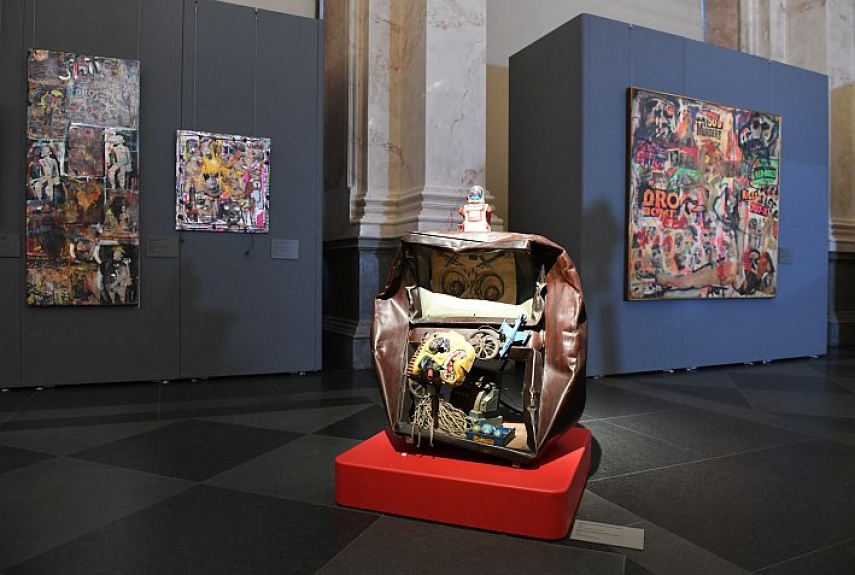 “NO! NO! NO! to the conventional, to all the evil and despair that reign here, NO to conformism and materialism!” This sentence is published in the flyer of Boris Lurie (1924–2008) exhibition in The Gallery: Gertrude Stein in New York in 1963 and it depicts the exhibition dedicated to the NO!art movement that started in the late 1950s and early 60s as opposition to the trend of the commercialization of art.

During the period 1959–1964, NO!art became an important impetus for artists who would later become famous, such as Allan Kaprow (1927–2006), Yayoi Kusama (1929), Jean-Jacques Lebel (1936), Michelle Stuart (1938), Erro (1932), Wolf Vostell (1932–1998), and others. One of the initiators and founders of the movement is a former resident of Riga, Boris Lurie, who, together with Sam Goodman (1919–1967) and Stanley Fisher (1926–1980), held politically and socially intense exhibitions in their March gallery in New York. In 1963, when Boris Lurie meets an art collector and gallerist Gertrude Stein, she founds her gallery and continues working with NO!art artists for a while. Even the names of exhibitions are like the manifestos that “shout for everyone to hear” and demand to be involved: Vulgar Show, Involvement Show, Doom Show, NO! Show, NO! Sculpture (Shit) Show.

From January 12 to  March 10, Riga will have an opportunity to see a part of the previously mentioned shows in the exhibition Boris Lurie and NO!art hosted at the Art Museum RIGA BOURSE thanks to the Boris Lurie Art Foundation in New York, whose staff preserve, research, and promote the heritage of this unique artistic phenomenon. Boris Lurie and Gertrude Stein built lifelong relationship; she has been the founder and president of the Boris Lurie Art Foundation since 2008. And the question Boris Lurie asked in the context of Involvement Show held in 1961, “New borders..., old borders. Is it true that the whole world can be awakened by a single person?” is the fundamental question of this exhibition in 2019.

The works of the NO!art American artists encourage one to look at some of the principled free thinkers in the Baltic region at that time, who were under the opposing political system in the former Soviet sector. In museum’s Bosse Hall you will see the artistic experiments of the local non-conformists who were consistent with the spirit of the times and conformed to what was going on in the rest of the world. These quite differing artists – Latvian Visvaldis Ziediņš, Lithuanian Vincas Kisarauskas and Estonian Andres Tolts – were unified by a convincing override of the ideological conjuncture at the time and serving their own ideals in art, as opposed to pussyfooting before the mundane Soviet administration.

Please note that the exhibited artworks may contain mature, graphic and sensitive content.