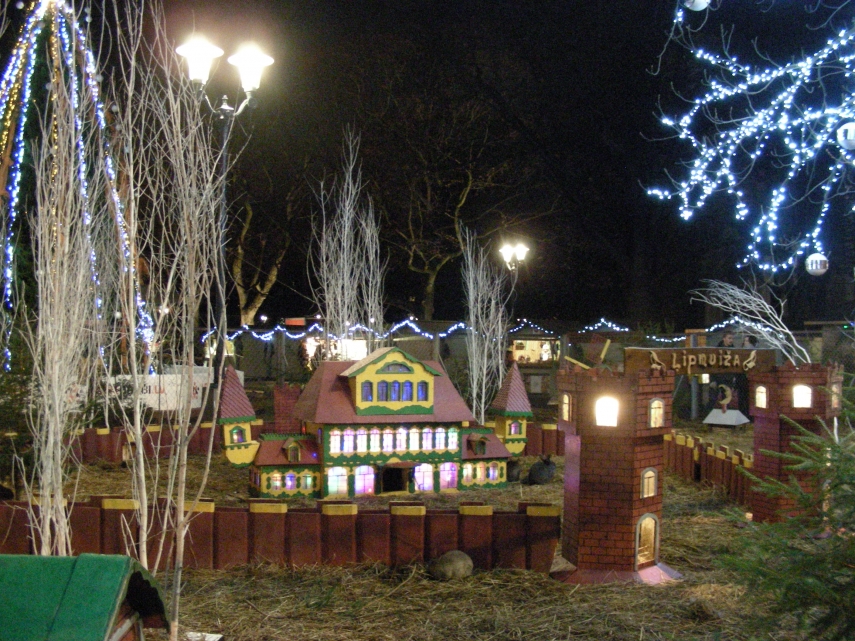 Quaint model cottages on display at this year's Christmas market in Riga.

Let’s imagine a discerning tourist visited the Christmas markets in Vilnius, Riga, and Tallinn this time last year, and now returns to them all again this year. (Let’s not imagine which one they preferred, or which city they believed had started the worldwide tradition of the Christmas tree.)

Enchanted by the snow, the lights, and the quaint wooden cabins, let’s imagine the discerning tourist strikes up a friendly conversation with a local vendor in each market last year — and then, by remarkable coincidence, meets each vendor again for a similar conversation this year. Let’s stretch belief further: assume the conversation in all instances, after a few servings of sausage and sauerkraut, turns to politics.

What would have changed between this year and the last?

Judging by day to day news, we could almost assume 2015 has been a year unlike all other years, a year of extraordinary change and tension and struggle. The best of times and the worst of times, as a writer once wrote.

Well, not quite. Of course, there have been some changes, as in any year, but I would say these changes have been more psychological than anything else, and subject to the usual exaggerations to be expected from self-serving politicians and the attention seeking demands of the 24-hour news cycle.

Take Lithuania joining the euro zone on Jan. 1. If the tourist this year had brought back to Vilnius their spare Litas — Lithuania’s second national currency since winning its independence from the Soviet Union — they would be of no use except as Christmas gifts or niche collector items. This seems like a vast change. But it is actually just another steady step of the Baltics heading in their long-established westward direction. “Historic” and “symbolic” the politicians may have declared then (and it is certainly a landmark to note, as it brings all three Baltic States into the euro zone) but the actual cost of the imagined tourist’s gingerbread is pretty much the same. Fears of price increases proved overblown. Fears about Greece potentially capsizing the whole single currency just a few months after, though understandable, were also unfounded — at least this year.

The solution to the Greek debt crisis may have been the monetary and fiscal equivalent of fixing a broken car with string and Sellotape. But ultimately the euro continues on, and there is too much political capital invested for the EU to let it sink. So Lithuania is still right to have taken it on, though it is easy to exaggerate the importance of the Jan 1 transition, considering the Lita had long been pegged to the euro, and the country had been making preparations to join for years.

Another continuity: political relations with Russia are at a similarly low ebb to where they were in 2014. There have been a few nuances since that point: Russia and Estonia are much closer to at last finalising the border between the two countries. The captured counter-intelligence agent Eston Kohver was freed and “spy swapped” back to Estonia, defusing tensions somewhat.

Energy politics has caused still more frostiness between the Baltics and Russia, and amplified by major developments. While Lithuania’s floating LNG terminal in Klaipeda was already opened by the end of 2014, there were marked achievements in 2015 with the completion of the Nord Balt electricity cables — linking the Baltic grid to the Nordic one — and the LitPol Link, which does the same with that of Poland’s.

By 2014, the Baltics were already aware that in the face of a looming security threat from Russia, their relations with NATO would have to change. All three Baltic countries are committed since the alliance’s 2014 Wales Summit to pulling their weight, with all reaching the NATO minimum spend of 2 per cent by 2020. The variation between 2014 and 2015 perhaps comes from how stepped up defence spending increasingly pressed on government budgets, forcing Baltic governments to search in new places for revenues (Latvia’s Solidarity Tax, for instance) or cuts to public services.

The spectre of Daesh (or Islamic State, as they are also known) in Syria and Iraq has created the prospect of a common enemy for Russia and the Baltics, and therefore potential for common ground. Latvia did not rule out cooperating with Russia in this regard. Lithuania remains less convinced. While Russia’s focus on the Middle East has shifted global focus away from Ukraine, the Baltics have remained supportive and keen for the conflict not to be overlooked. They remain equally concerned about Russia’s military adventurism. As Christmas arrives this year, however, we see with relief many grim prophecies made by defence analysts of potential land invasions of the Baltics or the appearance of “Little Green Men” — Russian troops without military insignia, as used during the capturing of Crimea — did not come to pass in 2015, as they didn’t in 2014.

Less dramatically: it would be statistically equally unlikely, more or less, that our discerning tourist in either year is Russian. In 2013, the numbers of Russian tourists were much higher. But the numbers in 2014 are roughly the same as this year, the rouble remains weak, and so the prospect of shopping in the pricy euro zone has kept Russian visitors away. Nationalists in the Baltic countries may be pleased. Anyone working in the tourism sector may be far less so. 2015 has therefore seen a continued search for more tourists from round the world, and initial successes in 2014 have carried on through 2015.

The same could be said with trade with Russia. All three Baltic countries were hard hit by sanctions already in Dec. 2014, particularly in the agriculture sector and companies working to transit goods. The search for new trading partners was also already underway back then. All the Baltics have gradually consolidated closer trading links with countries like China and Turkey by way of compensation for dampened trade with Russia over the last year.

Another imagined change might be in the way our tourist arrived. They still could not have taken Rail Baltica, though 2015 has proved to be a year where the vision of a train line linking Berlin to Helsinki moved a few steps closer to reality. Yet in 2014 they could have flown into Estonia via Estonian Air, or into Lithuania via Air Lithuanica; in 2015, they could not. Both airlines have since gone bust in spectacular fashion. Estonian Air has just about emerged like a feeble phoenix out of the ashes in the form of Nordic Aviation Group — rather unfortunately nicknamed Nag — while Air Lituanica has been unreplaced, leaving the field open to budget airlines like WizzAir and Ryanair to dominate Vilnius Airport (which in and of itself is not too much of a change. Precious few passengers were flying with Air Lituanica anyway, hence they went bust.)

The man behind Air Lituanica was the Vilnius Mayor Zuokas. If the tourist had asked the seller in Lithuania last year who the mayor of Vilnius was, they would have replied that it was Zuokas, perhaps making a joke about the man’s extravagant plans of city council-owned airlines, Wi-Fi taxis, app-based public transport, and his remarkable publicity stunts that included running over cars with tanks to illustrate parking restrictions.

Zuokas certainly ran the capital with flair. Yet flair ultimately did not pay the bills or keep the voters interested. By Christmas 2015, after fresh mayoral elections in March, the Lithuanian seller — unless hopelessly out of touch — would be referring to Mayor Simasius, a man elected with the purpose of cutting away at Zuokas’ projects, and bring a dose of austerity (he would probably say reality) to the Lithuanian capital.

In Riga, however, it would be business as usual, with Nils Usakovs in charge, the same this year as last. Unsurprisingly, his party, the largest in the Latvian parliament (the Saeima) still has no chance of leading the country, remaining just as consigned to opposition as it was in 2014. Language and ethnicity remain dividing lines of political debates as much as ever.

In Tallinn, after a year battling for survival, not just political but existential, the veteran Mayor Edgar Savissaar has fought back against toxic leg infections and corruption charges to remain in his post, seeing off challenges to his leadership from a new generation of politicians in his Center Party.

Right at the top, there is little change to report compared with 2014. In Estonia, the bow tie-clad President Ilves remains in charge; as does Europe’s youngest Prime Minister Taavi Roivas, now 36, who won a narrow election victory in March.

No change either in that regard in Lithuania, where President Dalia Grybauskaite still holds an iron grip, despite the increasingly assertive influence of Prime Minister Algirdas Butkevicius. In Latvia, the difference is actually quite pronounced, with a complete change since 2014. The bumbling President Berzins is gone, replaced by Raimonds Veijonis of the Greens and Farmers Party. The same goes for Prime Minister Laimdota Straujuma. She will be remembered for stewarding Latvia with charm and grace through its first Presidency of the EU Council in the first half of this year — a tenure that did a great deal to boost Latvia’s standing in the bloc, and was generally appreciated as a well-run presidency, given the difficulty of the wider geopolitical situation at the time. Bizarrely, despite her resignation, Straujuma remains at the helm for the time being. Just as in previous instances, Latvian politicians are cagey about going for the top political job.

One topic which caused apparently seismic changes in the Baltics is the migrant crisis. The furore — and fascinating introspection — this caused has undoubtedly brought Estonians, Latvians, and Lithuanians into a long overdue reflection over what it actually means to say you are a citizen of these countries. The imaginary seller would maybe know far more about the Mediterranean than they did the year before, certainly,  but they would only be able to say that one refugee family in the entire Baltic region had actually arrived as part of the EU quota. The Iraqi family arrived in Lithuania on Dec. 15, representing a miniscule fraction of the small share of the EU resettlement quota that the Baltics have agreed to, a quota which had caused widespread protest and anxiety as politicians struggled to find space and education opportunities for refugees.

Perhaps the change has been more psychological than anything else. The Baltics now realise they cannot count on the EU in the same way children count on Santa Claus to deliver presents on time. There is a realisation that it is much more of a quid pro quo agreement, and still a largely beneficial one. This is not to say that the Baltics should kowtow to all demands made by Brussels. But a balance should be struck between subservience and obstinacy. The vast amount of resources the EU has pumped into the Baltics since they joined in 2004 require at least some accommodation of refugees. Neighbouring Sweden is struggling to cope with 190,000 refugees from the Mediterranean in 2015. That is understandable. The uproar in the Baltics over an issue of hundreds rather than thousands is not.

There is more to the pressing pessimism of the news cycle, yet much to be cheerful about as we approach 2016, not least that the Baltics are possibly some of the most festive places to spend this time of year. The average citizen here earns slightly more in 2015 compared to 2014. Unemployment is down; emigration has slowed; international and local businesses from tech firms to farms are setting up shop — as are cat cafes. There are now cat cafes in all three Baltic capitals. So although I have no idea what 2016 will bring, I know that right now, it’s not all doom and gloom.