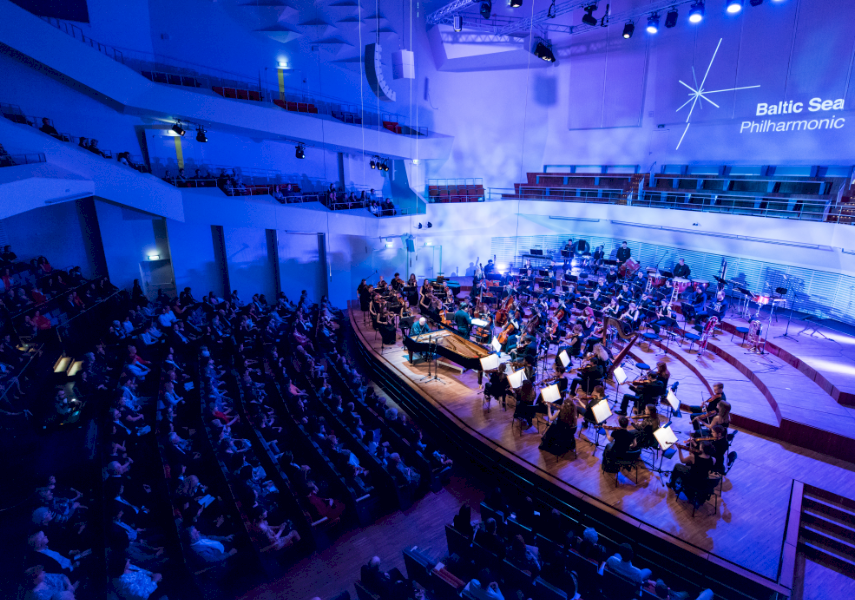 On April 16, Liepaja’s new and imposing Great Amber Hall hosted the Baltic Sea Philharmonic. It was all gracefully conducted by the orchestra’s music director, Kristjan Jarvi, an Estonian now based in Florida.
It was the second concert leg of their Baltic Sea Landscapes Tour, which had seen performances in Kaipeda already, and Tallinn, Helsinki, St. Petersburg, and Moscow will all soon be following suit.

The tour has allowed Jarvi to introduce and showcase his new orchestra taking his audience on a journey of imagination across seas and landscapes, introducing nature and wildlife through the medium of classical music.
And I have to say, it was an impeccable performance that was both electrifying and enthralling, and one which saw Jarvi bringing down the house.
Much of the concert resonated with his philosophy of living for the moment — being present and conscious, with the charismatic youngest member of the Jarvi conducting dynasty making an almost spiritual hypnotic connection with his audience.

For Jarvi it is important that the audience enjoys itself first and foremost. For him the occassion requires a spritual sense of dedication. “You can’t make music just floating around, you have to be present and conscious … and create a flow, and that flow creates a wave, and that wave creates a movement. That movement changes things,” he told The Baltic Times.
Raising awareness of the environment has been one of the cornerstones for this tour.

“As humans we create the environment between each other,” he says. “It is also our neighbourhood. The sea gives us life, the trees give us air, and we all have to take care of it. We have to be connected to the greater environment in our daily lives, and then we realize that there are no differences between peoples or nationalities. The whole planet is ours. It doesn’t matter where you come from or what your story is. We must take care of each other, and of our earth.”
Kaisa Kortelainen, a flute player in the orchestra, has stated that in her view, Jarvi has an attitude that the world of classical music, still to some extent stuck in its ivory tower, should welcome.

“A subdued concert etiquette is still very much alive, keeping many people at bay. We can and should have everything, and I believe Kristjan’s way of making music will very likely attract an all-new kind of audience,” Kortelainen has stated.
Indeed Jarvi breaks all molds of a traditional classical music conductor. His exuberant movements are a delight to watch, ranged from foot stomping, sudden leg kicks thrust into the air, balletic wild leaps high into the air while on the podium provided a degree of entertainment. It also forced one to be riveted on Jarvi and at times his visual gestures caused a somewhat distraction from the music.

But importantly he and his devoted musicians without doubt gave a life-enhancing musical experience for many in the audience.
The Baltic Sea Philharmonic showed impeccable musicianship. And even after a full day’s rehearsal, a recording session, and a pre-concert dress rehearsal, it remained high in both spirit and unbridled energy for their evening concert, showing an exhilarating display of superb technical mastery and commitment from all the orchestra’s sections.
The concert program consisted of Sibelius’ Karelia Suite, Part’s Swansong, Prokofiev’s Piano Concerto No. 3 in C major, Stravinsky’s Firebird, and the composition Mountains. Waters (Freedom) by the 30 year old Lithuanian composer, Gediminas Gelgotas.

Gelgotas was awarded the Lithuanian Young Artist Award in 2014, being one of three young artists who have been honoured by the Lithuanian Culture Ministry for their cultural achievements in the past three years.
Gelgotas told The Baltic Times that the 15 minute work, which was premiered at the Tonhalle Zurich in 2015 with Jarvi conducting, fits the new energy of the Baltic Sea Philharmonic.

“Mountains. Waters. (Freedom) is about us, the Baltic States, about our nature ... We have waters, the Baltic Sea, and we all had to become independent to find this way to freedom,” said Gelgotas.
It is a natural composition, both dark in colour tones and voluminous. Gelgotas was inspired by pop music. In his piece, he aims to explore the enormous latitudes around us and inside us.

“It was my idea and desire to create a sound and a musical structure in which all processes run as economically as possible and in which its inner elements constantly transform into new figures,” said Gelgotas.
The composition was initiated by Jarvi. The two have been collaborating for almost six years.
“Kristjan is conducting all the music that I write. The birth of my First Symphony, Extracultural, was also initiated by him. The world premiere was held at the Leipzig Gewandhaus, with Middle German Radio Orchestra.”
Jarvi programs and performs Gelgotas’ music regularly. Gelgotas’ composition Never ignore the cosmic ocean had its world premiere at the Berlin Konzerthaus, again conducted by Jarvi.

Gelgotas will be composing much new music for projects with the Baltic Sea Philharmonic in the coming years.
Prokofiev’s Piano Concerto No. 3 in C major saw Alexander Toradze one of the great Prokofiev proponents join the orchestra as soloist.

The orchestra celebrates Prokofiev’s 125th anniversary on April 23 with a concert in Moscow.
Toradze describes Prokofiev’s Third Piano Concerto as being like champagne.
“It has a variety of geographical and ethnic identities — Russian, Jewish, and Japanese. It is extremely cosmopolitan, a kaleidoscope of themes from many different parts and even many different times in his life,” said Toradze.
In describing his excitement of working with the Baltic Sea Philharmonic, Toradze stated that it reminded him of how exciting every note is, and should be.

“Everything is doubled; double challenge, double pleasure, double inspiration. It’s no regular concert: it’s a concert with serious consequences.”
What Jarvi wishes to achieve with his new orchestra is to create a sense of how our world should be.
“The idea of how harmony is created is through the things that really count. When people are shown around in a city, they are shown cultural things. Buildings like architecture, literature, philosophy, music, traditional handcrafts, and all sorts of stuff like that, that’s what people are shown,” said Jarvi.

“They are shown the culture of the people, and also beautiful nature, ‘wow, look at this place,’ because you are connected with the Earth, and the sky and nature. And all of our societies evolve around that. Not some kind of antagonistic nonsensical stuff that is used to confuse people out of this natural state of being.”
Jarvi wants to elevate people to a higher state of being and understanding.

“We are all actually united; even though we may all be from different countries, we shouldn’t ever kind of forget our identities, because that’s what makes us strong as nations, but we also have to see that we are together in this, and that the more we bind together, with confidence, the more opportunities we give to each other.”
Returning to the environment, a theme which runs through the tour, Jarvi told The Baltic Times: “If we don’t connect ourselves to nature, have that manifested in our culture, and through what we do, that means our culture has no meaning, our existence has no meaning, and actually then we are just, we might as well be unconscious, this is actually, a message for people, to unite and wake up.”

Further information on the activities of the John Nurminen Foundation can be  found at the website www.johnnurmisensaatio.fi