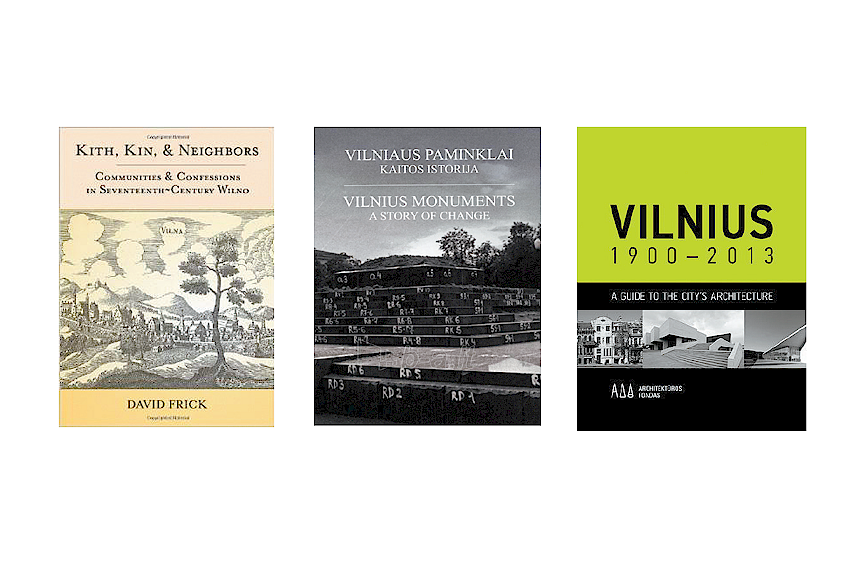 Kith, Kin, & Neighbors is a monumental work by David Frick, Professor of Slavonic Languages and Literatures at the University of California, Berkeley. His far-ranging research on the inner workings of 17th century Vilnius bring the streets alive as he talks about the various confessions that took root, including Catholics, Evangelicals, and Orthodox believers. Though several fires in the 16th and 17th centuries ravaged precious archival material that was stored in Vilnius, there are several documents and records, including baptism and marriage records, litigation, and educational institutions’ registry lists  that help to flesh out the often complex and surprising relationships between the numerous faiths in the city.

Vilnius Monuments: A Story of Change

Over the last 150 years, Vilnius has seen its share of change. One of the more noticeable but easily forgotten aspects of this are a city’s monuments that come and oftentimes go in a flash. This bilingual book takes a look at many of the monuments throughout the recent history of Vilnius that have all but disappeared in the dusty annals of history. This fascinating analysis of monuments also sheds light on the role that monuments are given after regime change and how much the cityscape can change, rendering it almost unrecognizable.

This guidebook shows the varied styles of architecture in Vilnius over more than 100 years. From the wooden house architectural gems of the Zverynas neighborhood to the more innovative concrete buildings of the Soviet era all the way up to the conceptual residential areas and surprises of today, readers can find previously unpublished photos and information on many of the city’s most prominent buildings. The sections that focus on the first part of last century, the interwar period, the Soviet period, and today’s architecture provide an easy-to-follow intro to a city that continues to add new styles.