Ashes in the Snow is a testimony of truth about Lithuania 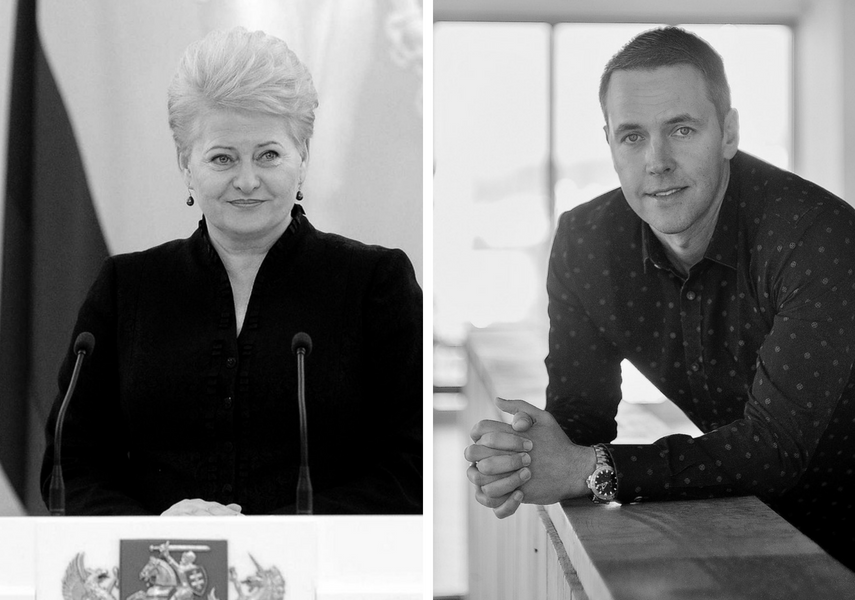 The film Ashes in the Snow, due to be released worldwide in October 2018, is the coming-of-age tale of Lina Vilkas, a sixteen-year-old Lithuanian girl deported to a forced-labour camp in Siberia amidst the reign of terror which Stalin wrought in the Baltic States during the Second World War. Vilkas, an aspiring artist, secretly documents her harrowing journey through her drawings, risking her life and using her art to secretly send messages to her imprisoned father to let him know she’s still alive.

Ashes in the Snow is based on the 2011 novel Between Shades of Gray by Ruta Sepetys, a Lithuanian-American writer who based it on the true story of Irena Spakauskiene, a 13-year-old Lithuanian girl who was deported from Lithuania to Siberia in 1941. Sepetys is a number one New York Times bestseller, international bestseller and a recipient of the Carnegie Medal. She’s also a Rockefeller Foundation Bellagio Fellow, and the first Lithuanian-American writer to address the European Parliament. Sepetys has stated that her story and the associated part of history have remained untold for some time. “The book didn’t sell right away, but when [the publishers] Philomel and Penguin jumped on board their belief was unwavering. And then Penguin’s sub-rights team and the international agents sold the book in over 22 countries. I can barely wrap my head around it. I’m so grateful, and when I think of all of the people who thought this story would never be told I’m overcome with emotion.” Between Shades of Gray has sold one million copies, has been translated into 27 languages and has also been included on the US high school literature reading list.

In connection to an April visit to Washington DC, the Lithuanian President Dalia Grybauskaite stated at a private screening of the film at the Capitol building that Ashes in the Snow is a testimony of truth about Lithuania, and that it’s a true story about Lithuania’s destiny, deportations, sufferings, and unconditional fight for freedom. The film will be released as a worldwide testimony of truth about a nation that resisted and survived annihilation. The President further said that Ashes in the Snow will enable Americans and people around the world to better understand the Baltic countries, and why they treasure freedom and independence so much.

Ashes is the Snow is directed by Marius A. Markevicius, a first generation Lithuanian-American who shot the film in Nida, Vilnius, and Kaunas. Markevicius attended UCLA’s School of Theater, Film and Television Producer’s Program, and graduated with a Master of Fine Arts. He recently spoke with The Baltic Times from Los Angeles about the emotional experience of making the film, the private screening for the Lithuanian President, his relationship with Lithuania and what it was like growing up as a Lithuanian in the United States.

The film centres on the question of wondering what human life is worth. Was making the film an emotional experience for you, and what did you learn about the value and worth of human life from the process of directing it?

Yes, the entire process has been an intensely emotional and personal experience. It’s taken about five years from the first time I met the author of the source novel, the Lithuanian-American Ruta Sepetys, until today and the finished film. We’ve put a lot of blood, sweat and tears into the entire process from the script-writing, to raising financing, to pre-production to the actual filming and editing process. In addition, the story itself is very personal given my family background. We had some family members who were sent to Siberia during the Soviet deportations. Some survived, some didn’t. Thus, there was a great sense of personal responsibility that went into the filmmaking process. I did as much research as possible to make sure the film had authenticity. And in that research there are a lot of incredible stories and harsh realities that were sometimes even hard to believe in terms of what the deportees had to endure. I have such a huge respect for the deportees and their incredible will to survive and their ability to never give up hope. It’s certainly a lesson for all of us.

The original title of the book on which the film is based is Between Shades of Gray. Why did Ashes in the Snow replace the book’s original title?

We decided to change the title for the film to avoid any confusion with Fifty Shades of Grey. The topic is just too important and serious to be mixed up with that other film.

How was it as the director of the film to work alongside the novelist Ruta Septys. Did you always see eye-to-eye about how the material from the book should be interpreted and filmed?

Working with Ruta has been an incredibly positive experience. She’s also an executive producer on the project. Ruta has such a good story-telling sensibility that her input in the script, the film production and editing was always super-helpful. And she really allowed us to have creative licence and make some changes to the story that we thought would be beneficial for the film. But in general we tried to stay true to the novel which has sold over one million copies and has so many fans all over the world. And it’s such a well written novel and great story, so if it ain’t broke, don’t fix it!

The private screening of the film took place in the US Capitol for the President of Lithuania, members of Congress, the Lithuanian Embassy and diplomatic corps. It must be very emotional to witness the power of a story to create a global dialogue. The Lithuanian President stated that the film will be a worldwide testimony of truth about Lithuania that resisted and survived annihilation.

It was an incredible experience to screen the film for the President of Lithuania and members of Congress in the Capitol building. President Grybauskaite gave a very emotional and thought-provoking speech after the film which I’ll never forget. It was really a dream come true to screen this film in the Capitol building, a symbol of our great US democracy. To give this story that exposure to members of Congress and other diplomats was really important to me. We hope the film can help raise awareness about the history of the Baltic States and what they endured at the hands of the Soviet regime.

Was Lithuania’s resistance and how it survived annihilation the main theme you tried to capture?

‘Ashes’ is really a coming-of-age story in the most difficult of circumstances. There are universal themes of how love and hope can be the greatest weapons against evil and tyranny. Our main character, Lina Vilkas, is a 16-year-old aspiring artist. She’s planning her summer and hoping to be accepted to a summer arts programme when her family is arrested by the Soviet army and sent to Siberia. She’s a normal teenage girl who then becomes subjected to the horrors of war and displacement. I think there aren’t many films that capture that young person’s perspective of this Siberian deportation experience. The novel did such a good job of intimately capturing Lina’s experience and we tried to do the same with the film. It’s a very personal intimate film and portrait of a teenager’s experience and perspective.

Do you believe, as the Lithuanian President does, that Ashes in the Snow will enable Americans to better understand the Baltic countries and why they treasure freedom and independence so much?

It certainly was one of my main goals with the film, to help inform Western audiences about the history of the Siberian deportations. The amount of suffering and death that occurred constitutes a genocide, yet it’s a genocide that not many people know much about. In US history books there’s very little mention of Joseph Stalin or the horrors that his regime inflicted over so many years. That has to change and hopefully the film will help institute some awareness and change. And also given the situation in Ukraine and tensions with Russia on the Baltic borders, it’s critical for people to know and understand the past so that it can’t be repeated.

The film will be released in October 2018. Will it be distributed worldwide?

Who provided the funding for the film?

The film was financed with a combination of cultural grants and private equity investment.

You were born in the United States to Lithuanian parents. What’s your relationship with Lithuania and what did you learn about Lithuania growing up? Do you visit Lithuania regularly, and do you feel Lithuanian in your cultural outlook?

Yes, I was born and raised in Los Angeles, but our household was very Lithuanian. Lithuanian was my first language at home and my sister and I attended a Lithuanian Saturday school for many years. Our house was full of Lithuanian books and art and stories from my parents and grandparents of Lithuanian history and legends. So, Lithuania was always a very magical and mystical far-away place when I was kid during the 1980s. We couldn’t visit during those Soviet times, but after independence I was able to visit for the first time in 1992 and it was an incredible experience. At first a bit of culture shock for a kid from L.A, but over time Lithuania has changed and developed very quickly so now it feels so close and natural to me, like a home away from home. I travel there often and have stayed close to family and friends out there. And since we filmed ‘Ashes’ in Lithuania I spent my longest time there during the production so it’s really become like a second home for me.

You also directed The Other Dream Team, a documentary about the inspirational story of the 1992 Lithuanian national basketball team and their journey to the bronze medal at the Summer Olympics in Barcelona. The fall of the Soviet Union allowed Lithuania to re-establish its independence and enter the Olympics as an independent country. After 50 years of Soviet oppression, the Lithuanian basketball team became a symbol of hope and liberation. Does it remain relevant to tell stories about the Soviet occupation and oppression of Lithuania decades after regaining independence?

I think it’s absolutely relevant to tell stories of the Soviet occupation. The Soviet Union did an incredibly good job at using propaganda or simply hiding the truth about its own history. And therefore, there’s still very little information about those times and much of it is just starting to come to light. Also, people are just starting to feel more comfortable to speak about it. I noticed this during the making of my documentary. You could get a sense that it was the first time that many of those basketball players were ready to talk about some of the subjects that had previously been off limits for fear of retribution against themselves or their families. Now things are much more open. And many people have stories to tell. And they need to be told.

What are some of your future projects? Will they feature further topics relating to Lithuania?

Right now my focus has been 100 percent on the completion and distribution of Ashes in the Snow. But I’m starting to think about my next projects and there are a lot of different ideas on the table. Some involve Lithuania, some don’t, but I do know for sure that the projects I’ve done related to Lithuania have been very rewarding. So I’m not ruling out another one on that topic!

What message would you like to send Lithuanians as the country celebrates its centenary of restored independence?

Happy 100 years of restored independence. I admire your ability to persevere and survive and flourish against all odds. Lithuania is a small country geographically, but it has a massive heart. Cheers to the next 1,000 years and beyond!