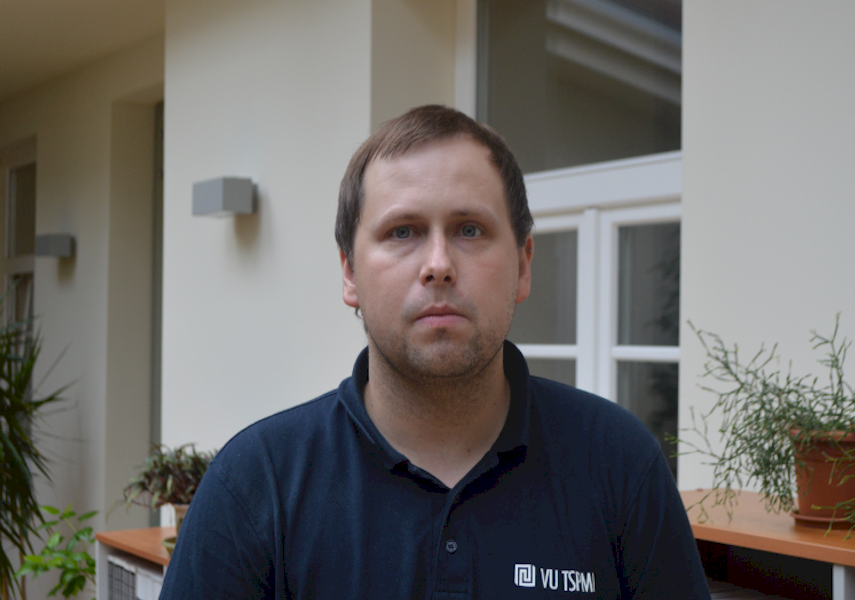 KLAIPEDA - With the autumn parliamentary session in progress, Lithuanian media is awash with tantalizing and tempting proposals by Lithuanian MPs. Most of them, like the initiative on nearly one hundred euro higher minimum wage, are obviously made with the upcoming Lithuanian Parliament (Seimas) election in mind. How to sort out the wheat from the chaff and get the real measure of the parties? The Baltic Times sat down for an interview with the Lithuanian politics wizard, Mazvydas Jastramskis, a domestic politics analyst and lecturer of the Institute of International Relations and Political Sciences at Vilnius University.

When you look around, do you see any opening salvos of the upcoming electoral campaign? What are they?

I always tend to think that an electoral campaign is always ongoing regardless of the time. Not so far from the election, the intensifying of electoral rhetoric is already clearly tangible, so, using political terms, we can definitely say the electoral cycle has started. At this stage, it is cranking up, as the parties start more actively to preach their ideas. I’d say the euro-parliamentarians, who also happen to be the chairmen of parties (there are four MEPs of that kind- Gabrielius Landsbergis, chairman of Homeland Union-Lithuanian Christian Democrats (HU-LCD), Rolandas Paksas, chairman of Order and Justice Party (OJP), Valentinas Mazuronis, leader of Labor Party (LB) and Valdemaras Tomaševskis, chief of the Electoral Action of Poles (EAP), an ethnical Party-L.J), are at the forefront of the campaign. Look, the Labourists are again pushing forward the idea of minimum wage being at 437 euros (the Social Democratic Government has agreed to hike it to 350 euros from Jan. 1, 2016) and other parties are eagerly churning up their own ideas. All of this falls very well with the trends in the electoral cycle elsewhere – governments tend to raise wages and social pay-outs during that time.
Personally, I am very curious to see how the new Labor Codex draft will unfold – what final shape will it get after all those amendments. Frankly, I struggle to understand it against the backdrop of the nearing election. I believe the liberalization of a Labor Codex before an election is not the right thing to do.

What do you believe to be the reason for the introduction of the contentious labor legislation now rather than in the beginning of the tenure?

It’s really hard to tell, frankly. One has to be in the inner circles of politics to know why it has been proposed now. I have the impression that the draft, drawn up by a group of scholars, has not only been very dragged out in terms of the deliberations and adoption, but also has fallen out of the hands of the ruling Coalition. It has become kind of independent and self-moving. Few doubt the labor legislation needs to be reviewed, but the timing raises many questions, as I said. It can definitely ill-affect the ruling parties’ ratings at the end of the day.

But they withstand the criticism so far, you have to agree.
Well, it is still a subject of deliberations and not a single politician can be pinpointed as the man behind the new Codex. But this may change once it gets passed. In politics, it is very important to divide responsibility evenly. I mean if it will play out as something coming from others, not the Government, then neither it nor the Prime Minister will get hurt. Yet, it remains to be seen how it all ends. That it will be an unpopular decision, one can predict taking into consideration the population’s conservative economic views.

Do you believe that some so-far petty issues, like speculations on the PM’s son-in-law’s acquired shares of a PR company, have the potential of damaging Butkevicius, the PM?

Well, how damaging it will be to the Prime Minister and, subsequently, the Coalition, remains to be seen, as the history has not escalated yet and has not been pushed under the cover either. But whenever it can be related to protectionism and corruption, it has the potential of hitting the ratings. On the other hand, I often think that Algirdas Butkevicius and his ratings are scandal-proof-- so adamant he seems. The afore-mentioned history still lacks clarity.

How unique is PM Butkevicius and his led Social Democrats on the political arena of modern Lithuanian politics?

Indeed, although the support ratings are prone to change, the current SD leader is an obvious standout in the modern politics. Still, I would not dare to say now he and his party will breathe a whiff of victory in the 2016 election. If we were to look back to the first half-year of 2003, the alignment of the parties’ ratings was exactly the same as now – with the Social Democrats being clearly on top. But to remind one, in the 2004 Seimas election, they were crushed by the Labor Party. So the question now is perhaps this: can there emerge some party and make it to the top? I would doubt whether it is possible, but there might be a player in the race who will chip away a chunk of the SD electorate.

The Parliament apparently does not want any more new players in the election next year. Is it not therefore a fresh decision to disallow societal movements from taking part in the parliamentary election?

Before I answer this, I want to underline that no party has ever managed to win consecutive Seimas elections in Lithuania. What we’ve seen in the past is strong retrospective voting against those in power. But as now the economic situation is improving-- and this is supported by  European Social Research preliminary data that I took a glimpse at-- I would not be very surprised if the Social Democrats were to retain high ratings until the election. Still, they do not guarantee the party results enabling it to form a new Coalition.
To go back to your question, I think that, following the general primaries to local Councils last March, many new societal movements have emerged and many traditional parties weakened as a result. Not surprisingly, the Seimas does not want to see the parties getting weaker on the parliamentarian level and intends to put an end to societal committees’ Seimas aspirations. Now it remains to be seen how many independent candidates will manage to win Seimas seats in single-mandate electoral constituencies.

Which parties are likely to rake up the votes that new societal committees would have possibly gotten in the election?

It is very hard to tell, as the votes are so eclectic. Reliable research shows that, in Lithuania, around 50 percent of Lithuanians still do not have a clear political identity. Political behavior is more predictable in Estonia, for example. The situation in Latvia is even worse than in Lithuania. But in Lithuania, unlike in Latvia, the factors of ethnical identity and geopolitics are not so important. The political identity of the other 50 percent is also not very strong, I’d say. Only the Conservatives’ electorate is consistent and strong, as the Liberals are just raising their electorate. Social Democrats’ electoral base is strong, too, but it is not as solid as the Conservatives’, I believe. Meanwhile, the Labor and Order and Justice Party’s electorate is very shaky, depending on many consequences.

The Seimas is apparently willing to pave the way for e-voting. Do you see it as a chance for Liberals?

To some extent, yes. But on the other hand, there is no research done on how e-voting will impact the turnout. But as I said, the parties which boast younger voters stand a better chance with the introduction of e-voting. I’d say that other parties, like Social Democrats, for example, also hope that it will play into their hands. Their delegated Interior Minister (Juozas Bernatonis-L.J) has done quite some work as to how to change the country’s election system. Perhaps he, as well as the party, will be showing themselves as ones who care about having the political system better adapted to the voters’ interests.
The nomination of the new party leaders-- I am talking about Gabrielius Landsbergis of the HU-LCD and Valentinas Mazuronis of Labor Party-- has not boosted considerably the parties’ ratings. Why is that?
Speaking of the Labor Party, the causes are deeper than changing their leader. It is a party that is based on a rather simplistic programme, but once it finds itself in power it will not be able to deliver on its promises. When it comes to the Conservatives, Gabrielius Landsbergis is a typical Conservative politician-- frankly, one incapable of attracting voters who would not usually vote for the Conservative party.

What is Gabrielius Landsbergis missing?

I really do not want to try to come up with any of his shortcomings or minuses as the leader of the party, but the Conservatives are the least likeable party among the other parties’ electorates. Still, let me say that his biggest flaw is that he carries the name of Landsbergis, I believe.

With the departure of Valentinas Mazuronis, the Order and Justice Party has not bled out, virtually keeping up public support in the range of 10 percent. Do you believe opening the Seimas door for Rolandas Paksas, the OJP chairman and an ousted Lithuanian president, could ramp up the party?

I’d say that OJP voters’ sympathies to Paksas are less than Labor Party electorate’s affinity with Viktoras Uspaskichas, the LP honorary chairman. The departure of Valentinas Mazuronis, quite a likeable and predictable politician, has been a blow to the Order and Justice Party and the chairman, obviously. Allowing Paksas run in the election would stabilize the party and improve the party’s chances of clinching parliamentary seats. It had seemed at one point that it might stay empty-handed. OJP is still in search of its ambit on the political stage. I reckon it might turn into a party of eurosceptics (Paksas stood against the euro adoption and mandatory refugee quota distribution-L.J) eventually, especially now, amid the refugee crisis. Their potential might seem better then.

It is too early obviously to speak of the candidates for the next presidential race in 2019; however, what is its likely line-up?

It is really too hard to speculate now, obviously. Some are talking about Antanas Guoga, Liberal MEP, as a potential candidate. Others mention Vygaudas Usackas (EU ambassador to Russia), but now that is in question, as he seemingly strayed away from Conservatives. Zygimantas Povilonis, former ambassador to the US, might also be on the list, just he is not very well known, perhaps. Voldemaras Tomasevkis of EAP and afore-mentioned Rolandas Paksas, if Seimas removes the hurdles for the latter, are also predictable candidacies. Some other names will certainly pop up, but I’d note that the past presidential elections have seen a shortage of personalities.

Speaking of the refugee crisis, can it prop up nationalistic parties and thrust them to power? Both in Eastern and Western Europe?

When it comes to Western Europe, it is pretty obvious that immigration is the largest splinter in post-WWII society. The political identities of some of the parties out there are namely based on the stance on immigration issues. In addition, they are also eurosceptic parties as a rule. In Lithuania, emigration, not immigration, has been a big issue until now, but with the refugee crisis exacerbating, I believe we might see a breaking point with the public shifting to prolonged discussions on immigration. I find it quite possible that some parties, like Order and Justice Party, can get radical on the issue. It has always “flirted” with radical ideas in the past. However, it remains to be seen whether the refugee crisis will be an acute topic a year from now, let’s say.