All aboard the Klaipeda Sea Festival 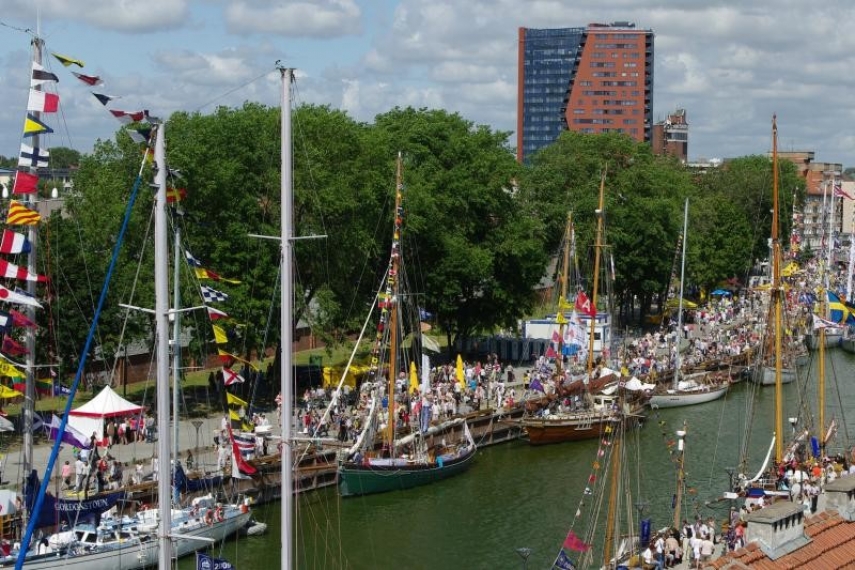 SETTING SAIL: The Lithuanian seaport town of Klaipeda has had a rich maritime tradition for many centuries.

KLAIPEDA - The tradition of the Sea Festival is one of Klaipeda’s valuables and a historical gift which represents the city and its nautical nature. Driven by innovative and bold ideas, the Sea Festival is opening a new historic page. The hottest event of the summer is inviting you to the Fiesta in the City of White Sails on 24-26 July! Nautical, artistic, recreational, sport-related events for children and families will spread around the Old Town.

On the last weekend of July, Klaipeda dressed in restless winds will be embraced by white sails, nautical events, bright ideas, and resonant musical rhythms.
“The Sea Festival is the most well-known and, according to sociological research, the best rated event in Klaipeda by the country’s citizens. Hence, we are particularly glad that the festival which is expected bring more than half a million of guests into the city has recently started to highlight nautical events, traditions of the marine culture, thus strengthening Klaipeda’s marine image,” says Klaipeda City Mayor Vytautas Grubliauskas, thus inviting everyone to the 56th annual Sea Festival.

“Whilst organizing the festival, which has over eight decades of experience, every year we feel great responsibility and commitment. To preserve what is most beautiful, yet to find a new angle to improve what we have even more is a great task. Dedicated to those who love the sea, this time the Sea Festival will become the White Fiesta, and Klaipeda will be the City of Happy People, which you can already plan your summer around,” said Romandas Ziubrys, head of PI “Klaipedos sventes”.

The organizers of the Sea Festival are planning to fulfill its theme by using elements of city decoration, artistic projects, and all the guests of the Sea Festival.
“The idea of the “Fiesta in the City of White Sails” was born whilst dreaming about the warm summer and all of the events taking place this year in Klaipeda. It is very important to us that the most anticipated fiesta of the summer would be as a single organism which binds various events together due to their theme and symbols.

Hence, fulfillment of the theme is a crucial task for every creator of an artistic program. We encourage every guest of the Sea Festival go through their wardrobes and find various white garments and accessories to match the theme,” said Goda Giedraityte, Creative Director of PI “Klaipedos sventes.”

Klaipeda’s Old Town will be painted white for three days. All traditional, nautical events, regattas, and water sports events will have white sail decorations. On the especially warm days guests will be lured into town for the White Afternoons-Siestas which will invite you to attend the Sea Festival fair which will enchant you with exquisite smells and tastes, as well as beach and city sporting events, Theatrical Action Street improvisations, water fountains, nocturnal funfairs and fireworks.

“We can now promise that this Sea Festival will be full of quality-time surprises and pleasant discoveries. However, in order for the wait to be worth it, we do not want to reveal everything. And even though the biggest events have already been agreed upon and fully organized, we invite those who want to become a part of the Sea Festival and other similar events to share their ideas with us and join the ranks of the Sea Festival’s creators,” says Giedraityte.

“The festive procession is one of the most beautiful and spectacular events of the Sea Festival. To be able to be a part of it, to display one’s creativity and wit has always been a matter of honor and prestige, hence, we want to encourage every citizen and the community of the port to actively join the festive movement. Last year’s procession hit a record with its number of participants, hence, we are sure that this year’s procession will be even more profuse and bright”, said Arvydas Vaitkus, the Chief Executive of Klaipeda State Seaport Authority and a sponsor of the Sea Festival.

During the Sea Festival, the Sovereign Military Order of Malta, the longtime partner of Klaipeda City, will be taking care of citizens and the city’s guests. Centers/tents marked with the organization’s symbol will be located near the main venues in the city. Here, people will be able to get first aid provided with accredited instructors of the Knights of Malta.

“We are very glad that the most significant events in the city do not only gather people around for fun but also encourage being responsible. This is the first time the volunteers of the Knights of Malta are a part of the Sea Festival’s ranks, and they will ensure that the festive environment would only leave positive memories, and so that there would be no space for a bad mood in the city,” said Romandas Ziubrys.
Apart from the stationary centers ensuring good health, volunteers of the Knights of Malta will be circling the city to be able to provide first aid to those who request it.