A visit to Ukraine’s wounded soldiers 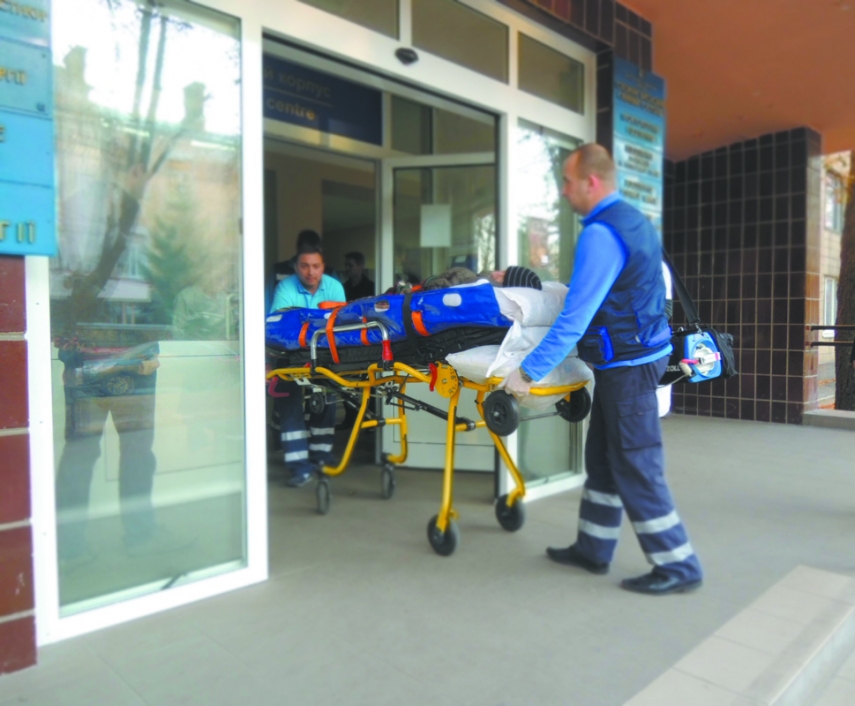 TAG: Almost all of the needs of Ukrainian soldiers were satisfied with the volunteer support.. Volunteers help to transport an injured soldier. 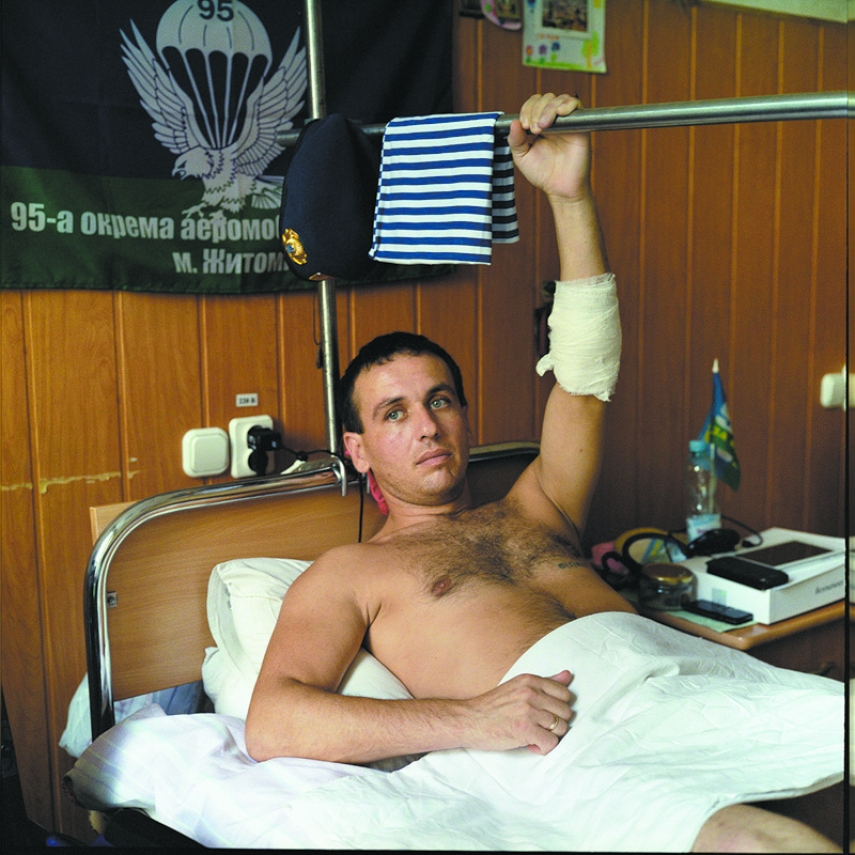 STEADFAST:The Ukrainian soldiers are ready to to persevere in efforts to remove the threat of war till the very end

While Nato intelligence reports last month showed that Russia is continuing to supply arms, munitions and supplies to separatist forces in eastern Ukraine, the Ukrainian army remains severely under-equipped and the casualty rate remains high.
It is now over one year on from the Vilnius Summit when, just a few days before the summit began, Ukrainian President Victor Yanukovych first walked away from a political and free trade pact with the EU in favor of closer ties with Moscow.
The events that followed have come at enormous human cost, with around 9,000 casualties since the conflict between the Ukrainian government and the pro-Russian separatists began in April this year. As the grim prospect of a harsh winter closes in on Ukraine, TBT reporter Uliana Domasheva visits Kyiv’s Main Military Hospital to assess the current situation.

KIEV - Kiev, Ukraine — Soldiers from the Military Hospital claim they have got only hats and jackets from the government to prepare for the winter coldness. Nevertheless these people are ready to persevere. The Main Military Hospital of Kiev is the place where soldiers from all over Ukraine come after getting injured during the government’s counter insurgency operation in Eastern Ukraine, which is still going on in spite of the ceasefire accords signed earlier this year in Minsk.
Recovering at the Hospital are militants from both the Armed Forces of Ukraine and from the volunteer battalions. The difference between a professional soldier and a volunteer is almost imperceptible here. Now dressed in bandages rather than uniforms, each of them has shown similar willingness to die defending their homeland and express similar feelings about why.

The salary of a regular soldier in the Kiev Government’s counter-insurgency operation is 3 700 UAH per month which is approximately equal to 200 euros. A personnel officer earns 8 000 UAH, which is a little bit more than 430 euros per month. But in spite of these modest salaries, and the risks they are taking with their lives, morale remains high at the hospital, with many claiming they will defend their country till the very end.

Sergiy is a 25 year old graduate from the Military Academy in Lviv. He used to be a part of Lviv’s airmobile brigade until he lost his leg in the fight near Lugansk. He has stayed at the hospital for almost 2 months and still does not know when he can return home.
But the atmosphere in the hospital is everything except depressing – people here are happy to be alive, they do not regret anything, and neither is Sergiy an exception. Even with full knowledge of the risks, he could not refuse to fulfill his duty. And as he said, he did not want to refuse because if people like him were not there, the enemy troops would be in Kiev already.

“Six months ago my wife and I celebrated the birth of our baby, and it was just at the time when I had to leave. It’s tough,” said Sergey. “The fact that young people go to the front is their personal civic position. But I’m also a father … I realized that I’d better go there by myself than let my son go. Parents should not have to bury their children, but now that happens all the time.”

Sergiy is also sure that life on the battlefield was easier than in normal life now. When he returned, it was hard for him to get used to the peaceful environment. For a long time he suffered from nightmares and could not sleep.
Another personnel officer of the Armed Forces of Ukraine, who is staying at the Hospital, refused to tell his name but gave his call sign – “Bear”. He is convinced the gunmen of the problematic eastern regions of Ukraine need the war because now there is a fight for control of lucrative business assets in the region. They are interested in continuing this war for their own  ulterior financial motives, he claims.

“Bear” also believes the fighters from the regions of Donetsk and Lugansk regions are for the most part made up of Russian officers, Chechens and simple local hard workers who believe they are doing something right and good that supposedly is defending their homeland from Fascism.

These are the sorts of opinions heard from the major general of People’s Republic of Donbass Igor Bezler, well known among the soldiers by his call sign “Demon”, who mentioned in his interview for Russian press that the main task for the militias now is to defeat fascism in Ukraine.
“We are not fighting with the Ukrainians, we are fighting Fascism, which our ancestors defeated together in 1945. We are fighting with the Nazis,” Bezler said.
Bear is troubled by this rhetoric. “They have the idea that we, the Ukrainian soldiers, eat the livers of five months old infants, drink blood and that we will kill them because they speak Russian, and we speak Ukrainian,” he shares.
According to Bear, the Ukrainian army faces some issues in personnel policy.

“The Army needs reforms,” Bear explains. “All these useless potbellied colonels who know nothing [and] understand nothing with their completely empty heads – all of them need to be removed …Not all of the colonels are useless, but most of them are. We need more smart volunteers. It is not necessary for them to be physically strong; most importantly they need to be emotionally stable. And if you bring in some alcoholics, drug addicts, idiots, they only hinder things”.
Because of the lack of necessary scouting techniques, or the lack of the latest military technologies, the fights in the East are now reminiscent of Mexican duels, the soldiers describe. Ukrainian militants can hear the shots nearby, but without the ability to ascertain where the hostile weapon has been fired from, they have to start the fights based on hearsay or from first hand sightings – by which point it is often too late. Also there is a chronic issue with communication between regiments.
“All the communication facilities are outdated and without established communication there is no interaction, there is no control,” Bear says.
Moreover, the militants from the Armed Forces of Ukraine have only reefing jackets and hats from the government. All other needs were provided for through civil volunteer support.

Despite these logistical setbacks, volunteers are doing their best to relieve the shortfall. While the government’s counter insurgency operation has been ongoing since April this year, the Ukrainian Ministry of Defense received 151 175 million UAH, equivalent to approximately 9 400 million euros, as an aid to the Armed Forces of Ukraine from businesses and individuals.

As winter closes in, and the situation in the east shows no signs of improving — with rumors circulating that Russia is attempting to “build a land bridge” to access its newly annexed territories in Crimea through the eastern part of Ukraine — such a strong civic volunteer spirit and the resolve of Ukraine’s troops both on the front and at home will continue to be tested.