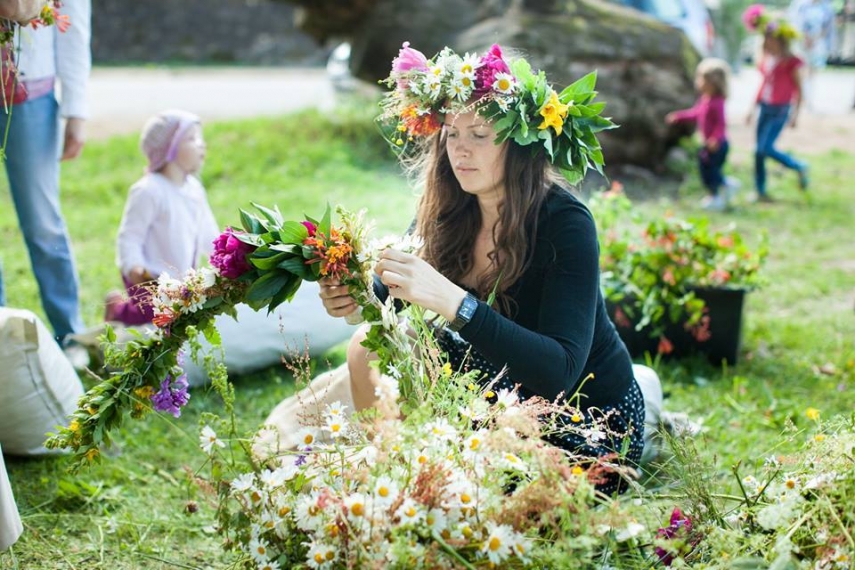 SUMMER LIVING: Flower picking is one of many activities on offer

Since pagan times, the Summer Solstace — the longest day and the shortest night of the year — has been cause for celebration throughout the Baltics. This year, the small Latvian town of Valmiermuiza is organising a quintessentially traditional array of festivities for Midsummer’s Day on June 21.

Just like in previous years, Solstice 2015 is a great chance to enhance and update your knowledge about Latvian traditions. Back in the good old days, one of the most important Midsummer Day traditions was visiting different houses and singing songs to the host and hostess, and of course asking for some beer and cheese while you’re at it.
The hectic rush of the digital age, however, with its never-ending streams of emails to answer, does not give so much time to prepare for receiving guests. So, to prepare, every host or hostess who hasn’t got free time on their hands before the Midsummer Day to make treats for the visitors has a chance to do so during the festival: from 12:00 to 17:00 there will be a fair, where everyone can buy almost everything they’d need  – starting from home made cheese and smoked meat, to wooden spoons and ceramic mugs. More than 80 craftsmen will arrive at the big summer celebration, offering traditional Midsummer cheese and bread, smoked delicacies, and if you’ve forgotten crockery, they even sell ceramic plates.

We all know that everyone loves a good host who gives some treat or other to each guest. Keeping in mind this tradition, Valmiermuiza has prepared a feast for the whole day. Everyone will be able to taste some of the “Valmiermuiza Beer”, and cook traditional and modern foods which are all made from different Latvian products.

Around midday, in the castle park in the “school of Midsummer traditions” and other workshops, there will be a chance to explore skills of crafting and different Midsummer rituals. Festivities with games, ancestral traditions and rituals will be enriched by the folk group “Mezabele” and the dance group “Sudmaliņas”. The guests will be invited to find out everything about the special Midsummer grass, which is collected only in Midsummer`s Day; they will then have the chance to make flower crowns and even their own cheese.

Of course, the event isn`t only about educating people about Latvian traditions; it is about entertainment, too. There will be a folk dance concert in which some of the best Latvian dance collectives will take part. Later on, the neofolk group “Vetras saites” will take to the stage; and after it, modern folk music group “Perkonviri” will be performing. At the stroke of midnight, as a grand finale, the park will be filled with songs performed by “Jauno Janu Orkestris” (New Midsummer Orchestra) together with musicians from group “Dzelzs vilks” Juris Kaukulis, Kaspars Tobe and others.

The Solstice tradition in Valmiermuiza was started in 2011, when a week before Midsummer Day, new, modern, but still full with traditions, event “New Midsummer Day” was held. Already then, the organizers hoped that this modern solstice celebration would become an annual tradition, Zane Kake, one of the event’s organisers, told The Baltic Times said Zane Kake. In 2012 the celebration got a new name which had to make an association of interaction between traditions and modern lifestyles. From various options, the organizers chose “Solstice”. In the spirit of reinvention, the event is happening already for the fourth time.

“Solstice is the most important event of the year in Valmiermuiza,” says Kake. “And during the whole event attracts huge amount of people of different generations. The total amount of visitors in this day is approximately 3000.”
Over the years, celebration in Valmiermuiza has become more and more popular and known not only in the nearest city and villages but in the whole region of Vidzeme. Every year the amount of local and international visitors has grown rapidly.

When asked why this event attracts so many people, Kake says: “I think that people appreciate the idea of this event – to put together those who want to celebrate Midsummer Day traditionally, according to ancestral traditions and find out even more information about them, and the ones who want to celebrate it in a bit more modern way. That is why in the event there are “school of Midsummer traditions”, workshops and fairs and also a concert of modern ethnic music and Latvian dances. So that people of different ages and interests can find something that would suit them best.”