“I am astounded by the naivety of many influential journalists” 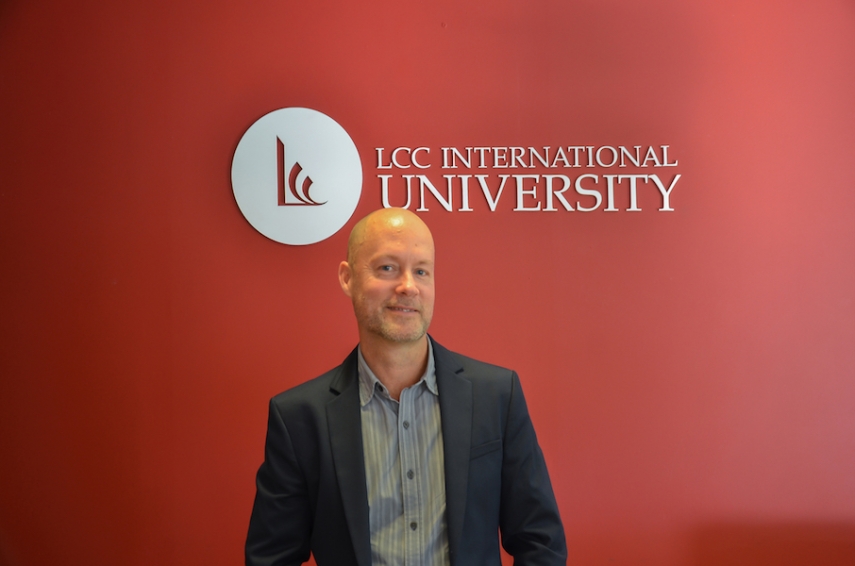 Having left Australia for Finland and, now, Lithuania, Mark Badham, an expert on corporate communication, wants his students at the LCC International University in Klaipeda to get interested in the new subject in the school’s curriculum and, in his personal life, continue to “stop and smell the roses” in hustle-and-bustle free Klaipeda. The Baltic Times sat down with the lecturer to find out more about his academic journeys.

It seems you had had quite a successful career in excelling Australian companies’ communications before setting off to Finland for a teaching job and, now, to a university in Klaipeda, Lithuania. What prompted you to leave the cozy life in Australia?

I had just sold a women’s magazine that my wife and I and two friends had launched in Australia about four years before. Suddenly the phone calls, emails and meetings stopped. Around that time my wife’s parents, who had moved to Finland for a few years to reconnect with their heritage, invited us to go and experience life in Finland with them. So we accepted. We just wanted a change of life and a change of pace. You mentioned “the cozy life in Australia”, and in one sense it was comfortable, but we had also been very busy. I had increasingly taken on entrepreneurial projects, like launching a travel business and helping friends start a new political party. Like many Australians living in big cities, my wife and I had been spending two to three hours a day in the car between work and home. So life in Finland appealed to us on many levels. We felt it would give us a chance to ‘stop and smell the roses’, as they say. And life in Finland did. I found myself doing a PhD and ghostwriting management and motivational books for leaders of some of the largest companies and organizations in Australia and Southeast Asia.

What do you find to be the most fascinating about teaching in different countries?

For example, for Finnish universities it is important to teach Finns to understand how corporations and governments may try to manipulate customers and citizens through communication practices and how audiences can resist and fight back. During the six to seven years living and working in Finland, I came to the conclusion that Finns believe corporate communication, marketing and advertising are mostly about ‘manipulation’ and coercion. Their moral and ethical compass informs them that no-one should practice any form of ‘manipulation’ or coercion over them. That’s my interpretation anyway.

This approach to communication is not unique to just Finland. In Australia, the USA and the UK, I believe that generally we have accepted that companies, politicians and governments are always going to try to convince us to do things, like buy products, sign up for new services, and vote for a particular party, through clever strategic communication tactics. We mostly accept it, I think, mainly because as a society we feel we have the confidence and capability to recognize when and how much we are being manipulated and we make our own decisions about accepting or resisting these attempts. So, when I taught corporate communication in Finland, I tried to make it clear from the beginning – to my university colleagues and to my students - that most corporate communication professionals in Western societies today focus primarily on helping companies and governments build mutually beneficial relationships with their target audiences over the long-term. When we do that, our communication strategies are built around ethical principles and practices. I believe that the dominant focus on a critical approach to communication, that was based on past ideologies and practices, should be toned down and that a new, more pragmatic, realistic and positive approach to communication would be more beneficial today. It would be nice to see communication courses steering students towards using communication to transform their societies for good. That’s what we are doing at LCC International University, actually. My critical communication scholars in Europe and Australia won’t agree with me on that. Critical scholars have a tendency to focus on the hidden evils lurking in boardrooms and halls of power. I would like to see university teachers and researchers focusing more on what’s good about strategic and corporate communication than what’s bad about it.

What do you believe set apart the best Australian universities from the top-tier universities in Finland, where you’ve spent six years?

I don’t think there is that much difference in quality between the best and most respected universities in Australia and those in Finland. There are certainly more of them in Australia because of the larger population. But I do feel that Finnish universities are starting to change tack in one important area. The top-tier universities in Helsinki, I notice, are increasingly trying to focus their research on meeting the real and practical needs of the corporate world. For decades, these universities have been funded very well by government, which had the effect on these universities not having much accountability to society or business. Now things are changing. Finland is facing serious economic challenges and finally university leaders are responding by building stronger ties to business to try to attract extra funds. But unlike governments, businesses don’t give out money without demanding short-term and long-term returns on their investment. So, these Finnish universities are increasingly trying to contribute their research efforts to help businesses, which in the end will help the Finnish economy and society. I haven’t been in Lithuania long enough to get a feel for how much universities here are collaborating with the corporate world.

By now you must have gotten an impression of Lithuania, your last stop, and LCC International University on its Baltic coast in Klaipeda, where you have started teaching corporate communication. What is it? How does it feel being in the Baltics?

The Baltics, and Lithuania, has had their share of suffering during the five decades of Russian occupation, which has left a strong imprint on the people’s conscience and worldview. How many years do you believe the Baltics will need to get rid of it? Do you see any remnants of the Soviet mentality and formation in your daily life in Klaipeda?

I haven’t been here long enough to make an informed judgment about people, life and work in the Baltic region. One of the courses I teach at LCC International University is Intercultural Communication, and my students are educating me about how history and religion has influenced the many various cultures in this part of the world. From what I have seen here, I get the impression that Lithuanians have deliberately not let the pain of the past affect them in a negative way. To use a nautical metaphor, which seems appropriate for Klaipeda where I now live and work, they seem confident in their ability to grab the wheel of the ship and to navigate independently towards a prosperous future. The younger generation of Lithuanians I am teaching indicate to me that they are much more forward-looking than perhaps the older generation may be. The past does not seem to have that much influence over their worldviews or keep them shackled in any way. I think that’s a very positive sign.

Amid the geopolitical tensions, Lithuania is very much concerned about Russian propaganda and staves it off with “white” propaganda through its media. Do you believe this is justifiable?

I do think that there is a lot of unfair paranoia about Russia that has been influenced by Cold War tensions that still have their tentacles in certain worldviews today. I am astounded by the naivety of many influential journalists and media commentators towards Russian influence over other countries’ elections and other political processes. These are people who have university qualifications and are in positions of great influence over public opinion, so they should take on more responsibility for the content, bias and tone of their reports and comments.

Any media-managed public discussions over ‘Russian influence’ should be more carefully deconstructed, examined and explicitly identified. For example, what do we mean by ‘Russian propaganda’? And who do we mean by ‘Russian’? The inference is that Russian political and government leaders are managing this influence, perhaps even Putin himself. But, it may well be that private interests are influencing public discourses. To be frank, powerful governments and corporations have been quietly influencing foreign citizens for decades. If members of the Russian government are proved to be doing this in recent times, we shouldn’t be shocked. Instead, we should corral all the guilty parties – including the USA, France, Germany and the UK - to try to introduce measures to reign in this unethical behavior. The blame and punishment should be equally shared. By the way, this is my opinion and not necessarily the view of LCC International University.

My PhD research is in the area of the news media’s influence over public discourse, and I am concerned at the mainstream news media’s irresponsible influence over what and how people think. You could argue that mainstream news media, particularly in the US and UK, have much more power in society than government leaders, and yet are not accountable to anyone in authority. The news media have a lot to answer for the growing divisions in worldviews between people. Anyone not sharing the dominant worldview dictated to us by respected, intelligent, educated journalists and commentators are ostracized and persecuted, which then forces them into a kind of underground and unorganized movement or a silent majority in some cases, which then results in events like Brexit and the recent US presidential election that shock these clever journalists and media commentators, who are certain they speak for the majority. The silent majority would call some of them bullies for blatantly pushing their worldviews onto the masses, but most I think are just plain naïve, which makes them very dangerous with a microphone in their hands.