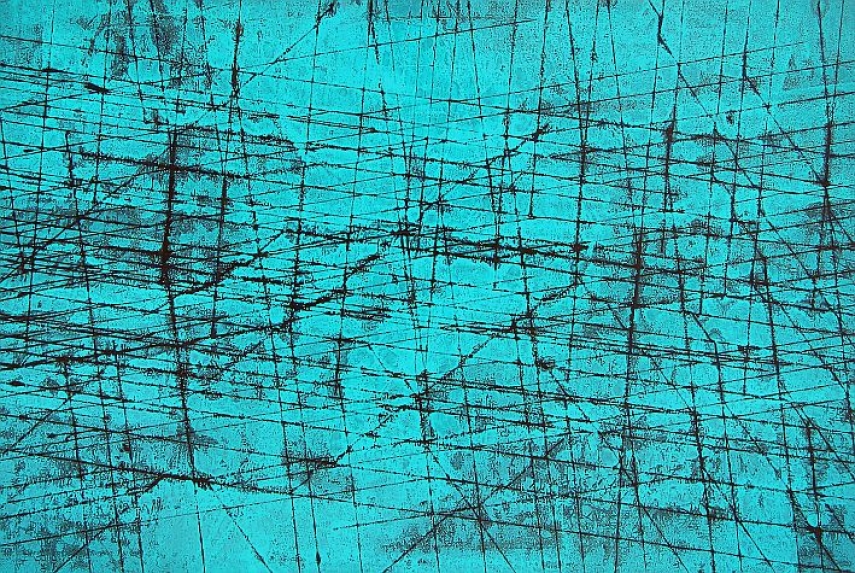 An exhibition ... and Flow... Jānis Murovskis... screenprint... will be presented in the 4th Floor Exhibition Halls of the main building of the Latvian National Museum of Art in Riga (Jaņa Rozentāla laukums 1) from 30 November 2019 to 26 January 2020.

The first impulse for this exhibition is a small photograph showing the reception of the delegation of the Latvian–Russian peace talks at Zilupe Station in 1920. On that occasion, Jānis’ grandfather, Jānis Jējers, returned from Moscow with the Latvian delegation, having been attached as a special forces officer.

“Grandfather-me-me-grandfather,” says Jānis Murovskis. The technique of the screenprint organically corresponds to his meditative worldview. It submits to the author’s will and flow of consciousness, adapts to the surface of the canvas or paper and, by its nature, provides coincidences as an impulse for the next move. Screenprint manifests the linear expression of paint flows, moods of contrasting or adjacent fields of colour. If one wishes, in screenprint it is also possible to give volume to a stroke, to find a texture modelling the form and demonstrating individual gesture. Even failure leads to a new beginning. Screenprint conceals a driving force and a distance, the opportunity to give time to observation and judge from aside without hurry, since each layer of paint takes time to dry.

The interplay with screenprint highlights the author’s Zilupe stations, dream lakes, which land upon being called by their real names. The interaction of words and images create associations with the sound of music, fragments of the vault of heaven and flashes of life circling in eternity.

Jānis Murovskis’ works can be counted among the phenomenological approach, since consciousness is just another phenomenon which is impossible to observe from outside – as observation itself is a state of consciousness.

“My freedom is my business,” says the artist, who signs his works succinctly MURIS.