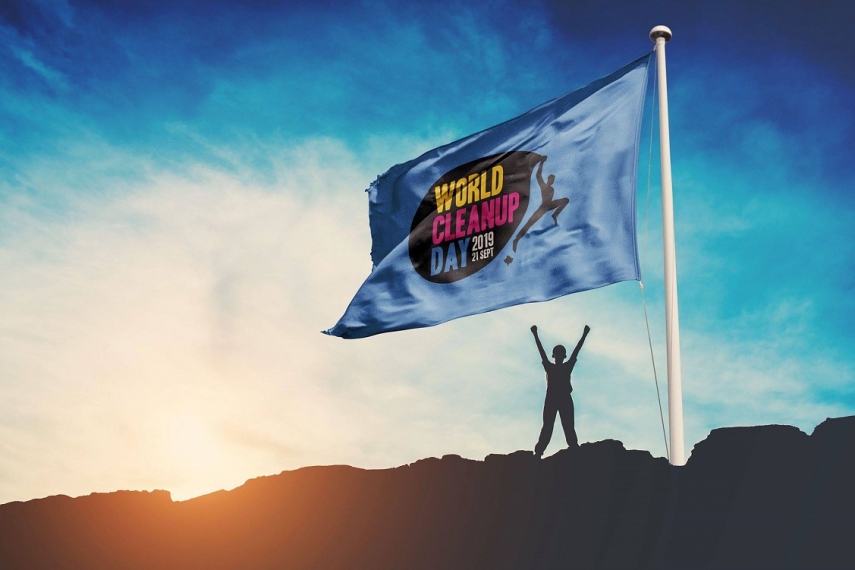 TALLINN - Around 20 million people in 180 countries and territories joined the World Cleanup Day campaign initiated by Estonia at beaches, streets, forests and parks in a global effort to clean up waste from public spaces and nature.

Compared with last year, participants in the World Cleanup Day in Estonia increased by threefold to around 28,038, organizers of the initiative told BNS on Wednesday. At least 333,000 liters of litter were collected in Estonia, including some 1.1 million cigarette butts, mostly by students and kindergarten children.

The event drew the largest number participants in Indonesia, which reported some 10 million volunteers, followed by Pakistan and the United States with 2.5 million and two million participants, respectively. The number of participants also increased by severalfold compared with last year in Cambodia, where 800,000 people came out to clean, while Bulgaria had their cleanup last weekend with 434,000 volunteers. 220,000 people took part in the effort in Iran, 300,000 in Brazil and 330,000 in Italy.

"It is humbling to see so many people come together for a goal that they all believe in and want to work towards -- a cleaner planet," Heidi Solba, president of Let's Do It World, said.

World Cleanup Day 2019 started on Sept. 21, Estonian time, in the Pacific island of Fiji and ended 24 hours later in Hawaii. Cleanups were organised in countries and territories on all continents, including the Arctic, where a group of cruise operators along with passengers put aside their binoculars, rolled up their sleeves and collected litter from the Arctic beaches to combat marine plastic pollution.

The usual suspect, plastic, was the main type of waste found on beaches across the world from Tonga to Bangladesh to Martinique. In Hawaii, the American singer-songwriter Jack Johnson led a cleanup that highlighted the amount of microplastic on the Hawaiian beaches. In Sri Lanka, 250 kg plastic and 15 kg of flip-flops were collected on just one beach.

Plastic waste made up most of the waste collected in Europe, too, but this year millions of cigarette butts found their way into trash bags and several countries chose to highlight the prevalence of cigarette butts on our streets and nature. In France, Italy, Belgium and the Netherlands cigarette butts featured heavily as well. Along with picking them up, the local teams educated the public through media on the harms of cigarette butts, that are often believed to be biodegradable.

Plogging -- picking up trash while jogging -- was another popular theme this year. Crown Princess Victoria of Sweden joined a plogging group in Sweden and running groups across the United Kingdom, Czech Republic and Netherlands among others chose this sporty way of picking up trash to participate in World Cleanup Day.

Despite a difficult security situation on the lead up to presidential elections in Afghanistan, a group of climate enthusiasts still organised a cleanup in Kabul. But they went further than just that -- they built a tower of all plastic collected and paraded it through the city to raise awareness of plastic pollution in the country.

Apart from political conflict and security, many countries had to reckon with the forces of nature. The biggest earthquake in 30 years hit Albania while 100,000 people were out in the streets and nature cleaning. Fires sparked by illegal land clearing in Indonesia spread haze across the country, but also Malaysia and Singapore, which meant many of the planned cleanups in the countries had to be cancelled or moved to different locations. Despite this, more than 9 million people came out to clean across Indonesia at least.

Cleanups also swept across the African continent and massive post-cleanup street parties complete with music and dancing echoed from DRC to Mozambique to Cameroon and Nigeria. While Africa and Europe were celebrating their successes, the Americas were about to start. Estimated 2 million people turned out to clean in all 50 US states and 5 overseas territories, led by the National Cleanup. Among other natural landmarks, the Hudson river in New York was cleared of some of the waste it holds. The Caribbean and Latin America saw people turn up to clean beaches, streets, forests and mountains. In Brazil, cleanups took place in 1,200 cities across the vast country while Argentina and Panama attracted sizable crowds following successful national PR campaigns.

World Cleanup Day is the largest single peacetime civic action against waste in human history, aimed at raising awareness of the scale of the global mismanaged waste crisis threatening the environment and the lives of millions of people and living beings.  Let's Do It World (LDIW), the organisation behind World Cleanup Day, is an international NGO headquartered in Estonia that tackles environmental challenges related to the global mismanaged solid waste problem by mobilizing millions of positive-minded people to participate in coordinated local and global actions. LDIW is aiming for positive change, smarter choices in design, production, consumption and resource management. LDIW has member organizations and representatives in over 150 countries.

As the cleanups happened, a live show with the latest results and news from various locations was broadcast live from Pristina, Kosovo, which hosted the global call-and media center this year.