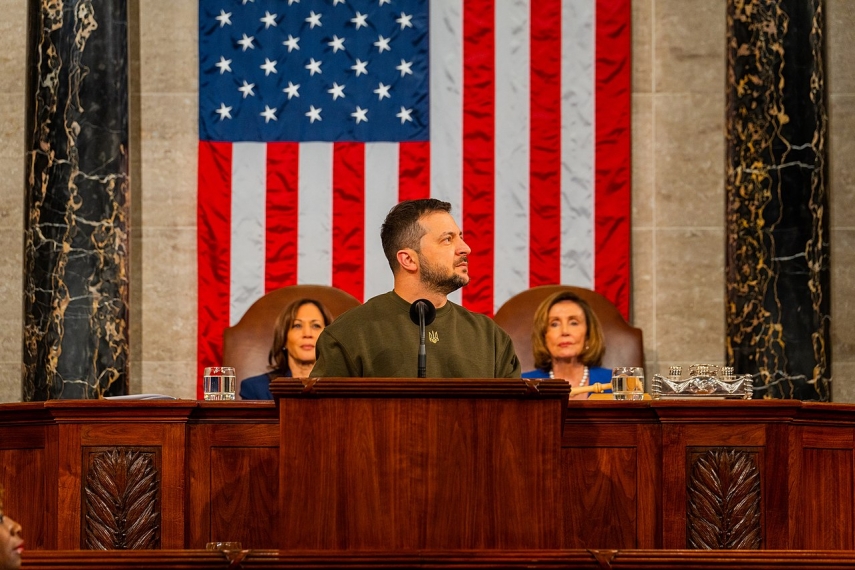 RIGA - Ukrainian President Volodymyr Zelensky's visit to Washington gives a clear signal that the collective West, led by the United States, sees Ukraine as a de facto part of NATO, according to political scientist Karlis Dauksts.

He told LETA that the visit of the President of Ukraine to the US is historically significant. It shows that the US sees Ukraine as defensible as closely as NATO territory would be. The political scientist noted that with this visit, Ukraine becomes an important member of the global strategy, while Zelensky is seen as a world-class politician.

When asked whether the visit of the President of Ukraine could accelerate and even increase the support given to it, Dauksts said that US President Joe Biden used Zelensky's visit as domestic political leverage against the US Congress. The political scientist explained that this was an important step, because the balance of power in the US Congress will change in January, and the provision of military aid could become more complicated.

"Zelensky's emotional and well-thought-out speech has undoubtedly contributed to the support of the US administration and Congress for Ukraine's efforts to regain its sovereignty and its borders. I think that Congress will not put any obstacles in the way of supplying weapons to Ukraine," said the political scientist.

When asked whether this visit could contribute to the admission of Ukraine to NATO in the future, also taking into account the fact that there are several risks associated with the country's admission to the alliance, Dauksts emphasized that the risks are clearly visible. Russian President Vladimir Putin recently visited Minsk, where it was proposed to deploy nuclear weapons on the territory of Belarus.

"The increasing rhetoric of the possible use nuclear weapons near the borders of Latvia, Poland and Lithuania has become 'fashionable'. Therefore, NATO is currently trying to look at the territory of Ukraine as a militarily strategically important element in its global positions," said the political scientist.

Dauksts also pointed out that the president of Ukraine is often criticized for asking for weapons, but now Zelensky is starting to be compared to former British Prime Minister Winston Churchill, who came to the US in December 1941 and addressed the US Congress in connection with the Second World War.

The political scientist pointed out that Churchill had one request made up of three words - arms, arms and arms. Therefore, in Dauksts' view, comparing Zelensky with a beggar for arms is neither justified nor adequate, since Zelensky is defending his country in the diplomatic field.

The AFP news agency writes that Ukraine's president thanked "every American family" in an emotional but defiant address to the US Congress Wednesday aimed at countering growing skepticism over US military aid as Kyiv's war with Russia drags into the new year.

It was Volodymyr Zelensky's first overseas trip since Moscow launched the full-scale invasion on February 24, a ruthless offensive that has upended the global economy and led to widespread destruction and death.

"On this special Christmastime, I want to thank you, all of you. I thank every American family which cherishes the warmth of its home and wishes the same warmth to other people," he told lawmakers who had given him a lengthy standing ovation as he walked into the House chamber.

The conflict has begun to recede from the headlines in the United States, with no end to the fighting in sight and Republicans who take over the House of Representatives in January showing signs of weakening resolve.

In what was billed by US media as the most important speech of Zelensky's career, he told a joint meeting of the House and Senate his country would never surrender, adding: "Ukraine is alive and kicking."

But he urged lawmakers -- many of whom were dressed in the blue and yellow of the Ukraine flag -- to do more for his nation through the brutal winter months, pleading for more weapons and financial aid.

"We have artillery. Thank you. Is it enough? Honestly -- not really," he said in a frank moment that pierced what had been an upbeat atmosphere, with his words accompanied by several outbursts of spontaneous applause.

Discussing his visit Tuesday to the war's southeastern front line, Zelensky presented lawmakers with a Ukrainian battle flag signed by soldiers from the besieged city of Bakhmut.

Zelensky thanked politicians from both parties but his appearance was also calculated to counter fatigue for the war, particularly among isolationist Republicans who have voiced doubts over the continued flow of tax dollars to Kyiv.

Congress is poised to pass USD 45 billion in additional military and economic aid to Ukraine this week as part of its $1.7 trillion annual funding bill, bringing total US assistance to over $100 billion.