We are living in cold war conditions, with the EU on one side and Russia and Belarus on the other - MEP Kalniete 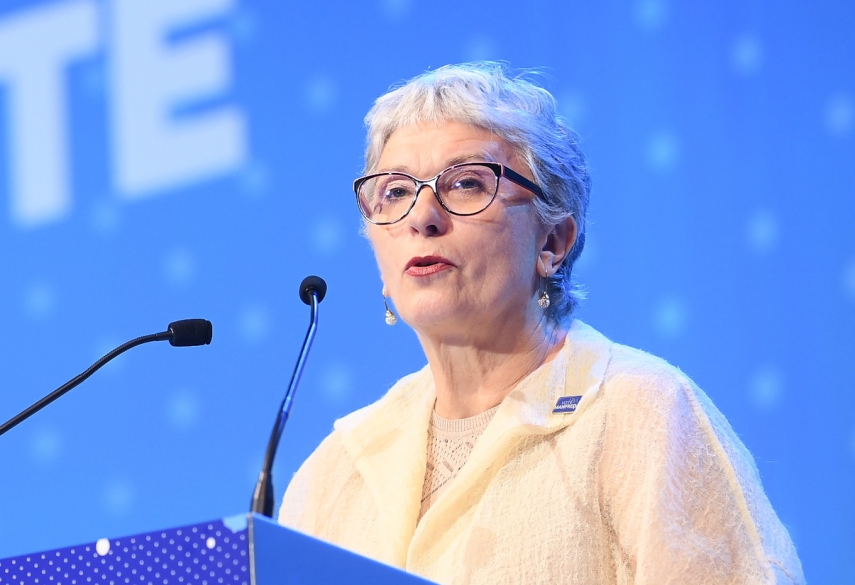 RIGA - We are currently living in cold war-like conditions, where the European Union (EU) is on one side and Belarus and Russia on the other, Sandra Kalniete (New Unity), Member of the European Parliament (EP), told LETA.

The President of the European Commission (EC), Ursula von der Leyen, has stated that, despite the requests of several Member States, Brussels will not allocate funds for the construction of fences at the external borders of the bloc to stop illegal migration flows.

In Kalniete's opinion, Leyen's statement reflects the rhetoric that has continued since the fall of the Iron Curtain. The Iron Curtain symbolically separated the free world from the socialist regime. The politician admitted that it is difficult for some Western politicians to understand that a fence is not only a barrier, but at the same time a means of protection against hostile regimes.

"What is currently happening on the EU's eastern border is an expression of a hybrid war that the EU must defend itself against. The call by the 12 EU Member States - Austria, Bulgaria, Cyprus, the Czech Republic, Denmark, Greece, Hungary, Estonia, Latvia, Lithuania, Poland and Slovakia - for EC funding of border infrastructure shows that we are not alone in realizing that we must protect ourselves and our people not only with beautiful words but also with deeds," the MEP emphasized.

Regarding whether the EP supports the call of these member states, Kalniete pointed out that there are political groups that support it, and it is mainly the group of the European People's Party (EPP), while opinions are divided between the "Greens" and the "Socialists", because the position on this issue is largely dictated by the nationality of the members.

"I am very pleased that Manfred Weber, President of the EPP Group, has given his unequivocal support. It is important that the largest political group in the EP has a pragmatic understanding of both the fact that the times have changed and what is needed to strengthen Europe 's borders," said the politician.

Asked what are the possibilities for Latvia to receive assistance from the EU in solving the migration crisis, Kalniete emphasized that it has several aspects, because the construction of the border is only one of the elements. Latvia has received assistance from the EU border guard agency Frontex, and will also receive funding for humanitarian aid to meet the needs of people who nevertheless arrive in Latvia.

"I think it will take extra pressure and time, although no country can wait for long in a hybrid war. Therefore, the border needs to be strengthened now, and as the EU changes attitudes and awareness, it will decide whether to reimburse the costs of building border infrastructure. At present, no one can say whether part or all of the funding will be reimbursed," said the MEP.

Regarding the EU's involvement in solving the illegal migration crisis, Kalniete noted that flights from Iraq to Belarus have been suspended until next year, and the EU External Action Service is actively working to suspend flights from other countries, mainly from the Middle East, as well as from Libya and Syria.

"But it is even more important to introduce sanctions that would restrict the ability of European airlines to lease their aircraft to Belarus for such flights. Sanctions should also be imposed on the Belarusian national airline Belavia. Although it is not directly involved in this process, it is necessary to think about how to narrow Alexander Lukashenko's ability to maneuver," said Kalniete.

According to her, restrictions against Belavia airlines should have been introduced as soon as the Ryanair flight was forced to land in Minsk on the way from Athens to Vilnius in May. The politician emphasized that this was an act of terror perpetrated by Belarus - hijacking a plane, forcing it to land in Minsk to arrest Roman Protasevich, the founder and former editor-in-chief of the Belarusian opposition media Nexta.

The MEP emphasized that both the EC and the EU Council is taking this seriously, as evidenced by the agreement and joint letter of the Foreign Ministers of the 12 EU Member States calling for financial support for the development of border infrastructure. Kalniete also pointed out that several EC commissioners who have visited the border and seen what is happening there understand the situation very well and have made recommendations for financial support.

According to politician, the most important thing is to continue negotiations on the suspension of flights from countries from which illegal migrants arrive in Minsk. Kalniete also noted that work is currently underway on the preparation of the fifth package of sanctions against Belarus, which will mainly include those individuals and companies that are conducting this illegal migration, and this is also an important means of influence.