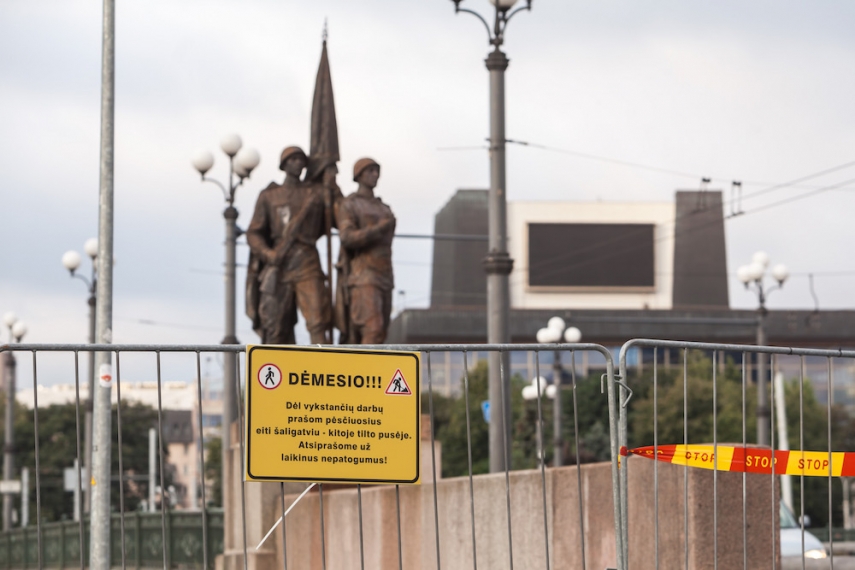 The removal of the Soviet statues from the Green Bridge has started [Image: Vilnius Municipality]

The four statues were placed on the Green Bridge in 1952 during the second Soviet occupation of Lithuania. They represented Soviet Red Army soldiers, workers, peasants and students.

On July 19, 2015, the removal of the statues began after a recent decision was taken by Vilnius municipality earlier in the month. The first two statues were removed overnight between July 19/20.

Mayor Simasius explained to journalists on July 20, that the decision to remove them had been based on the interests of public safety, rather than political motivation.

When asked whether he was happy the process to remove the statues from the Green Bridge had started, Simasius replied: “Yes, of course I’m happy for two reasons.

“Firstly, and this is the main reason, is because pedestrians are safe now.

“The statues were very dangerous for passers by because their condition was very poor,” he continued. “We had no other choice to remove them from the Green Bridge.

“According to expert advice, we would have had to have closed the pavement [by the statues] during strong winds, because they would have made it too dangerous to pass by.

“There was also a big debate of the principles and values behind the statues. For me personally, I think the values the statues represent were actually big lies about the Soviet system. Nothing more, just big lies.”

The mayor also explained a decision surrounding the fate of the statues had not yet been taken, and would be discussed during the Autumn.

“We are not discussing the fate of the statues yet due to their cultural heritage.

“They will be guarded, then during the Autumn we’ll bring everyone to the table to have a discussion and decide whether they will be used temporarily or permanently in the future.”

Those who support the removal of the statues believe they are examples of Soviet propaganda, and act as an insult to those who fought for the Lithuania's eventual liberation from the Soviet occupation in 1991.

Opponents of the decision believe the sculptures are an integral part of the bridge, and have accused the Simasius administration of pursuing a populist agenda.