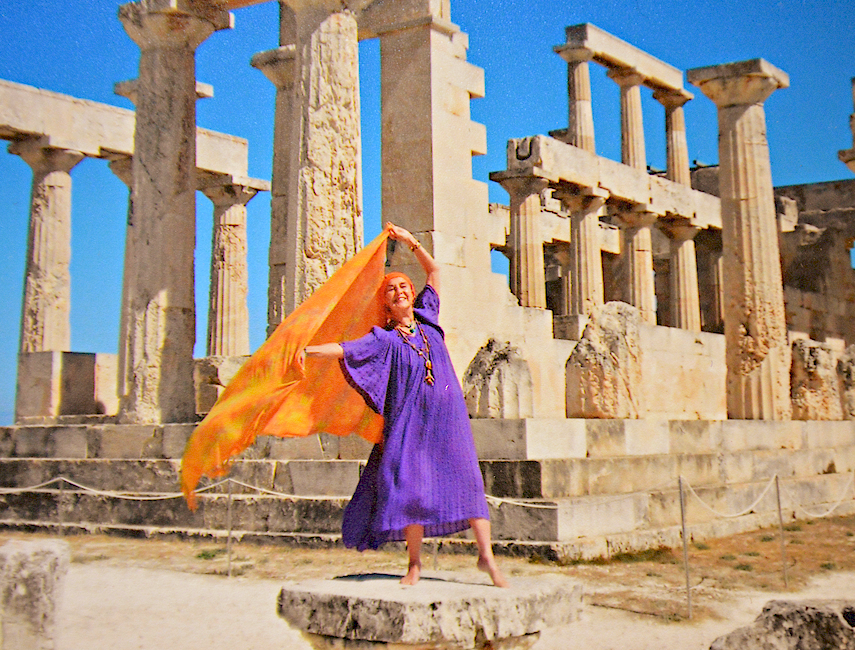 DANCING QUEEN: Vija Vetra shows her flair at an Aegean temple she has declared her own.

RIGA - Vija Vetra, who turned 92 this year, is a true example of an artist who has lived her passion for dance her entire life. She has returned to Latvia for what may be the last time.

Like the first breeze of summer, Vija Vetra has wafted back to Latvia every year since 1990, teaching master classes all over the country, putting on anniversary dance shows, and renewing her energy.
“I have spent 51 years in America, but I haven’t put down my roots yet,” she explains. “New York can be so impersonal. I come here to get new energy, and be reborn,” she continued.

Throughout her life, Vija Vetra has been many things, had her own TV shows, books, films, documentary movies and more. She has been greeted by royalty and is the recipient of the Order of the Three Stars for her meritorious service to Latvia. Vetra was also revered by poet Imants Ziedonis, who told her she “danced Latvia to freedom”. She also helped bring the Unitarian Universalist Church into Latvian in 1993, including offering dancing services.

Her fame and passion for life were further fueled by her fight for survival in World War II, when, while practicing dance in the Vienna Academy, the building was bombed and collapsed on the class. Vija and her classmates had to be shoveled out.
“I have known fear, I have known hunger,” she remembers, “The sky at that moment had never looked so blue; right in the line between life and death.”

She was fortunate to catch the last refugee train out of Vienna to the West for temporary refuge in the displaced person’s camps. From there, she sought asylum in Australia, where she struggled to balance her passion for dance with her work in a local hospital to pay off her debt for being granted asylum in Australia.

It was in Australia that she was introduced to Indian dances, those which she became most famous for, even giving a command performance for Queen Elizabeth.
“I have often felt as though I am continuing the work of a past life,” she says, both about her work with Indian dances, as well as her shows in Greece, where she found, what she considers to be, her temple on one of the Aegean Islands. When dancing in India, she was given the Sanskrit name Vijaya, meaning ‘victory’, and toured with the Ram Gopal Dance Company. Most astounding for the Indian audience, was that, in the beginning, she learned dance by emulating the movements of temple sculptures and statues.

Despite her flair and passion in colorful dance, Vija Vetra leads a simple life, with sparse furnishings in her Greenwich Village apartment, where she also paints and creates artwork from objects not traditionally incorporated into art pieces. “I use what others might simply throw away,” she explains.

Her secrets to longevity? Movement and dance. “Movement is key, and dancing is the best kind of movement. It is important for everyone as it has an emotional side, more so than sports. We satisfy our emotional world, our duality. Both spiritually and physically,” Vija explains. She also emphasized the importance of remaining child-like throughout one’s life.  “Although, it is important to be child-like, not childish,” she clarifies.

Her diet, much like her life, is also simple. “I eat plain meals, mostly stewed colorful root vegetables, fruits, and salmon,” she says.

This month, Vija Vetra will be teaching at the University of Latvia Academy of Sciences in auditorium 305, through the Akvilona Health Centre, about her very secrets to longevity and an active life. Her lecture on 07 July at 18:30, will touch on “Movement as Origins”.