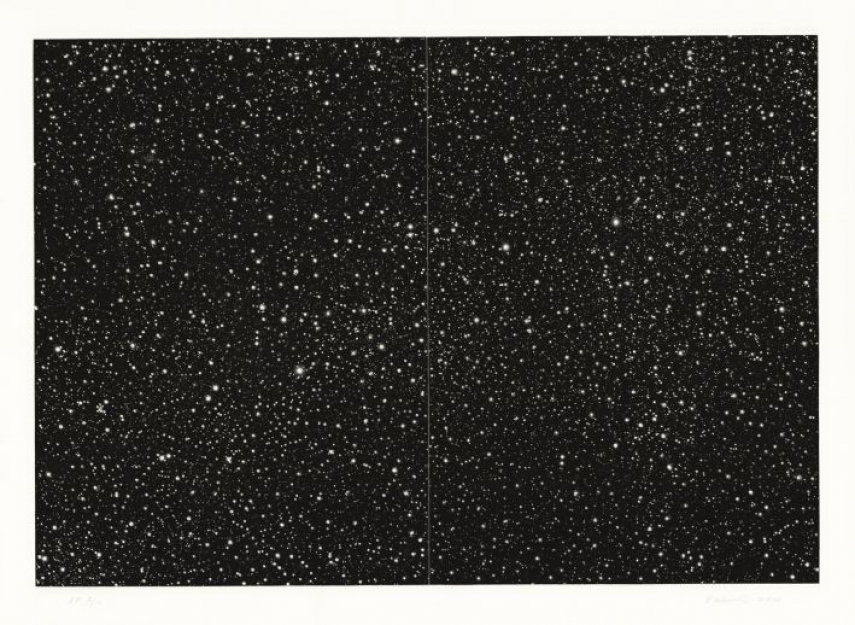 An exhibition Vija Celmins. Eleven Works and a Film will be on view in the Cupola Hall of the main building of the Latvian National Museum of Art in Riga (5th floor; Jaņa Rozentāla laukums 1) from 30 January to 25 March 2018.

In 2018, the art world of the USA marks Vija Celmins’ eightieth birthday with several major exhibitions. Simultaneously with the exhibition at the Latvian National Museum of Art (LNMA), Vija Celmins’ works will be shown in Matthew Marks Gallery in Los Angeles (27 January – 31 March 2018). In December 2018, the biggest exhibition of the artists’ oeuvre to date will be opened in the San Francisco Museum of Modern Art and will travel to the Metropolitan Museum of Art in New York in 2019.

The artist’s major retrospective in Latvia took place in the year of her 75th birthday in 2014 at the Art Museum RIGA BOURSE. This year, the year of the artist’s 80th birthday, the Latvian National Museum of Art wishes to acquaint its visitors with all Vija Celmins’ works in the museum’s collection, highlighting each as a unique jewel. These are eleven print sheets, the first of which was acquired by the museum in 1998, while the remainder – starting from 2012, when a fruitful and mutually interested collaboration with the artist was established. The museum has never previously exhibited all of these works together. Five of the works in the collection have been presented by the artist, among them, two works of her so-called ‘new period’ acquired in 2017. These are sheets made in the techniques of mezzotint and drypoint fixing the surface of the ocean.

The fact that the ‘subjects’ in Celmins’ work have remained the same over her lifetime brings up the question of the conceptual nature of such a choice. The water in the ocean, the stars in the sky, the sand in the desert, the stones on the earth – these material elements are too immense to be contained within the frame of a single composition. Therefore, the artist uses an all-over approach covering the entire surface of the work with the image while the ‘full picture’ extends beyond the work of art, it has to be grasped with ‘the third eye’ or ‘the sixth sense’.

The surface of the ocean, the starry sky, a spiderweb, the world map, the postage stamps with Saturn shown in the works in the collection of the LNMA can also be seen as very boring motifs where nothing happens. But the essence lies in searching for differences, noticing nuances, the sharpening of the viewer’s attention, awareness. The observation of Celmins’ works is similar to an exercise in meditation.

Celmins’ work Tablets #15 (2017) is displayed in the exhibition YOU’VE GOT 1243 UNREAD MESSAGES. The Last Generation Before the Internet. Their Lives which takes place in the Great Hall of the LNMA until 4 February. It shows the artist’s working method of the last fifteen years – the imitation of found objects. The artist makes the blackboard tableau works as sets, exhibiting side by side both the found tablets used in former times and the new ones made by the artist repeating all the effects of aging – scratches, dirt, scuffs. The same method is used for the work Amérique (2009/2010), part of the LNMA collection, which was made after a Belgian map from the 19th century found in an antique shop. Behind each 19th–20th century artefact that has captivated the artist there is a page of history of the pre-Internet era and the gradually disappearing, thorough manual work of the craftsman.

The Latvian-born American artist Vija Celmins has had a fascinating career. Vija Celmins was born in Riga on 25 October 1938. In 1944, at the age of six, she left her native Riga and went into emigration. In 1948 she came to the USA and in 1949 settled in Indianapolis. When in 1962 the artist began her studies at the University of California (Master of Fine Arts, 1965), she moved to Los Angeles, where she lived and worked till 1981, when she left for New York and convincingly established her place in Western art world. Vija Celmins’ works are held in the most significant collections of contemporary art in the world – Museum of Modern Art in New York, Whitney Museum of American Art, Metropolitan Museum of Art, Centre Pompidou in Paris, Tate Gallery in London and others.