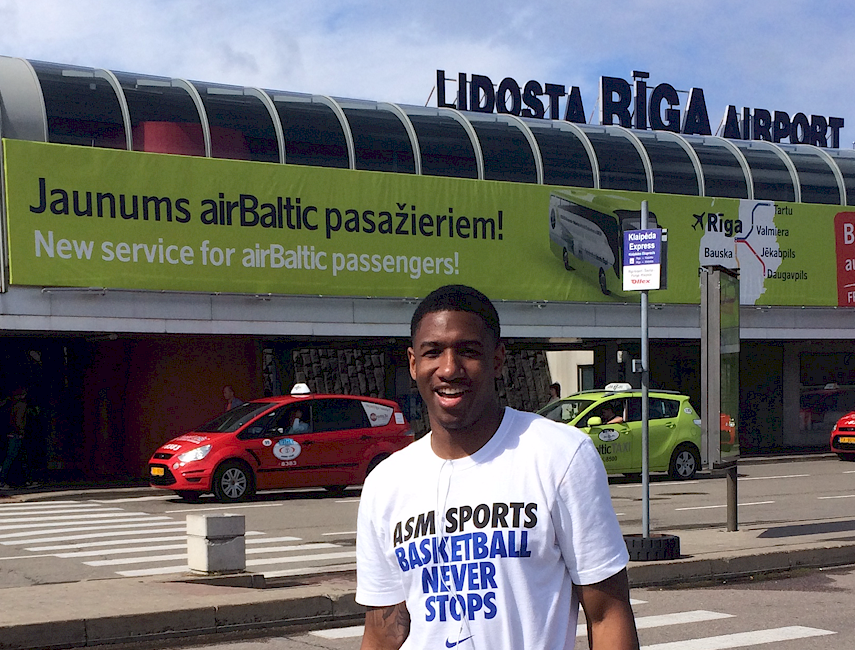 American athletes: they keep coming to Europe, like it’s a best vacation spot on the planet Earth. Mostly they arrive to spend a season, playing basketball for one of the countless clubs all over the Europe. Then, like traveling salesmen, they move to the other city and start all over again. VEF Riga’s top trailblazer this season has been American point guard Gerald Robinson. After graduating from Georgia University back in 2012, this 26-year old began his professional career one year later in Israel.

After an unsuccessful attempt to land a spot on the NBA’s Memphis Grizzlies team through summer league, Gerald Robinson signed on with the best Latvian club in August of 2014. Despite averaging a respectful 18 points and dishing out a blistering 5.2 assists per game, “G-man” as he is known around the team, couldn’t lead VEF to the United League Playoffs this season. Nonetheless, it was pretty interesting to talk with Gerald about this season as well as about his perspective on living and playing basketball in Riga.

-Where do you think you guys lacked as a team to make the playoffs this season?

-It has to be focus and concentration, because too many times this season we were ahead by double digits in the second half and ended up losing the game. But, the game is played for 40 minutes and I think too many times we played the game for just 35-37 minutes. That’s because the youth and inexperience of our team. If we played a complete game, we would have had a different season, for sure.

-Being a guard in modern basketball, you’ve got to do it all: set up your teammates, score the ball, be a vocal leader. What do you enjoy the most?

-I don’t single out any one of those things; I really just enjoy playing the game. It’s something I’ve been doing my whole life for free, so it’s like a safe haven for me, it’s kind of like my form of art, my craft. I just enjoy being out there on the court, performing.

-Who were some of the NBA players you looked up to growing up?

-When I grew up I was a big Tracy McGrady fan. We are different in size, but I always liked his game, how cool he was on the basketball court. Before his injuries Tracy was one of the best scorers in the league. But in my opinion he was one of the better players too. Also I admired Penny Hardaway, who’s from the same home state as me – Tennessee.

-How hard is it for a smaller guard, like you, to make it in a professional basketball, dominated by big players?

-Even though you don’t have the same height as some of the bigger guards, basically you just got to do more things. When you have height you can be good or even great in one thing, when you are small, you just got to have this extra effort, do more during the basketball game.

-To make an NBA team - is it still a dream of yours?

-Yes, for sure. And it’s not out of reach at all. As of right now, my goal is continuing to get better as a player in all aspects of the game. And if I get the opportunity for NBA roster I would take it.

-You’ve played almost the whole season for VEF now. So, what do you like and don’t like about living and playing basketball in Riga?

-There is nothing that I don’t like because of my personality. I’m very versatile person and I can adjust to anything, so the only complains about being in Riga would be the weather. I’m not really big fan of cold weather, but other than that, everything was fine. The city is nice and it has everything that I might need staying abroad, like American restaurants for example. It also has some other extracurricular things you can do, off the court, like cinema or aquapark. So, if you want to do thing, there are things to do around city and if you don’t, you can just sit around the house and watch movies, like me. I do step out occasionally to venture out and explore a little bit.

-Any landmarks in Riga you liked in particular?

-Not really. I like architecture in general and in Europe and here in Latvia they have a lot of really beautiful towns with nice buildings and stuff. But, as far as Riga, other that the Freedom Statue, I don’t really know much about any landmarks. I didn’t do much sightseeing.

-Who would you pay your own money to watch perform among modern athletes, not just in basketball?

-My favorite athlete in general now would be Usain Bolt. I’m really big fan of him; I like how he carries himself, how he competes. I wouldn’t race with him, though. Maybe form the baseline to the free throw line, where he won’t be able to use his long strides. But on the 100 meter dash, when he picks up his famous speed – forget it. He’s very artistic when he flows like that.

-Gerald thanks for your time. I wish you to crack NBA roster in the near future.

-Thank you, I appreciate it.