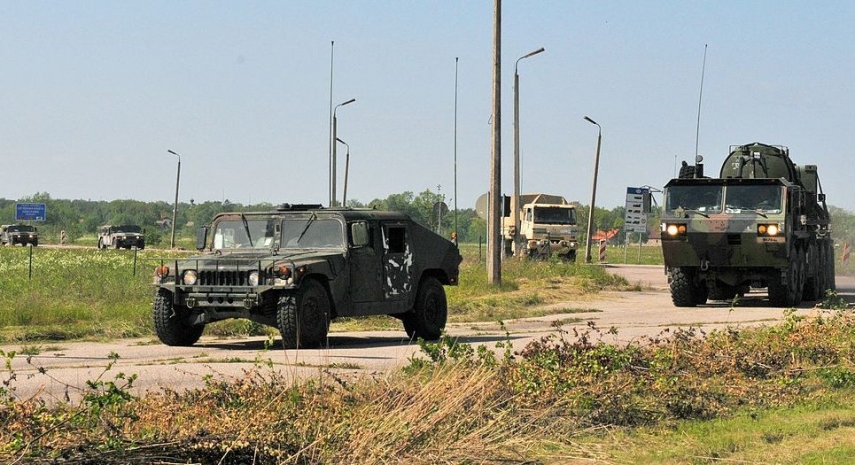 TALLINN - A member of U.S. President Donald Trump's National Security Council (NSC) staff came up with an idea in February 2017 to pare back American troops in Europe, and to withdraw completely from the Baltic countries, as an overture to Vladimir Putin, the U.S. media portal The Daily Beast reported.

While the proposal was ultimately not adopted, it is the first known case of senior aides to Donald Trump seeking to reposition U.S. military forces to please Putin -- something that smelled, to a colleague, like a return on Russia's election-time investment in President Trump. The White House did not immediately respond to The Daily Beast's request for comment.

Kevin Harrington, a deputy assistant to Trump for strategic planning, mused in February 2017 about withdrawing U.S. troops close to Russian borders as part of a strategy proposal to "refram[e] our interests within the context of a new relationship with Russia," the former official told The Daily Beast.

Harrington is the NSC's senior official for strategic planning. He had neither military experience nor significant government experience before joining the White House. But he had an influential credential: As a managing director for the Thiel Macro hedge fund, he was close to Trump patron and ally Peter Thiel. Trump's first national security adviser, retired Lt. Gen. Michael Flynn, announced Harrington's arrival in early February as part of a "talented group" ready to bring "fresh ideas to the table."

Among Harrington's ideas were a fervent belief that economic sanctions, particularly those on Russia, were ultimately harmful to the United States. Early on in his tenure, Harrington prepared a paper for Flynn fleshing out those ideas into something approaching a grand strategy -- and then going further than any gesture toward Russia thus far reported.

With a large map showing Europe hanging on a wall in a White House office, Harrington was dismissive of U.S. interests in the Baltics and wondered aloud about their importance in the context of U.S.-Russian relations.

Harrington's former colleague told The Daily Beast that Harrington asked about the prospect of withdrawing or repositioning U.S. forces from the Baltics.

According to the ex-colleague, Harrington considered it a gesture to the Kremlin that would enable the nascent Trump administration to see if its desire for a friendly relationship with Russia would be reciprocated. It was included in a strategy paper that, conspicuously to the former official, made no mention of Russia as either a competitor or adversary.

The ex-colleague considered the idea dangerously naive. The Kremlin was far more likely to view a unilateral U.S. troop reduction from Eastern Europe as a green light from Washington for additional provocations, in Ukraine, Syria, or elsewhere. If that wasn't enough, European allies were already alarmed at Trump's tendencies to discuss the defense of Europe as a protection racket. Seeing the new administration pull back from Europe would prompt fear on the continent, and especially within the Baltics, that the U.S. was abandoning its allies to a resurgent Russia.

"I sensed we were giving something and it wasn't clear what we were gaining in return," said the former official.

A second former senior Trump administration official told The Daily Beast that Harrington had enthusiastically discussed this proposal with several senior staffers, including ousted White House chief strategist Steve Bannon, another Flynn ally. This source noted that Harrington's proposal was largely politely brushed aside, even at the uniquely chaotic early days of the Trump era.

"I [personally] did not take it to the president because the White House is the leakiest ship possible and can you imagine how that would have looked," the former administration official stressed.

The source could not confirm if anyone else had brought the proposal to President Trump.

The former administration official who told The Daily Beast about Harrington's proposal was incredulous that anyone on the NSC would treat U.S. forces and European allies as chess pieces in a greater game with the Kremlin. But the ex-official chalked it up to geopolitical inexperience and an enthusiasm for policy revisionism that characterized several on Flynn's NSC.

Nor was it Harrington's only foray into unilateral gestures aimed at Russia. In March, Harrington proposed lifting U.S. sanctions on Russian oil, something an administration official justified to The Daily Beast as Harrington wondering, "if these sanctions are harming our economy without putting any pressure on Russia, what's the point?"

In February, however, at a public forum, Harrington denied that the administration was looking to lift sanctions on Russia, saying "it's smart to look at things from fresh angles, as it's a fresh administration, but that doesn't mean you should drop things for no improvement in behavior anywhere."

In mid-December, The Washington Post reported that Harrington viewed U.S. closeness with Russia "as critical for surviving an energy apocalypse," something his associates, the paper reported, said Harrington "discussed frequently and depicted as inevitable."

Harrington continues to be a member of the NSC.