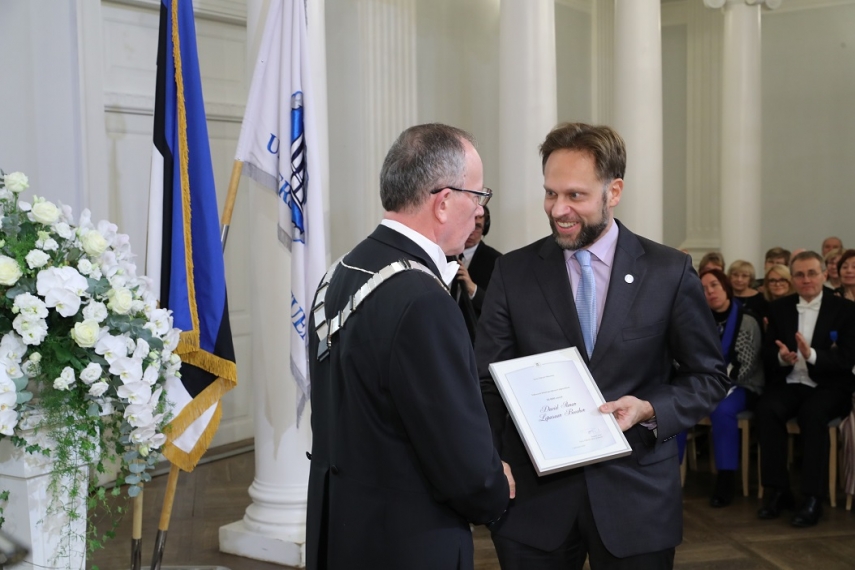 At the ceremony dedicated to the 100th anniversary of Estonia’s national university, the University of Tartu’s first scholarship for visiting professors from the Estonian Diaspora was presented to David Ilmar Lepasaar Beecher, a lecturer of history and global studies at the University of California, Berkeley. David Ilmar Lepasaar Beecher is a historian and social scientist of Estonian descent, a lecturer with nearly 20 years of teaching, supervising and curricula development experience from the universities of the United States of America and Europe.

The scholarship was presented at the anniversary ceremony by Rector of the University of Tartu Toomas Asser, who said that the university with sincere gratitude accepted the gift of the Estonian diaspora, the scholarship that supports bringing top-level researchers of Estonian descent to Tartu. According to the rector, it is pleasant that several highly recognised people from the world of research, whose presence would enrich the teaching and research here were submitted for the first scholarship of the Estonian diaspora. “David Ilmar Beecher won the unanimous support from both students, faculties, and members of the expatriate Estonian community,” said Asser. “Moreover, during the application process he presented a very thorough action plan for enhancing the international visibility of not only the university but also of the city of Tartu.”

Beecher, who received the 50,000-euro scholarship, was happy for the great opportunity to mediate the relationships between Estonians here and abroad as a visiting professor at the University of Tartu. “What makes me particularly happy is the opportunity to stay here longer to experience the spirit of Tartu and to make my contribution to it. I hope to do it as a researcher of the complex linguistic identity of the University of Tartu throughout history, and on the other hand, as a professor interpreting the complex relations between Europe and Russia, and the meaning of nations and empires in a globalising world.  I also hope that conversations with people from different institutes and institutions of the University of Tartu will lead to collaboration, organising events and maybe even a museum exhibition,” said Beecher.

Beecher’s main research focus is the cultural and intellectual history of Europe and Russia, particularly in the 19th and 20th century. Four central themes emerge in his research: languages, universities, towns and states. His doctoral dissertation “Ivory Tower of Babel: Tartu University and the Languages of Two Empires, a Nation-State, and the Soviet Union” won the Friends of Cal History Dissertation Prize at the University of California, Berkeley in 2015.

This scholarship enables the visiting professor to do research and teach at the University of Tartu Johan Skytte Institute of Political Studies from September 2020 to June 2021. In the next academic year, Beecher will teach two comprehensive lecture courses, “Nation-states, Empires and Globalisation” and “Europe and Russia since 1848”, which are interesting for students of various curricula. He also plans to publish a monograph written on the basis of his doctoral dissertation, in which he emphasises the meaning of the University of Tartu – the most European university within the sphere of influence of Russia during four centuries – and deals with the development of the University of Tartu in the context of different regimes, various linguistic and cultural influences.

In addition, David Ilmar Lepasaar Beecher helps to introduce, primarily in North America, the English-taught programmes of the University of Tartu Faculty of Social Sciences, and to make and maintain contacts with Estonian expatriates.

Why does Lithuania stand out as Belarus’ staunchest ally?