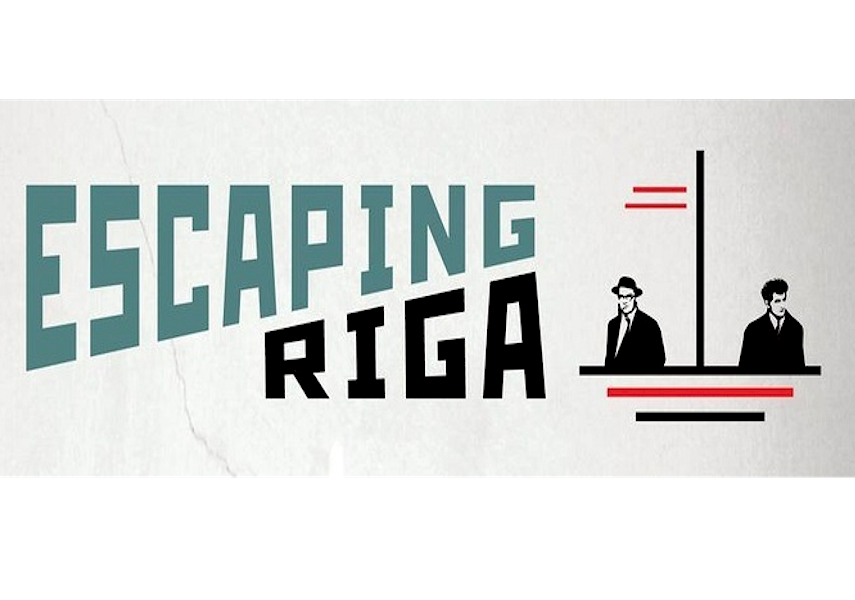 KAUNAS - The Latvian film director Davis Simanis’ quasi-documentary Escaping Riga (2014) allows a standpoint from which to deal with the intrinsic logic of the twentieth century. Modelled after what we may well call the “mockumentary” (in terms of cinematographic language, it bears family resemblance to Woody Allen’s masterpiece Zelig), this film deals with two people of genius. Both were born in Riga. Both had turbulent lives, though they lived in at once two drastically different political settings, and even in two opposing and irreconcilable civilizations. Both had their Jewish connection enriched by the Baltic – and primarily Latvian – flavour. Both risked their lives participating in the dramas of the twentieth century. Both achieved fame. The two people in question, masterfully portrayed in Simanis’ film, are the British political theorist and historian of ideas Sir Isaiah Berlin, and the Soviet film director Sergei Eisenstein.

Sir Isaiah Berlin (1909–1997) was born in Riga. A perfect speaker of Russian, he was from his youngest days onward interested not only in Russian culture but in the ideas and history of the Baltic region as well. After becoming a world-famous theorist and historian, he continued his preoccupation with that region’s greatest thinkers: Immanuel Kant, Johann Gottfried von Herder, and especially the man who inspired the latter, Johann Georg Hamann. Hamann was born and lived in Konigsberg, died in Munster, and was held to be a genius by his contemporaries who called him the “Magus of the North”. Berlin‘s interest in Hamann (whose friendship with Kant did not prevent him from being one of his great opponents and who considered emotions to be more important than reason) was most likely behind his theoretical attention to a phenomenon he called the Counter-Enlightenment. Berlin associated the latter with two thinkers whose brilliance was recognised in Europe only belatedly, if at all: Hamann and Giambattista Vico.

The scope of Isaiah Berlin‘s works is immense. They include books about great epochs of European thought and culture, the Renaissance and the Romantic Age; about Russian thinkers and writers; about Niccolo Machiavelli, conceptions of freedom, liberalism, nationalism, European conflicts, and the quest for peace. He was both a thinker and political actor. To be an active diplomat and public figure and then to immerse himself in the life of Oxford University and create new institutions and research programs there was as natural to him as to move from one subject matter to another. There are quite a few studies about Isaiah Berlin’s connections to the greats of Russian culture – from Anna Akhmatova to Andrei Sakharov.

The Baltic region is usually associated with late Romantic and neo-Romantic movements, and with conservative nationalism in particular. That‘s a cliche. It should be sufficient to recall the great liberal thinkers from that region – Immanuel Kant, Johann Gottfried von Herder, Paul Schiemann, and Isaiah Berlin in order to grasp the fact the Baltic lands gave the world many more prominent representatives of modern liberalism than other similar-sized European countries have. By the same token, Isaiah Berlin and Paul Schiemann are among the ranks of those 20th-century thinkers who remained non-indoctrinated, antitotalitarian and did not succumb to hatred: a list that includes Hannah Arendt, Karl R. Popper, Leszek Kolakowski, Czeslaw Milosz, Alexander Shtromas, and Tomas Venclova. As we can see, most of them have ties to the Baltics.

Things were different with Sergei Eisenstein (1898–1948). Born into the family of German-Jewish father and Russian Orthodox mother, Sergei departed from his family’s initial trajectories of faith. A Russian Orthodox believer in his childhood, Sergei became an ardent atheist; unlike his father, who was a staunch supporter of the Whites, he was to become a brother-in-arms to the Reds. A great cinematic innovator, Eisenstein is widely and justly regarded as the father of the montage technique, one pivotal for the art of cinema.

He was not entirely different from his great British counterpart, though. Like Isaiah Berlin, Sergei Eisenstein remained a mystery both for his fellow countrymen and countrywomen, and for his hosts elsewhere. Admired for his talent, innovativeness, and boldness by such celebrities as Charlie Chaplin, Theodor Dreiser, or Upton Sinclair in the USA, and later by Frida Kahlo and Diego Rivera in Mexico, Eisenstein began describing his films as “moving frescoes” anticipating such greatest film directors of the twentieth century as Pier Paolo Pasolini, Federico Fellini, Michelangelo Antonioni, and Andrei Tarkovsky all of whom were legitimate heirs to the legacy of Renaissance and Baroque art.

Eisenstein was forced to interrupt his enchanting life of travel and experiment abroad after Joseph Stalin made it clear that he had to return to the USSR. Long suspected to have abandoned the aesthetics of socialist realism, Eisenstein survived the Stalinist purges in a rather miraculous way. There is little doubt that it was only through the great success of his patriotic, not to say nationalistic, film Aleksandr Nevsky (1938), and Stalin’s favorite film Ivan the Terrible in particular (two parts, 1944–1945) that Eisenstein was left in peace and even received the Lenin Order and the Stalin Award. The same applies to a bunch of other fortunate geniuses, such as Mikhail Bulgakov, Sergei Prokofiev, Boris Pasternak, and Dmitry Shostakovich who miraculously survived in the Devil’s State.

Did Eisenstein and Berlin meet? Yes, they did. It happened once in Moscow after WWII. Through Davis Simanis’ film Escaping Riga we get a rich perspective on the twentieth century with all its paradoxes and disturbing complexities.