Tomboy-nerd no more, but still unwilling to ‘know her place’ 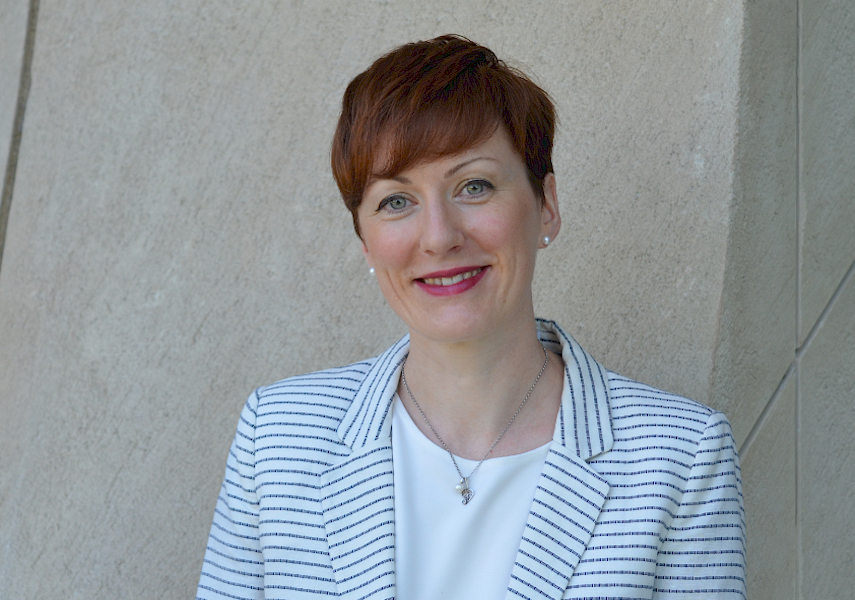 Every year, Yale, one of the world’s top universities, awards a prestigious Joseph P. Kazickas Fellowship to one most deserving and promising Lithuanian scholar. This year, out of numerous applicants, Yale University has chosen Dr Jolanta Mickute to participate at its Baltic Studies Program in New Haven, US. The Baltic Times has leaped forward to get acquainted with the winner of the prestigious award.

What kind of research will you be doing at Yale University?
I will be working on my first book, which is a major rewrite of my PhD thesis, “Modern, Zionist, Feminist: The Politics of Culture, Ethnicity, and Gender in Interwar Poland, 1918-1939.” At first, I tried to get support for this project in Lithuania. But when my attempts at securing research funding at the Lithuanian Academy of Science were unsuccessful, I “went international” and submitted my project proposal to a competition at Yale. As a result, I was awarded the Joseph Kazickas Baltic Studies Fellowship. This means that I’ll be given office space at Yale. I’ll have access to Yale libraries that buy the newest books all year round. I’ll be able to do research and writing without having to teach two to four courses per semester. But most importantly, I will be able to live on one salary. I know this sounds mundane. Yet scholars in Lithuania do not have the means or conditions to do research. Besides their full-time university positions, they have to do other jobs to keep their heads above water. So I’m grateful to Yale for this opportunity to do research without any distractions.

How did you choose the topic for your book?
First off, I focus on interwar Poland, which at the time included Vilnius, Lviv, Pinsk, and other cities that comprise parts of present-day Lithuania, Ukraine, and Belarus. So there’s a Lithuanian component to my topic. But interwar Poland, as it emerged from the rubble of empires, was a huge, novel, and complex republic with many ethnic groups. I love this complex character of budding democracies that emerged in 1918! We tend to forget that the East European democracies we have in 2016 are as complex and fledgling as they were in 1918. More than anything else, the democracies of 1918 tried to build themselves on compromise and co-operation, however unsuccessfully. Jews as a minority and their women, as a minority within a minority, were part of this complicated narrative about nation building. My hope is that my book can reveal how dooming it would be for East Europe to take the same ultra-nationalist path in 2016 (as it did after two decades of self-rule in interwar years). History clearly shows us that democracies aren’t democracies anymore without diversity.

Why do you focus on Jewish history? Are you of Jewish background?
You’d be surprised how many people ask me this question. Usually, I answer, “I am Lithuanian by descent.” I know this answer may be interpreted in different ways. According to popular belief, a Lithuanian speaks the Lithuanian language and embraces the Catholic creed. A “true” Lithuanian also must subscribe to the nationalist version of Lithuanian history, one that tells all about the glories and none of the infamies of her nation. I speak Lithuanian and I am Catholic by faith, so I would seem to fit this definition. Yet I have a broad, inclusive understanding of Lithuanian identity. I think that a Lithuanian can be Jewish as much as Catholic or Protestant or Eastern Orthodox. In my opinion, a Lithuanian citizen can speak multiple local languages: Lithuanian, Polish, Russian, or Yiddish. Lithuanian citizens of Jewish faith have been part of Lithuanian history since the 14th century. So as a Lithuanian, I am doing a history that’s close to my heart.

How did you become a historian? Was it your childhood dream?
As a child, I wanted to be many things: an astronaut, a pilot, a doctor — all those things that children hear from adults and parrot when asked this question. Only around the 10th grade did I formulate an answer I could claim as my own. I wanted to be a professor. I just didn’t know of what discipline. You see, I was not a regular bookworm. I was a tomboy and a nerd packed in one. I enjoyed singing, dancing, running, swimming, and playing basketball as much as I liked books. After high school, I ended up applying to the English Department at Klaipeda University and moved to Vilnius University for my graduate studies. There, at Vilnius, I discovered East European Jews, the Ashkenazim. A former Yale professor was teaching Yiddish culture courses at Vilnius University at that time. He noticed my growing fascination with Ashkenazi culture and suggested I apply to Oxford. I did and got in. That’s how it all started.

Was it challenging to study at Oxford? Were the standards much higher than in Lithuania?
Oxford was challenging all right. I would not say that the standards were higher. They were different. Oxford students take fewer courses but go much deeper into the subject matter. I had to read a book each week for each of the three courses I took each trimester. All in all, that was three books per week. Attendance was obligatory, unlike in Lithuania, so I engaged in expansive discussions of each book or any other assignment on a regular basis. At Oxford, a student is expected to work throughout the trimester rather than at its end, a few days before the exams, and the system has a way of making sure you do.

Why did you choose Indiana University in the US for your doctoral studies?
I had offers from many universities in the US. But as an East European, I was a liability in their eyes. In 2003, Eastern Europe was a big unknown to most American professors. They considered me an uncertain bet, so many schools didn’t offer full financial packages that would allow me to study full-time. Indiana University was an exception. Their generous offer was a sign that their Jewish Studies Program decided to bet on me. For that, I am genuinely grateful. Moreover, Indiana University had specialists in Jewish history in Eastern Europe and Russia whereas most other schools in the UK and the US focused on Western Jewry. I wanted to study the Jews that came from where I was from. And I had the linguistic skills to do it: by that time, I knew Yiddish, Russian, and German. So my PhD studies at Indiana University turned out to be a marriage made in Heaven.

Did you miss anything from Lithuania while living in the UK and the US?
My homesickness manifested itself in unexpected ways. The East European Jewish food in NYC, for instance, could bring tears to my eyes because it smelled like home. Although Jews don’t eat pork, in all other ways the Ashkenazi cuisine is similar to that of Lithuanians.
At first, I felt very critical of the Anglophone ways of interaction and maintaining friendships. But with time, I realised that basic human values are the same, only ways of practicing them differ from culture to culture. I took to learning the American ways, which was key to success in both my personal and professional relationships.
Funnily enough, distance has also tested my friendships in Europe: I retained many though not all of my old friends at home.

Why did you decide to come back to Lithuania after 10 years abroad?
My ageing parents, my two brothers, and most of my close friends live in Lithuania and Poland. Their love and care is something I cannot do without. It is fun to have a breathtaking professional life but what is it worth without the people you can share your successes with? I also wanted to give at least a little something back to my country, which gave me my undergraduate education completely free of charge. While studying abroad, I came to value this gift.

Did you face any challenges reintegrating into Lithuanian society?
I won’t lie: the transition back was difficult. I went through a major “reverse cultural shock.” In the US, I got used to a more egalitarian and progressive attitude toward women, as well as a more responsible, engaged approach toward education (maybe because Americans pay for it). To Lithuania, I came back a fully grown-up, independent woman, so I had a hard time with the old-fashioned patriarchal norms that dominate our society and academia. I felt that as a young woman I was expected to “know my place” because “men know better.” Surely, many more men in Lithuania are in the positions of power but that does not mean they are there because they know answers to everything.

What do you do in Lithuania now?
I have taught at Vytautas Magnus University, but now I am on sabbatical because of Yale. I also work as an academic director at the nonprofit Ethnic Kitchen (Pasaulio virtuve) that does socially relevant art projects and cultural intelligence enhancement training, among other things. My collaboration with the Ethnic Kitchen started in 2014, when I joined a Lithuanian tour of the documentary “Ethnic Kitchen.” As an expert, I toured six Lithuanian towns with the film’s director and discussed the stories of immigrant women in present-day Lithuania, which the film depicts. In after-screening discussions, I addressed gender, racial, ethnic, and age-related issues facing Lithuania.

What did you learn during your tour around Lithuania with the documentary “Ethnic Kitchen”?
I learnt that people crave education, as long as it is presented in ways that are accessible. Nobody wants to be stupid. But the old educational methods don’t work well in our information age anymore. So the film, as an audiovisual medium, was a great starting point for discussing issues that are relevant yet sensitive. I also noticed that the film made many Lithuanians see themselves in the eyes of “others” for the first time in their lives. It was a breath of fresh air for them.

What do you want to accomplish as academic director of Ethnic Kitchen?
I would like to take education out of its ivory tower. Scholars often complain that so many people are poorly read and know little about their own country’s politics, literature, arts, and economics, but they actually do little to change that. They write books that are inaccessible to laymen; they teach only within the bounds of their schools and curricula. Unfortunately, our educational system does not reward those who teach, so many scholars are discouraged from teaching early on. But if we want to create a more integrated, civil society in Lithuania, we need to change our approach to education. That is what we are doing at Ethnic Kitchen.

What is your take on Holocaust remembrance in Lithuania? It seems to be a controversial topic nowadays…
It is controversial because it has not been discussed properly yet. Over the years, Lithuanians have been fed narratives that were fascist-nationalist, Stalinist, or had a blend of Soviet and nationalist elements. Lithuanian society has not even got the facts down yet. It is somewhat upsetting to see this in our age. That is why I have started putting together an article on Holocaust remembrance in post-1991 Lithuania for an American scholarly journal. While researching it, I understood that the found materials called for something larger than an article. I took them to the Lithuanian filmmaker Aiste Ptakauske who immediately suggested we make a documentary based on my findings. The documentary is now under development.