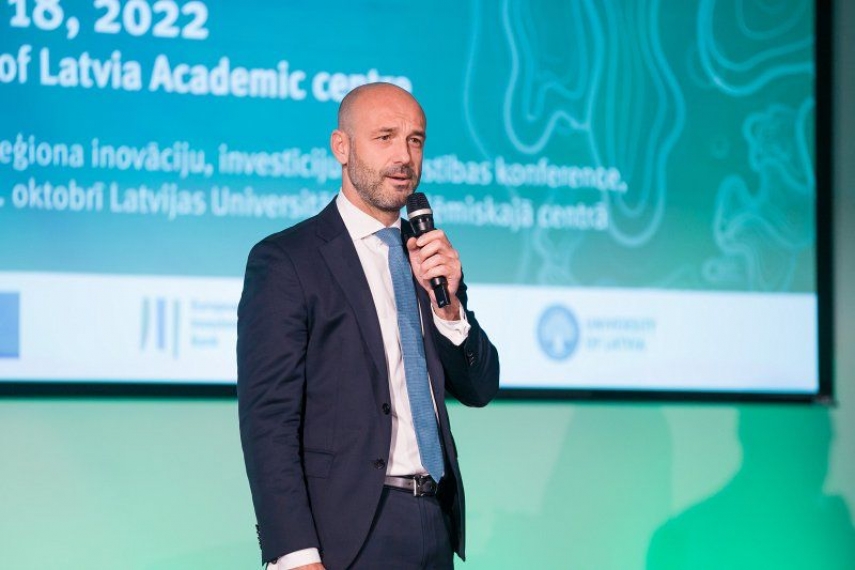 The Council of Europe Development Bank (CEB), which currently participates in financing the construction of the University of Latvia’s (LU) House of Letters, stands ready to continue supporting infrastructure projects in the Baltic countries, paying great attention to ensuring sustainable development and climate neutrality.

This was announced by Tomas Bocek, CEB Vice Governor for Target Group Countries, at the Baltic Sea Region Innovation, Investment and Development Conference.

"In order for the implementation of development projects to be even more successful, cooperation between various public development banks at different levels should be further improved, including between international financial institutions and national development banks," emphasized T. Bocek in his speech.

According to him, development and investment banks play a crucial role in tackling global problems, including mitigating the consequences of COVID-19, achieving the goals of climate neutrality, reducing inequality in the world, and providing modern education opportunities to every member of society.

"The closest goals of CEB in the Baltic region include projects targeted at climate neutrality and sustainable development," summarized T. Bocek.

At the end of 2017, co-financing of 12 million euros was granted for the development of projects of the second stage of the development of the Academic Centre of the University of Latvia, as part of which the House of Science was built, and the House of Letters is currently under construction. The LU development plans include uniting the majority of LU students, scientists and employees in the Academic Centre of the University of Latvia. It is a modern, motivating, and exciting environment with modern equipment, which will additionally promote competitiveness of Latvian education and make the way for new scientific discoveries and technologies created in Latvia.

On November 18, 2021, the CEB Administrative Council approved support for the third stage of the development of the Academic Centre of the University of Latvia, emphasizing the Health House and House of Sports projects and evaluating them as appropriate for receiving bank financing in the amount of 15 million euros.

CEB is a multilateral international financial institution with a strong social mandate in its operations. The bank was established in 1956 with the original goal of finding solutions to the refugee and migrant issues and continues to support projects with high social impact. It is focused on social cohesion and integration efforts in cooperation with regional and national development banks and other public institutions in all member states, so that the necessary support reaches the main target groups, including municipalities, small and medium-sized enterprises, projects for improving living conditions and healthcare in both cities and rural regions.

Currently, CEB provides loans and guarantees to its 42 bank member states. CEB invests in social projects that correspond to three main areas of activity – inclusive growth, support for the most vulnerable groups of population and a sustainable environment.

Latvia joined the Development Bank on 14 September 1998. According to the data of the Ministry of Finance, CEB has invested more than 373 million euros during its operations in Latvia.