To flourish and prosper, Latvia must not stop at what has been achieved - President Vejonis 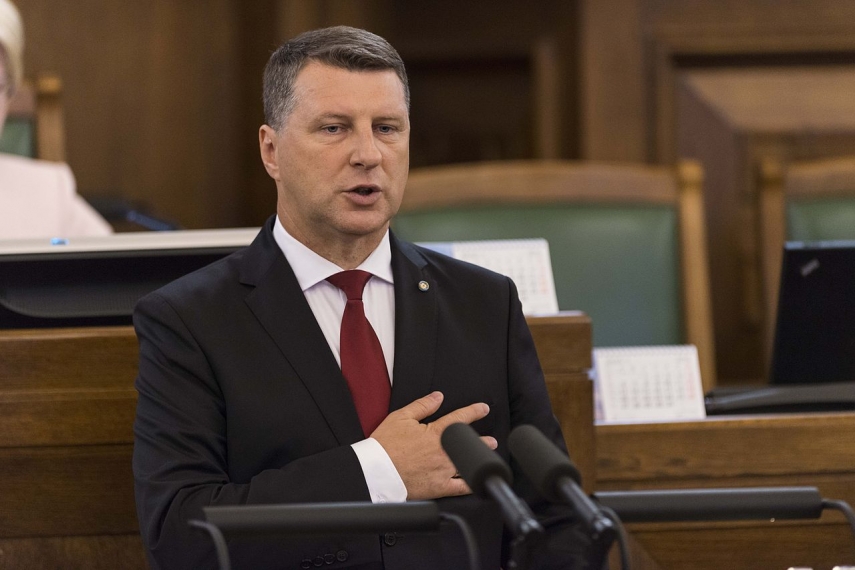 RIGA - For Latvia to flourish and life to become better, we must not stop at what has been achieved even for a moment, President Raimonds Vejonis said at his Independence Day address to the nation this evening.

The president noted in his speech by the Freedom Monument that today is the beginning of Latvia’s centenary year, while the century of our independence symbolizes a measure closer to eternity than a human lifespan.

Latvia is not just a name - it is faith in freedom that has been passed on from generation to generation and has cost the highest price on many occasions. It is also a land that cannot be found anywhere else. “Latvia is us, here and now,” President Vejonis said.

“At a time when our state was founded we had the idea of independence, we had our will to take this decision and we had our common strength to achieve it, to build everything from scratch,” the president said, stressing that today Latvians have much more.

“But for our land to flourish and life to become better, we must not stop at what has been achieved even for a moment. Latvia will be a long-liver, because we have freedom to build our own future, and this opportunity has to be seized,” Vejonis said.

The future, the president continued, belongs to our children and grandchildren, and the most valuable thing we can give them is good education. The president therefore called for building a knowledge-based society and supporting those who are fighting for progressive education and preparing our children for the future.

We are a European country, but there is still a lot work to do, Vejonis said, adding that in order to become a part of the active Europe, already in the nearest decade Latvia must turn from a recipient into a donor, from a shy EU newcomer into a wise policymaker. “With this self-awareness we would continue building Europe as an open and diverse model of democracy for the rest of the world,” the Latvian president said.

The president called on the people to celebrate the centenary of Latvia’s statehood and to live each day so that next November 18 every one could say “I am Latvia” with even greater pride and confidence.