Theatre makers from all over the world gave hope to Lithuanians 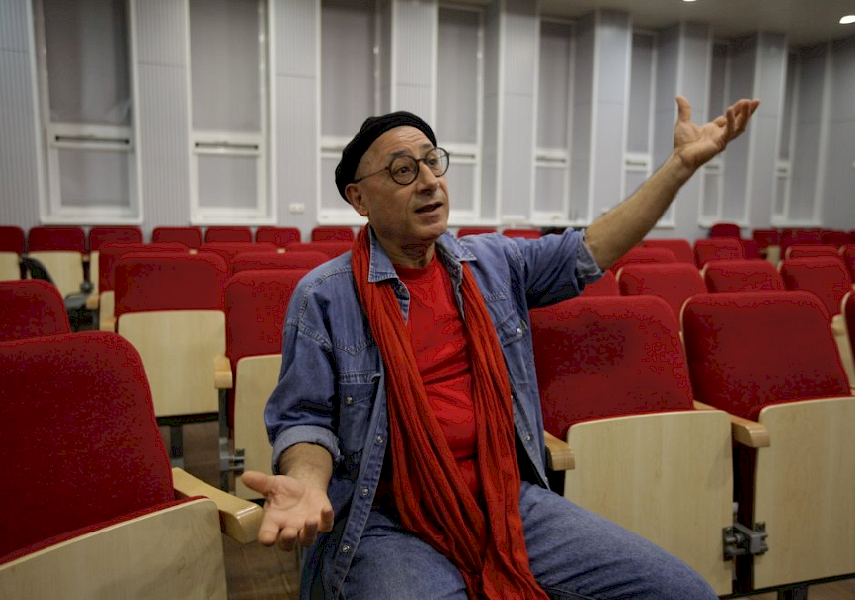 From February 28 to March 3, twelve theatre directors, actors, playwrights, and producers from all over the world ran workshops for high-school students and cultural workers of Rokiskis, a small town in the North East of Lithuania, with a population of 15,000 people. The main goal of the workshops was to empower youth and cultural workers of Rokiskis to create positive change and innovation in their communities. The twelve theatre professionals who facilitated the workshops were from England, Scotland, France, Sweden, Germany, Bulgaria, Hungary, Egypt, Algeria, Iran, and the USA. They all were members of the international theatre makers’ collective “The Fence”.

Network that unites 250 members from 50 countries
“The Fence” is a global network of playwrights, directors, producers, actors, dramaturges, translators and other theatre professionals who make playwriting happen. Established in 2003, the network comprises 250 members from 50 countries. “The Fence” runs network meetings on average twice per year.
During the 14 years of its existence, the network held 23 meetings in the UK, Hungary, Serbia, Austria, Finland, the Netherlands, Turkey, Romania, Germany, Guadelupe, France, Morocco, Italy, the USA, and Kosovo. These meetings typically feature 15—50 visitor members and a similar number of home-based members of “The Fence”. The main goal of the meetings is two-fold. On the one hand, visitor members want to meet playwrights and other theatre makers from the host country, learn about their systems, structures, opportunities, and challenges. On the other hand, theatre professionals from all over the world come together to pursue peer-led professional development activities that focus on how to operate as an artist in general and a theatre maker in particular, in the rapidly changing social, economic, political, and cultural landscape of the world.

Striking similarities between Lithuania and Morocco
A member of “The Fence” since 2004, I have been to seven semi-annual meetings of the network in the UK, Austria, Turkey, Finland, and Morocco, the latter being the most inspiring of them all. In 2012, we gathered at Mohammed V National Theatre in Rabat, because the theatre asked us to run a week of master classes and workshops for Moroccan students of acting, directing, and playwriting. As we worked with the group, I slowly started realizing that theatre’s place in Moroccan society was very different from the place it had in the West. In Morocco, professional theatre was neither strongly encouraged, nor supported by the government. What was supported was very prescriptive and predictable. It seemed that the Moroccan Government had a very particular taste when it came to theatre. Everything that was not to that taste was not welcome.

The productions that I saw in Morocco reminded me of the “barn theatre” that was popular in Lithuania at the beginning of the 20th century. At the time, Lithuania was a part of the Russian Empire that forbade any public use of the Lithuanian language, including press, events, performances, and any other kind of gatherings. But, Lithuanians would gather in empty barns to put on collectively devised shows that were a way to preserve, honour, and celebrate Lithuania, thus resisting the oppressor. This spirit of resistance became a defining feature of Lithuanian professional theatre during the period of Soviet occupation.

Theatre makers empower Lithuanians
In Morocco, we started our workshops with improvisation and storytelling exercises that first and foremost required self-reflection and openness. At first, our workshop participants almost froze. They were afraid to tell us what they felt, thought, or dreamt of. They always wanted to please us, as well as their classmates. But making theatre and art is not about pleasing others. It is about breaking through fear of judgement and opening up to others as well as oneself. When we open up, magical things start happening. Our uniqueness and individuality start shining through, on the one hand. But on the other hand, that individuality is so rich, that many other people can relate to it. It was a pure joy to witness how in the course of the workshops our students started opening up, discovering their individual strengths, and believing in their powers to create and change the world around them. I wanted to give a similar experience to my compatriots. Hence, I organized the 24th meeting of “The Fence” in Rokiskis.

In Rokiskis, theatre makers from all over the world worked with students of Juozas Tumas-Vaizgantas High-School and cultural workers: directors of various cultural centres in villages around Rokiskis. All workshops had a common theme: dreams. Having discovered how many people emigrate from Lithuania every year (over 1 per cent of the entire population), guests from abroad wanted to look deeper into this phenomenon. In their workshops, they wanted to find out what people of Rokiskis dreamt of, so that they could not get in that place where they lived.

Lithuanians had to overcome their insecurities
At the very beginning of the first workshop for cultural workers, there was an air of scepticism and even slight hostility in the room. Workshop participants greeted workshop facilitators with a series of complaints: it was Fat Tuesday, they had a lot of events to supervise, and thus wanted to cut the workshop short. The facilitators agreed, because they were there for the participants, after all. Moreover, they had worked long enough to know that hostility is but a sign of insecurity. One of the reasons for this insecurity became apparent very soon: none of the cultural workers of Rokiskis spoke English. They were afraid that they would not be able to explain themselves properly or understand what workshop facilitators would be asking of them. Communicating through an interpreter was not something that came naturally to this group of people. However, it eventually turned out to be quite comfortable.

The facilitators kicked the workshop off with improvisational exercises that required listening and collaboration. From the very beginning of the workshop, it was very obvious that the mission of preserving arts and culture in Lithuanian villages was entrusted entirely to women. There was not a single man among the workshop participants. But did these women do their mission justice! They ran puppet theatres for children, drama societies for youth, vocal ensembles for women, and folklore clubs for everyone who was willing to sing and dance. To be able to make their ends meet, all the women had to have a few jobs, but they did not seem to care. When asked what they dreamt of, the women replied, ‘We want more culture and creative people around us’.

Devotion of Lithuanian cultural workers can inspire the world
‘Having worked with both cultural workers and high-school students, I was surprised to discover that mature workshop participants had many more dreams than the youth’, noted Bulgarian director Dimitar Uzunov. When asked why they had such a hard time to come up with a list of dreams, students of Juozas Tumas-Vaizgantas High-School replied that they were afraid of being judged. ‘I am surprised to learn that’, commented one of the cultural workers from the workshop. ‘I thought that young people would find it easier to communicate and open up in the workshops. They do not have a language barrier, for one, whereas I always have this inferiority complex about being behind the times. But these workshops have given me wings. Now I know: what I have been doing is valid. And I can do so much more with the knowledge I got here’.

In the course of the workshops, inferiority came up in conversations quite a few times. For some reason, people in Rokiskis did not feel like they had much to offer to the world. Yet, Kazem Shahryari, an Iranian-born writer and director from Paris, was fascinated by the generosity and passion that he saw in the cultural workers of Rokiskis. ‘I was amazed by the work these women do!’, he exclaimed, ‘They are so generous, so devoted, so present to their communities. They are the definition of humanity. I would like to make a documentary about these women. There are so many countries like Syria, Iran, and Iraq in the world where people are in dire need of hope. I believe that the work that these cultural workers do for their communities, and the faith with which they do it, can show to international audiences that humanity has still got a chance’.