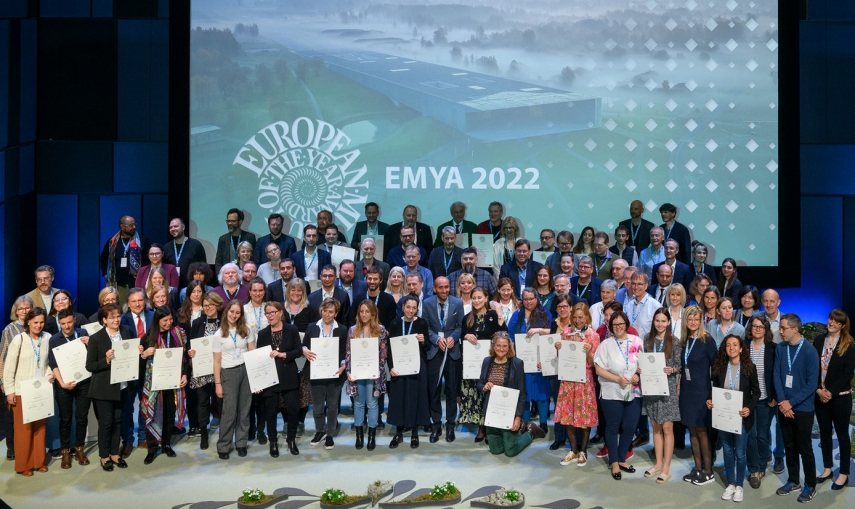 The European Museum Forum has announced the winners of the European Museum of the Year Awards for 2022. The winners in different categories under the EMYA scheme were presented on the last day of the EMYA2022 Annual Conference and Award Ceremony that was held on 4-7 May 2022 in Tartu, Estonia.

Organised by the European Museum Forum and hosted by the Estonian National Museum, a museum being stunning  for its size and the immensity of artifacts (over 1 million of them are on display), the event took place in a traditional EMYA format with a physical, rich and intense annual conference and award ceremony and brought together members of the EMYA community including candidates, partners and friends.
This year, the main theme of the conference was defined as “Museums Addressing Local and Global Issues in and with Their Communities”.
The European Museum Forum expresses its gratitude to the 60 nominated museums who kept faith with EMYA in applying and in welcoming the judges in the unusual circumstances of Covid-19. Special thanks go to our sponsors and partners for their continuous support for EMF through these difficult years.

THE EMYA – EUROPEAN MUSEUM OF THE YEAR AWARD
Presented by Amina Krvavac, Incoming Chair of the EMYA Jury
The European Museum of the Year Award goes to a museum which contributes profoundly to our understanding of the world as well as to the development of new paradigms and professional standards in museums.
The winner of this year’s main award is based in a very old building with many layers of difficult personal and collective stories associated with people who have been stigmatized and excluded from society. It is an innovative social project realised through the museum medium that stands out as a centre of excellence for its work. It explores the nature of the human mind in a uniquely innovative way and epitomises the power of museums in the social fabric. It is a truly inspiring human-centred institution that emphasises the experience of people who are considered ’different’ and helps citizens find new answers about the human condition and cultivate new seeds of hope for a better humanity.
The European Museum of the Year Award 2022
Museum of the Mind, THE NETHERLANDS

THE COUNCIL OF EUROPE MUSEUM PRIZE
Represented by Senator Roberto Rampi, Rapporteur, Council of Europe
The Council of Europe Museum Prize is awarded to a museum that has contributed significantly to upholding human rights and democratic citizenship, to broadening knowledge and understanding of contemporary societal issues, and to bridging cultures by encouraging inter-cultural dialogue or overcoming social and political borders.
Selected by the Culture Committee of the Parliamentary Assembly of the Council of Europe (PACE) on 3 December 2021 and awarded at a special ceremony that took place on 26 April 2022 in Strasbourg’s Palais Rohan, the prize was given to Nano Nagle Place, Cork, IRELAND, an institution and a museum which continues to evolve, adapt and renew itself with its surrounding society. At the same time it remains true to its values of compassion and justice, to its centuries old purpose of serving its communities and caring for the underprivileged, the excluded, the disenfranchised, and supporting them towards agency - whether their vulnerability is rooted in old-fashioned poverty, in the marginalization of forced exile, or in more personal and individual factors.
The Council of Europe Museum Prize 2022
Nano Nagle Place, Cork, IRELAND

THE PORTIMÃO MUSEUM PRIZE FOR WELCOMING, INCLUSION AND BELONGING
Presented by Jose Gameiro,  the Municipality of Portimao, Portugal
The Portimão Museum Prize for Welcoming, Inclusion and Belonging celebrates a friendly atmosphere of inclusion, where all elements of the museum, its physical environment, its human qualities, its displays and public programmes, contribute to making everyone feel they are valued and respected and belong in the museum.
The museum which has won this award has become a strong brand of the institution to which it belongs. It combines innovative, open minded, dialogic presentations which reflect on what the new missions and visions of a university museum should be. With all its exhibitions and services, it fulfils brilliantly its social function and demonstrates how a university can benefit from its museum to serve society by forging knowledge with the enthusiastic participation of the public which clearly feels very welcomed in this museum.
The Portimão Museum Prize for Welcoming, Inclusion and Belonging 2022
University Museum of Bergen, Natural History,  NORWAY

THE SILLETTO PRIZE FOR COMMUNITY PARTICIPATION AND ENGAGEMENT
Sponsored by the Silletto Trust
The Silletto Prize for Community Participation and Engagement celebrates a deep, continuous and empowering involvement between a museum and its stakeholders, that places the museum as a point of orientation and reference at the centre of its communities, whether these be local, national, global or otherwise defined.
The museum which has won this award is a people-centred museum with very low budget but big heart, loads of energy and an active participation of the local community. As a museum example, it stands out for its personal story of resilience as it managed to revert its hopeless future into a new path of growth thanks to local support. It demonstrates remarkably how inter-generational work and passing knowledge and skills on to younger generations can inspire and encourage a revival of artisanal traditions, with focus on the history and manufacture of footwear and shoemaking.
The Silletto Prize for Community Participation and Engagement 2022
Museum of Footwear and Industry, Inca, SPAIN

THE MEYVAERT MUSEUM PRIZE FOR ENVIRONEMENTAL SUSTAINABILITY
Presented by Frank Boot, Director, Meyvaert
The Meyvaert Museum Prize for Environmental Sustainability is conferred on a museum which shows an exceptional commitment to reflecting and addressing issues of sustainability and environmental health in its collecting, documentation, displays and public programming as well as in the management of its own social, financial and physical resources.
The museum which has won this award is a new museum that works closely with the community as a centre for creative and sustainable culture and art. This museum is part and parcel of a local identity that is deeply associated with an artistic tradition of both local and international appeal. In fact, it has brilliantly managed to preserve legacy of this tradition not only as a factory and a brand but also as a hub of intangible heritage and creativity for the making of glassware.
The Meyvaert Museum Prize for Environmental Sustainability 2022
Holmegaard Værk, DENMARK

THE SPECIAL COMMENDATIONS
Presented by Metka Fujs and Atle Faye, EMYA judges
Special Commendations are given to museums that have developed a new and innovative approach in specific aspects of their public service and from which other European museums can learn.
Six special commendations were given by the Jury in 2022.
-
This special commendations goes to an outstanding museum dedicated to science, art and critical thinking, where visitors are invited to discover that science is born out of doubt and imagination. GUM inspires its visitors to reflect on the plurality of meanings and develop scientific literacy in a fascinating and captivating way.
Ghent University Museum, BELGIUM
-
The following special commendation goes to the largest science centre in Germany that offers a multi-sensorial experience to its visitors and seeks for their active involvement to discover the world that surrounds them and reflect on their role and place in it. Innovation and promotion of the humanist worldview are at the core of its work.
Experimenta, GERMANY
-
The next commendation goes to an archaeological museum with a very long history which proactively looks for new ways to engage with the widest possible audiences.
By removing any existing physical, mental or psychological barriers, it is an example of excellence that promotes a visitor-centred approach to museology and curation.
Sigismondo Castromediano Museum, ITALY
-
The next special commendation goes to a museums which has created a new interpretative approach for a biographic house and projects how a good job can be done with limited resources and a small team of curators.
Nicolaus Copernicus House,  POLAND
-
The next commendation goes to one of the oldest and most prestigious museums in Sweden with a focus on the indigenous people in the Nordics, the history and the future of ice and the natural environment. Its current work showcases the impact that there will be from the changing climate, the global warming and the melting of the ice on the people who live in the Arctic.
Nordiska museet, SWEDEN
-
This special commendation goes to a small size museum that has been developed as a learning environment for everyone. Very inclusive in its philosophy, policy and design, it projects the 200-year-old history of education for the blind by offering diverse sensual and practical experiences for all its audiences.
Swiss Museum of the Blind, SWITZERLAND
-
The last special commendation goes to a  remarkable regional museum with strong ambitions for its cultural, educational and social effects. With outstanding exhibitions and easy access for all, it has created a new cultural asset for its city and region and is an active advocate for the social change it can bring to its communities.
The Box, Plymouth, UNITED KINGDOM

ABOUT THE ORGANISER – EUROPEAN MUSEUM FORUM AND THE EUROPEAN MUSEUM OF THE YEAR AWARD
EMYA has proved to be the longest running and most prestigious museum award in Europe and provides an important platform for benchmarking, networking, exchange of reflections, experience and skills across the wider continent of Europe.
The European Museum Forum (EMF) provides the legal and organisational framework for the annual European Museum of the Year Award scheme (EMYA).
Overseen by the European Museum Forum, since 1977 EMYA has been dedicated to promoting innovation and excellence in public quality in museum practice, encouraging networking and exchange of ideas and best practices within the sector. EMF/EMYA works within an overall framework of a commitment to citizenship, democracy and human rights, to sustainability, to bridging cultures and social and political borders.
Museum candidates are either new museums, first opened to the public within the past three years, or established museums that have renewed their organisation and completed a substantial programme of modernisation and extension of their buildings and galleries.
Over the years the EMYA scheme has developed into a series of different awards, each with their own specific profile.

ABOUT THE HOST – ESTONIAN NATIONAL MUSEUM
The Estonian National Museum, awarded by the EMYA with Kenneth Hudson Prize in 2018, was founded in Tartu in 1909 on the initiative and with the support of the nation – with the task to protect and develop the history and culture of Estonia.

As in many other European countries, primary importance was attached to preserving the old, fading peasant culture. Also considered essential was gathering and looking after artifacts contributing to better understanding of cultural development, archaeological findings, old coins, books, manuscripts and historical records.

Today, Estonian National Museum preserves the feeling of continuity and tradition. The museum is the generator and developer of cultural dialogue which links the past and the future. ENM`s role as a centre of ethnological research is to record, study and interpret culture as a way of life, taking into account its periodical, spatial and social diversity. The Museum's function as a contemporary cultural and tourist centre is to show Estonian culture's uniqueness and primeval power of creation to every Estonian and visitor.