The story of Latgale's unofficial flag 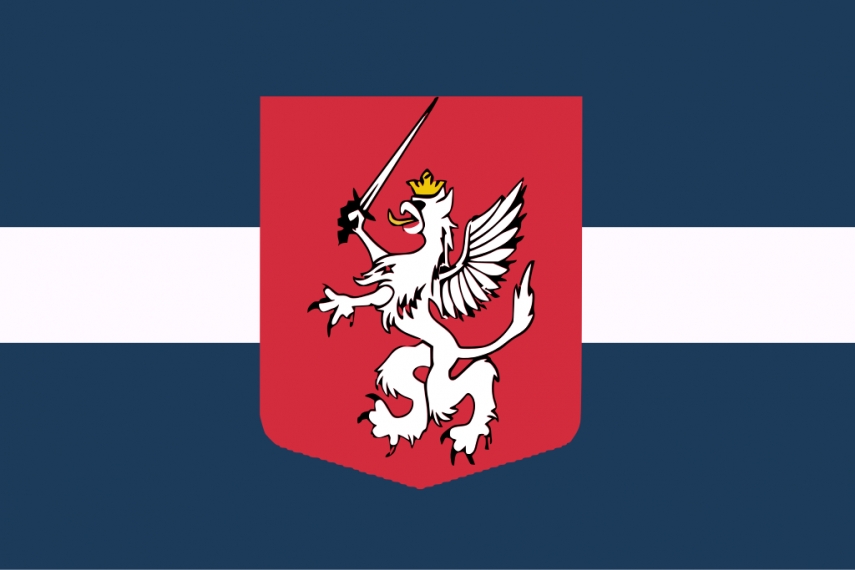 The unofficial flag of Latgale, created by Māris Rumaks

Two weeks ago, attention was drawn to Latvia’s south-eastern region, Latgale, when pictures were posted on social media sites, claiming the existence of a “Latgale People’s Republic”. Latgale, which borders Russia and Belarus, has a large Russian population, but the Latvians who live there also have their own language – Latgalian – and a culture and tradition distinct from much of the rest of the country. Some of the pictures featured a flag with “Latgale People’s Republic” stamped on it in Russian; others showed a map in which Latgale was physically separated from the rest of Latvia, and represented by a different flag. For the full story on this, see our previous article on the subject. But where did this “Latgalian” flag come from? In this article, Katrīna Žukova traces the flag's long, strange history.

The unofficial flag of Latgale, which has been used by pro-Russian activists for the flag of the “Latgale People’s Republic”, is a recent creation, but has already become attached to the region and its patriots. As the flag does not have official status, national authorities cannot use it; what’s more, the flag symbolises the aristocracy, something which is not acceptable in modern Latvia.

The creator of Latgale’s unofficial flag, Māris Rumaks, revealed to Delfi that he first had the idea of creating a flag after a group of Suiti [a small, distinctive ethnographic group of Catholic Latvians living in Western Latvia] ordered a copy of their flag from his company in Riga. It was then that the idea came to Rumaks of demonstrating that the Latgalians also have their own flag. He started researching symbols and coats of arms used in Latgale.

Rumaks found that the coat of arms of Inflanty Voivodeship, also known as Polish Livonia [an administrative district of the Polish-Lithuanian Commonwealth in the 17th-18th centuries that included parts of Latgle] showed a griffin wearing a crown, and he decided to use this in creating the flag.

He chose blue for the colour of the flag, because to Latgalians blue represents the aristocracy; Rumaks also pointed out one of the most magnificent villaines [a type of colourful shawl traditionally made in Latvia] that have been found is the villaine of Stāmeriena, which is decorated with many little rings of authority, thanks to which it has preserved its dark blue colour.

He chose the proportions of the bands on the flag to be the same as on the Latvian flag to symbolise the fact that Latgale is one of Latvia’s regions. The same proportions are also used on the Livonian and Selonian flags.

The flag: a symbol of the region’s cultural history

The first time the flag was publicly raised was in summer 2010 at a sports competition for local police teams in Kandava. Many respondents have told Delfi that over the last five years, the flag has earned the recognition of Latgalians. Andris Slišāns, a member of the Latgolys Saeima society, said that the flag is often used by the local government. Some Latgalians wear badges featuring the flag – or put them behind the glass of their car windscreens. Some who fly the flag of Latvia every day also raise Latgale’s unofficial flag.

The chairman of Viļaka District Council, Sergejs Maksimovs, showed Delfi that on the flagpole outside the local government building, along with the flags of Latvia, the EU, Viļaka District and Viļaka itself, flies the unofficial flag of Latgale. Although he hasn’t noticed the unofficial flag outside private residences, Maksimovs proudly reported that a number of petrol stations do fly this flag, which they were presented with by the local government. Maksimovs explained that these was given to the owners for their courage in opening a new petrol station there, when a couple of kilometres away in Russia, petrol is half the price.

“This is a tragic situation” the head of the Heraldry Commission, Ramona Umblija, said regarding the use of the unofficial flag of Latgale. Edgars Pastars, an expert on national law, told Delfi that local governments are not permitted to use this unofficial symbol; national and local authorities have to use flags with coats of arms fixed by law. But national law doesn’t regulate private individuals – there are no legal barriers to them flying the flag.

“It’s not understood what local governments are trying to say with these actions, but private individuals have free rights of expression, which cannot be controlled,” said Pastars.

In 1930, Latvia passed a law regarding the coats of arms of the regions of Vidzeme, Latgale, Kurzeme and Zemgale, which the Saiema confirmed again in 2012. The aim of the law was to establish the coats of arms as cultural-historical symbols of Latvia protected by law. But, Umblija explains, this law does not concern the coat of arms that is on the unofficial flag of Latgale.

The Heraldry Commission representative said that in the 16th and 17th centuries, the coat of arms of the Duchy of Livonia, which at that time covered Vidzeme and Latgale, was a silver griffin on a red background. And so, initially at least, Vidzeme and Latgale had a common symbol, shown by Vidzeme’s coat of arms: a silver griffin on a red background; however, Latgale, the land of blue lakes, changed to a griffin in side-profile on a blue background.

Both experts agree that the crown which the griffin is wearing shows that the flag is a symbol of the aristocracy, and that such a symbol was unacceptable to the independent state of Latvia at the start of the twentieth century.

“Unfortunately, the Latgalians, who are so extremely keen on identity , are not interested in history. The current [unofficial Latgalian] flag has no connection with Latgale. This is the coat of arms of the Duchy of Pārdaugava. The thing is that the law did not approve the use of the Heraldry Commission’s flag. If the law had been passed, then such stupidity would not be allowed.”

Pro-Russian activists’ use of the flag

As under Latvian law it is not officially recognised as a flag, its creator also has no possibility of legal recourse against those who have adapted it. Rumaks said to Delfi that he had not patented the flag as a trade mark, because he did not intend to use it for commercial purposes.

“We Latgalians can only condemn those people who have written over our flag in Russian, and say that we have nothing to do with them”, said Rumaks.

Legal expert Edgars Pastars explained to Delfi that there are no laws stopping individuals from altering this flag as they choose, as long as this is “proper and not against the law.” Latgale’s unofficial flag uses a different kind of griffin from the national coat of arms, so the pro-Russian activists are not insulting a symbol of Latvia.

The expert explained that if someone publicised proclamations threatening Latvia’s territorial unity, whether on paper or elsewhere, this could be considered a criminal offence. However, to write “Latgale People’s Republic” on a flag and fly it outside a house is not an offence, if one is not using it with the aim of influencing the political process. In such a situation, the writing would have a different context. “The question is – where and in which context that would be used… context is important. In isolation, the inscription means nothing,” said Pastars.

Delfi has been informed that a picture has been put up for public viewing on Facebook showing a new flag with “Latgale People’s Republic” written on it, as well as a picture showing the possible territory of this “republic”.

The Security Police have been informed about the pictures listed earlier, and are carrying out checks, as they have identified people connected with the “Latgale People’s Republic” picture circulated on the internet.

This article originally appeared in Latvian on delfi.lv. Reproduced with kind permission of the author. Translated into English by Will Mawhood.