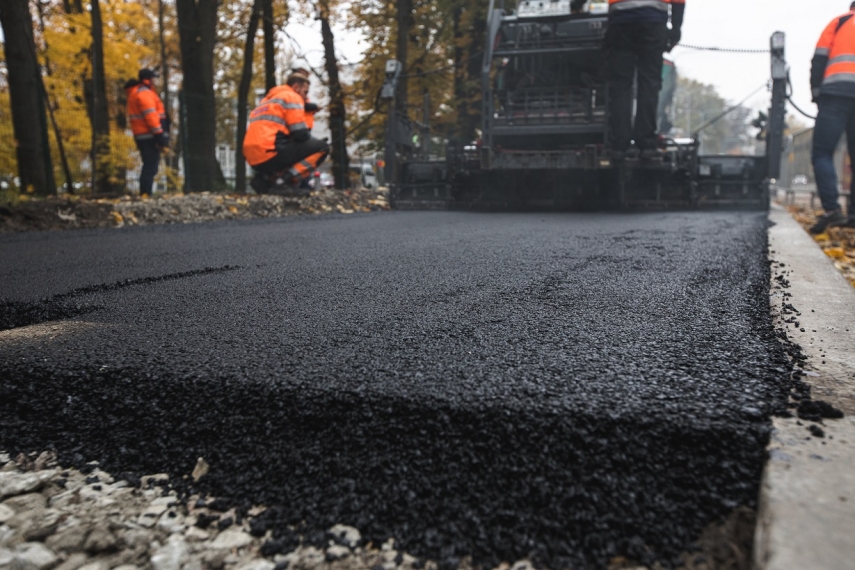 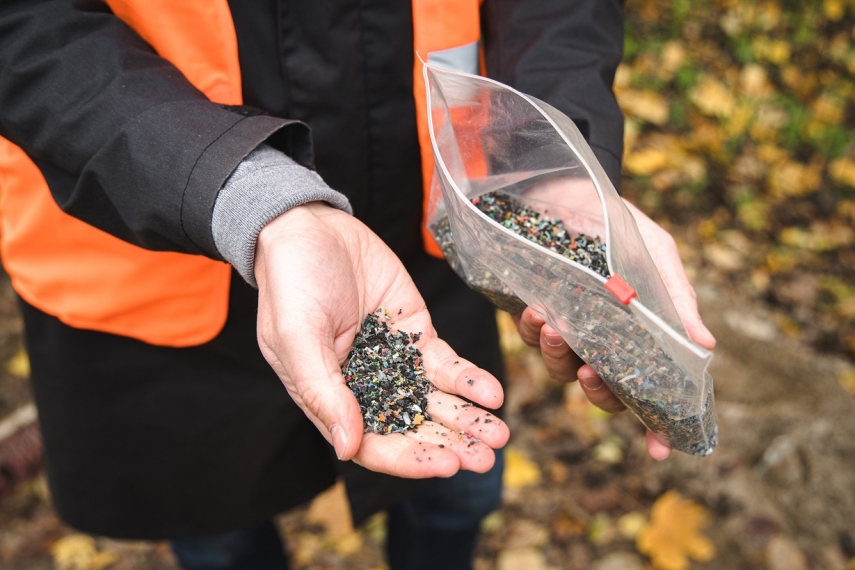 A new road section based on an innovative technology was completed in the centre of Tallinn Wednesday in the afternoon. The asphalt cover of this section containes processed plastic waste. A section of the Narva maantee built in front of the Embassy of China, the length of which is 75 metres and the width of which is 3 metres, is a part of the Reidi tee project, and the first road section of its kind in the Northern and Eastern Europe.

According to Veiko Veskimäe, the CEO of the constructor of Reidi tee Verston Ehitus, the Reidi tee project can be best described with the word “innovation”, one example of which is construction of the first test plastic road section in Estonia: “The build-up of plastic waste in the environment is a problem, and to a larger or smaller extent the entire world is looking for a solution to it. The use of plastic waste in road building is a very smart solution, as both non-degradable plastic and bitumen, which is an important component of the asphalt mix, are produced from the same raw material – petroleum.”

The innovative technology was developed by the Scottish company MacRebur, which runs a plant that uses special technology to process plastic waste into granules, addition of which allows to reduce the amount of bitumen used in asphalt. Plastic waste granules are melted into the asphalt mix at a sufficiently high temperature which allows plastic to melt uniformly without creation of microplastics – after expiry of the service life of asphalt the road material can be reprocessed and used in road building again.

According to Veskimäe, numerous tests have confirmed that the use of plastic granules in asphalt mixtures helps to improve the quality of the road surface. “Elsewhere in the world the roads built using the same technology have already received a lot of positive feedback, and we view the opportunity to use it in Estonia for the first time as a great challenge. We hope that from now on we will find more and more customers in the private and public sector of Estonia who want to contribute to solution of the problem with plastic waste while building roads and squares.”, added Veskimäe.

The co-founder of MacRebur Gordon Reid was also present to witness laying of the plastic road, and he hopes that the newly built road section will provide a good possibility to try the technology in local conditions, and will serve as the first step towards opening of a plant of the company in Estonia. “We believe that in the local climate, where there is a lot of humidity and the temperature can fluctuate between +30 degrees in summer and as low as -30 degrees in winter, excellent properties of our technology may perform at their best. Asphalt containing plastic is more flexible, and it has a higher tolerance to contraction or expansion caused by weather conditions, which reduces the number of cracks and potholes. As a next step, we hope to build the first plastic highway here and we view Estonia as a good location for building of a new plant, which would be able to supply granules produced from local plastic waste to asphalt producers as in the Baltic, so in the Nordic States,” explained Reid.

Ain Valdmann, the head of the Municipal Engineering Services Department of Tallinn, admits that the asphalt production technology based on the use of plastic waste, that was offered by the construction company, initially raised many questions. As a result of joint discussions, all such questions were answered, and the goal of the test road section is to demonstrate how the new technology works in our conditions. “The City of Tallinn has just submitted an application for the European Green Capital Award, the goal of which is to acknowledge the efforts that cities make in order to improve the environment and quality of life. If local plastic waste can be recycled for road construction and the quality of the road fits into our climate, this is an opportunity that the city could use more widely in the future,” added Valdmann.

MacRebur Ltd. (www.macrebur.com) is a Scottish start-up established in 2016, the founders of which are Toby McCartney, Gordon Reid and Nick Burnett. In the same year the company participated in the Virgin Voom competition of start-ups organised by Richard Branson, where it won the main award. The plant of the company is located in Scotland. Since 2016 roads built using MacRebur’s technology have appeared in England, Ireland, Slovakia, Switzerland, Canada, the USA, New Zealand, Australia, Bahrain, Saudi Arabia, Kuwait, South Africa, Turkey and Chile. At present the first road sections are also being built in Norway and a number of African countries.