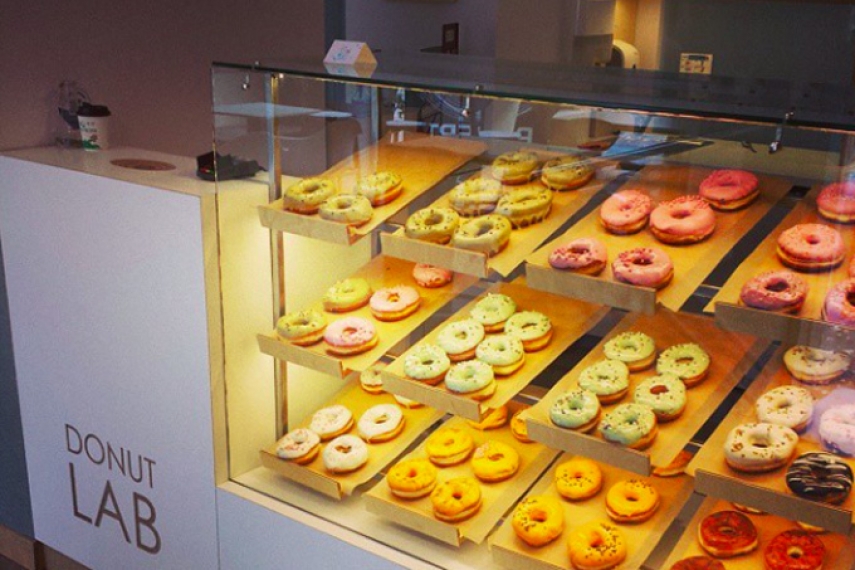 Over the years Vilnius has witnessed a number of trends in its restaurants and cafes. The most memorable one of recent years was a period where could indulge in a glass of wine on every corner and would find it hard to locate a place without the word ‘Vynine’ (English: winery) proudly displayed above the door, which lifted an establishment‘s status to that of “trendy.” Then came the hamburger trend, which could still be said to be living a golden age of sorts. But you may ask - what is there on offer for those suffering from a sweet tooth? Have no fear – donuts are the new trend, and are all the rage.

To my mind, there are two spots in town that are the best to indulge in this scruptous fare. The first one is Donut LAB just off of Lukiskiu Square at Jaksto Street 3. And it very much has the look of a lab with its minimalist Scandinavian decor. The donuts, however, have nothing Scandinavian about them. They are bright, and loud, and hard to resist. I hear the best one is a donut with custard filling, however, every time I get there they are already sold out. My favourite so far is the one with crunchy flakes, because the icing provides such a delightful contrast to the soft donut. The owners are actively promoting their brand and seem to really take feedback into consideration, even asking for suggestions about the icing!
The other place is M Donuts located on Savanoriu av. 46. They might not have such a good location as Donut LAB but they make up for it with their donut bus that can be found in two popular locations in Vilnius: Tymo Market near the Uzupis neighbourhood in summer and Lukiskes Square in winter. You cannot miss it because of the huge donut on the roof beckoning everyone to come closer for a bite. M Donuts fare is even more colourful and cheerful than Donut LAB‘s. This is the place where you imagine kids go in between their school breaks. Maybe precisely because of that I usually choose the donut with bubble gum taste which soon became my favourite there.