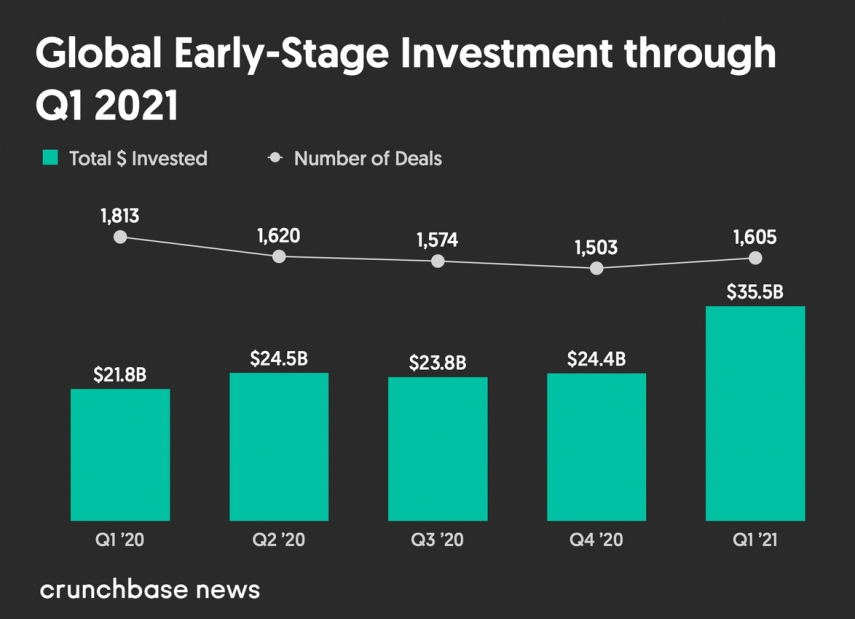 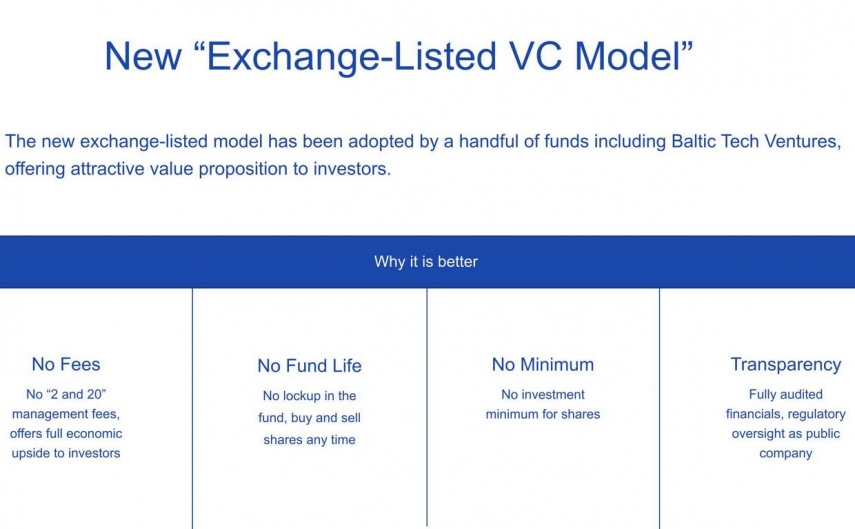 The rising tide of global venture capital has lifted a lot of boats, with more startups getting funded than ever before. And if the first quarter of 2021 is any indication, it's going to be another banner year. Crunchbase data reported global venture capital investment of $125 billion in Q1 2021, a 94% increase year-over-year. While low interest rates over the last decade have driven investors to the higher returns of VC, the pandemic accelerated technology investments. And as Prof. Scott Galloway wrote, recently, "The pandemic's most enduring feature will be as an accelerant of existing trends." While VC money has powered technological progress and trends for the last 60 years, the way venture funds work has not changed much.

Although VC has exploded as an asset class, it remains a walled garden for retail investors- only available to industry insiders. Usually, a VC firm will count institutional investors as its limited partners, like insurance companies or sovereign wealth funds. But for individuals, if a firm will even take your money, the barriers to entry into a VC fund are high, from investment minimums, long lockup periods, fees, and varying degrees of transparency. For individual investors, looking for opportunities on their own isn't easy due to the uncertain quality of deal flow, the burden of due diligence and vetting, the liquidity needed to invest in enough companies for sufficient diversification, and the lack of regulatory oversight. Today, individuals who want to get into VC are typically limited to joining an angel group or co-investing with people from their existing networks.

Innovators on the classic VC model have emerged to democratize the space, slowly but steadily cracking open the golden gates of VC's walled garden. One example is OurCrowd, a financial technology platform that provides accredited investors around the world access to global, high-caliber venture capital investment opportunities at scale. OurCrowd brings private markets investing to individuals, family offices, corporations and institutions by allowing individuals to co-invest in its funds or into its startups on a deal-by-deal basis. Meanwhile, any investor can buy shares in the London Stock Exchange-listed TMT Investments (LON:TMT) to gain exposure to the firm's entire portfolio. The publicly-traded venture capital firm Baltic Tech Ventures (NASDAQ:BTE1R) launched in 2020, providing its shareholders with exposure to its portfolio of early-stage opportunities in Estonia, Latvia, and Lithuania. Baltic Tech Ventures also operates an angel group of investors that can invest on a deal-by-deal basis. Another example of innovation in the venture space is the 2021 launch of an offering from private software company Carta, with a product called Fund Formation, which aims to make it easy for anyone to create a VC fund. But the universe of VC investment opportunities for individuals remains very small.

OurCrowd CEO Jon Medved told The Baltic Times, “Democratising VC is important because of the huge increase in the VC market and the rise of unicorns. Many investors want to get access to exciting tech companies before they go public. In prior decades, public offerings were often held for tech companies when they are much younger and thereby giving the regular investor access to their growth at an early stage when they could ride that success for some time. Today because the unicorns wait so long to go public, it is important to demand access to venture capital so the regular angel investor or accredited qualified investor can make serious investments in these startups before they go public.”

In the last 60 years, venture capital has been geographically concentrated in Silicon Valley. But for the first time, Silicon Valley's share of American VC firms, by number, is set to dip below 20% this year, according to PitchBook's 2021 US Venture Capital Outlook report. And in terms of the value of deal funding, North America led the world with nearly US $133B, as of 2020. But looking at the same year, Asia's deals were worth $87B, and Europe's hit $33.4B. That's also an increase from the $28.7B invested in deals in Europe just two years earlier, in 2018.

As VCs expand across the global economy due to the trend of remote work or simply seeking lower costs of financing companies, lower labor costs, and untapped opportunities, regional players have a chance to gain significance. To be competitive in local markets, VC firms will need niche knowledge of the target ecosystem and its region.

While the Baltic region was recently considered an emerging and even a marginalized region of merely 6 million inhabitants, it's moving rapidly into the mainstream. According to an Atomico report, Estonia has 4.6x as many startups per capita as the European average. And Index Ventures ranks the Baltic countries as the top 3 most startup-friendly countries in Europe.

The Baltics are increasingly competing with established tech innovation hubs like the Nordics, the EU, and Israel and attracting interest from foreign investors. Tera Ventures, a veteran seed-stage fund in the Nordics and Baltics, announced in April 2021 that it had brought in global limited partners in a €43M fund. Gerard Haddad, an angel investor with the Cornell University angel network and an investor in Baltic Tech Ventures says, “I have recently turned my attention overseas, where the Baltics have become a rapidly growing technology hub. The Baltic VC space is now producing many success stories.” Startup Wise Guys recently reported that the region has produced 5x more funding per capita than the CEE region's 14 countries. And for a good reason - McKinsey found that Eastern European B2B startups are particularly capital efficient - with 5.6x more revenue per equity funding than their US counterparts.

The watershed moment for the region was when Estonian startup Skype was acquired by eBay in 2005 for $2.6B. Although they moved their headquarters to the UK, the company's Estonian early employees invested back into their home country's startup ecosystem, funding and developing new companies. 70-80% of seed funding in Estonia in 2020 is said to come from founders or early employees of successful startups there, who re-invested in their home market and stayed put. That's according to a LinkedIn post by Ragnar Sass, Founder and CEO of Salto Network and one of the most active angel investors in the region. Baltic population outflow numbers as a whole have also slowed in the last few years.

Gene Zolotarev, a career executive in investment banking and asset management at prominent U.S., Russian, and Baltic commercial and investment banks, invested in venture funds for the last 15 years, mainly through his family office and participating in projects run by his friends and colleagues. Zolotarev says, "I have had some very interesting investments in the Baltic region. For example, we were fortunate to participate in early investments in some major Baltic success stories.  Back then, I joined a pool of investors that were good friends of mine and experts in the VC field and I used it as a learning opportunity. Today, my firm is leading seed rounds of our own."

In early 2020, this experience led Zolotarev to establish Baltic Tech Ventures, the region's first publicly traded venture capital firm with seven portfolio companies and a business angel group of roughly 300 investors. BTV recently completed a secondary public offering, attracting international investors from the UK, US, Israel, Monaco, Italy, and Switzerland and regional investors from Latvia, Lithuania, and Estonia. Hagith Malul, VP, Chief of Staff for Conversation Services and Head of Operations at LivePerson Israel, said, "I spent my whole professional life helping Israeli and international technology companies grow, and was immediately attracted to the BTV's business model and its investment thesis. The Baltic region tech startup ecosystem is rapidly developing and BTV has a unique value proposition; I was happy to invest in its share offering."

Accessible venture capital firms provide a glimpse of an evolution for the VC model, driven by democratization and diversification. In terms of democratization, any investor with a brokerage account can invest in a publicly traded venture firm, such as Baltic Tech Ventures, or TMT Investments. And venture firms also provide access by allowing individuals in their angel groups to co-invest in specific opportunities on a deal-by-deal basis. In terms of geographical diversification away from Silicon Valley, the US, and into the Baltic innovation hub, BTV is deeply enmeshed in the regional ecosystem.

While the Baltic states are proving to be fertile ground for investment into innovation, new models are making VC more accessible for retail investors. OurCrowd’s CEO Jon Medved told The Baltic Times that he is certain that democratized VC is part of a big trend. He said, “We are convinced that there will someday be many new platforms allowing many access to this asset class. We look forward to welcoming many investors from the Baltics into our growing worldwide community of investors.” And Baltic Tech Ventures’ CEO Gene Zolotarev said, “The Baltics are one of the most exciting regions for innovation. With the democratized venture firm model, we hope to bring the world’s investors to the Baltics - and Baltic tech innovations to the world.”

As today’s Baltic startups mature and new ideas turn into companies, there may be many more investors that have opportunities to be a part of their success - thanks to the firms leading the democratization of venture capital today.

Sophia Tupolev-Luz is an advisor to Baltic Tech Ventures and the managing director of Swordpen, a B2B communications advisory.